Jell-O salads were created by Mrs. John E. Cook of New Castle, Pennsylvania in 1904. By the 1950s, they had become so popular that Jell-O responded with savory and vegetable flavors such as celery, Italian, and seasoned tomato. Sadly, these flavors were dropped, but the trend continued. The 1964 Joy of Cooking has forty-three recipes for congealed salads, one with shredded cabbage, clam juice, and olives that Escoffier would applaud.

Though these salads are still popular in the upper Midwest and Utah (where Jello-O is the official State Dessert) they’ve disappeared from most American tables (or any other tables, for that matter). The 2006 75th anniversary edition of Joy lists four congealed salads alongside two savory aspics (a basic recipe as well as the ever-popular tomato) and two mousses (lobster and cucumber). Still, many people I know have something like a molded asparagus/cream cheese salad or a congealed cranberry relish on a holiday table.

This recipe is easy, delicious and oh-so pretty for summer lunch. Add one and a half cups boiling white grape juice to two (3-ounce) packages lemon Jell-O. Mix until gelatin is dissolved, and chill until thickened but not firm. Stir in sliced strawberries, fresh blueberries, raspberries and sliced seedless grapes. Pour into a 6-cup ring mold coated with cooking spray and refrigerate until quite firm, about 4 hours. Unmold onto a platter and serve immediately. 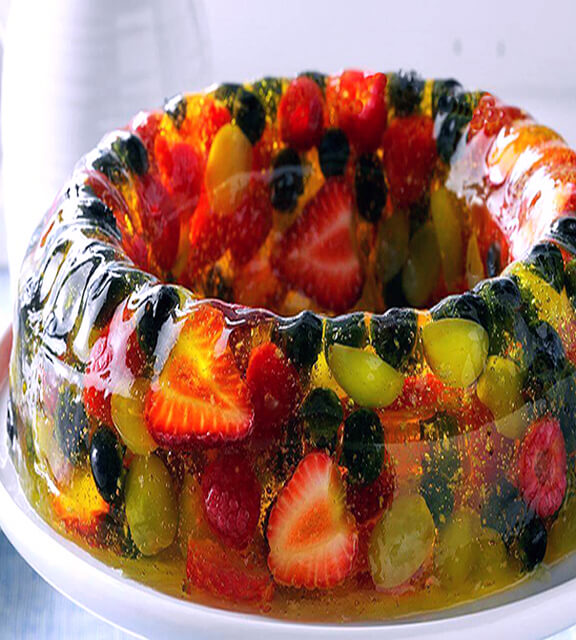