This recipe from a dear friend is the only one for a carrot cake I’ve ever used and the only one you’ll ever need. Though there is a tendency in most recipes to label alcoholic ingredients—in this case the dark rum—optional, but I consider the flavor essential to the recipe; even if you’re a teetotaler, the alcohol burns off in the cooking and good heavens you’re bound to know someone with a bottle about their house. I like a mix of gold and dark raisins and prefer salted pecans to walnuts.

Mix thoroughly ¾ cup vegetable oil and ¾ cup warm buttermilk with ¾ cup white and ¾ cup light brown sugar (you don’t have to pack it). Set aside. Sift together 2 ½ cups plain flour, 2 teaspoons baking soda, 2 teaspoons each ground cinnamon and ground ginger, a teaspoon salt and a couple dashes of nutmeg. Add half the dry ingredients to the oil/buttermilk mixture, and the rest alternately with 4 well-beaten eggs at room temperature. Add two cups grated carrots, about ¾ cup raisins, ¾ cup chopped nuts and a cup of drained crushed pineapple. Finish off with a tablespoon of vanilla extract and a generous slug of dark rum. Pour batter into an oiled Bundt or two 9 in. oiled and floured layer pans and bake at 375 until fragrant and springy. For the frosting, mix a pound of cream cheese and ½ stick butter at room temperature with powdered sugar to texture and finely grated dried apricot for that hint of orange.

Ham is the quintessential meat of the Southern table, featured in or supporting dozens and dozens of dishes across our sideboard. But there are hams and then there are hams.

The finest hams are dry cured. These hams can be eaten very thinly sliced, but they need to be soaked in pure water at least a day if baked for the table. These are often labeled country hams. So-called city hams, the kind you most often find in the supermarket, are wet-cured by injection of brine. Smoked hams are a variant of both, with smoke preserving and providing flavor.

Then you have the green ham, which is what your grandmother called a leg of pork that hasn’t been cured. You’ll find it sold as a fresh ham; you may have to look for it, you may even have to order one, but a green ham is no more trouble than any other kind, and it’s a worthy option to the nitrate-infused clubs you’ve been serving all these years.

A green ham should be covered in a rind and a layer of fat. Score the rind in a tight crisscross pattern with a very sharp knife and coat with garlic and sage, a little brown sugar, coarsely-ground pepper and sea salt; put sprigs of rosemary and coarsely chopped white onions with water to cover in the pan. Set the ham fatty side up on a rack in a heavy pan with enough water to just cover the bottom. Place in a high oven, right at 450. After thirty minutes, decrease the temperature to 350. For a ten-pound ham, give it three hours or until that little bone next to the big one wiggles freely. Turn the oven off and let the ham sit for at least another hour before carving. 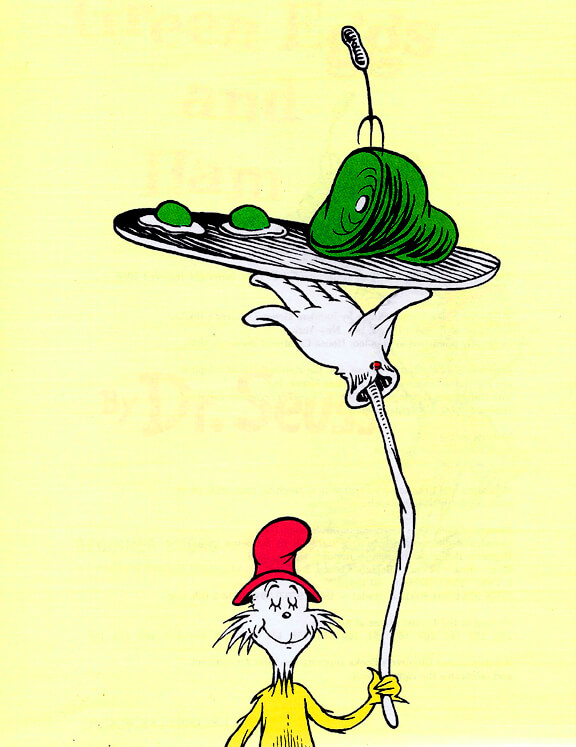 The opening of Tennessee Williams’ A Streetcar Named Desire on Broadway at the Ethel Barrymore Theatre on December 3, 1947 proved to be a watershed in the history of American theatre. The cruelty, agony, gritty dialogue and smoldering eroticism shocked the audience, but they responded with  prolonged, enthusiastic applause to Williams’ “poignant and luminous” story that, coming on the heels of his pathos-ridden The Glass Menagerie established him as the foremost figure in American drama and transformed Jessica Tandy as well as the then relatively unknown Kim Hunter and Marlon Brando into stars of the first magnitude.

Williams’ masterpiece, considered by many to be the finest American drama of the 20th century, became an international sensation with a string of dazzling national debuts in Mexico City and in Brussels in December, 1948, and the following year in Amsterdam and Rome—with sets designed by Franco Zeffirelli—in January; in Athens and in Gothenburg, Sweden—directed by Ingman Bergman—in March; and in Paris in Jean Cocteau’s adaptation, and in London—directed by Laurence Olivier—in October. (Olivier, apologetically, wrote to Tennessee: “I honestly think the play is a little long.”).

When Streetcar closed on Broadway in 1949 after a run of 855 performances, two distinguished road companies continued to bring the play to cities across the nation. The first road company starred Anthony Quinn as Stanley and Uta Hagen as Blanche (the film version with Vivian Leigh was released in 1951); the second road company, which staged the Mississippi premiere, featured Ralph Meeker and Judith Evelyn. Meeker assumed the role after a highly successful run as Henry Fonda’s understudy in Mister Roberts and went on to star in Inge’s Picnic (1954). His most memorable film role is of Mike Hammer in Robert Aldrich’s film production of Mickey Spillane’s Kiss Me Deadly (1955). You might remember Evelyn as Miss Lonelyhearts, the alcoholic spied on by James Stewart in Alfred Hitchcock’s Rear Window (1954).

The Mississippi premiere of Tennessee Williams’ A Streetcar Named Desire was held on December 12, 1949 at the Jackson City Auditorium. The performance was reviewed by the inestimable Charlotte Capers, the principal architect and most distinguished director of the Mississippi Department of Archives & History as well as a literary light in her own right. Capers’ review catches the power of the performances (though thinks Meeker’s Stanley as “too simian”), and after giving an Aristotelian justification to questions of, “Who would write such a thing?” (to achieve “a catharsis of the soul”) states that:

“To the audience that complained about the theme of the play, we would suggest that before buying tickets, they check the subject. Certainly it was not an evening of entertainment, and anyone who went expecting to be entertained was disappointed. There were a few moments of intense pity, shattered by misplaced laughs. We couldn’t place the blame here, perhaps the cast, perhaps the audience.”

With this Capers testifies that theatre-goers in Jackson were just as shocked as those in the seats at the Ethel Barrymore (almost precisely) two years before, and while perhaps not as enthusiastic, experienced the same catharsis of soul, the same revelations theatre provides in its highest forms. 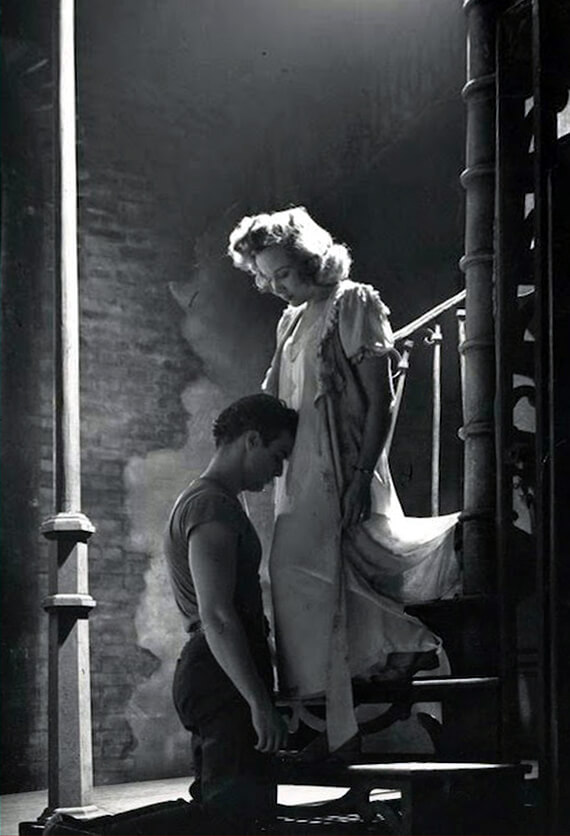 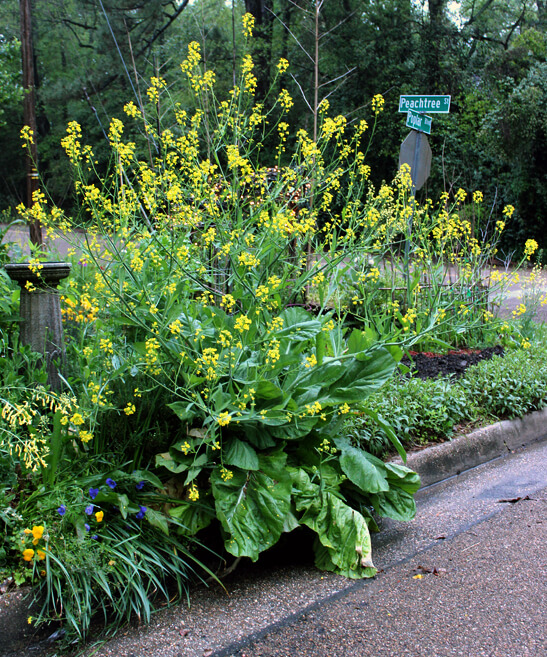 This light savory soup is good cool or warm, and such dishes are at their best on a spring or autumn table for a warm day or a cool night. The base is a blend of store-bought beef and chicken bone broth: The flavor is minimal, as is the color; it’s used simply for its texture.

Add three cups chopped fresh or two cups well-drained frozen spinach and two jars quartered marinated artichoke hearts with liquid, thyme, basil, chives and just a knife point of minced garlic and cook “with a smile”, meaning just at a simmer for about fifteen minutes, double that if the spinach is raw. Use a quart of oysters, the liquor too if clear, but if cloudy, rinse the oysters and dust with salt and pepper. You’ll often read that oysters should be heated “until the edges curl” before serving, but I suspect this is an echo of those gentler days when a hot soup was finished off in a tureen and brought to table, since oysters cook quickly and are soon firm through and through. Top with finely cut fresh scallions for a nice bite. 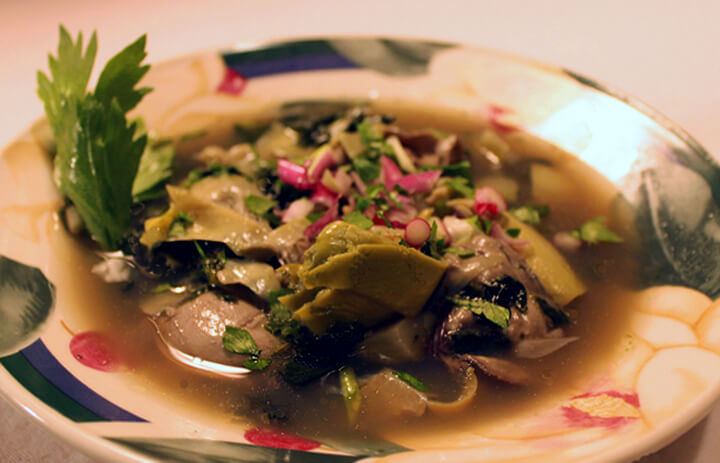 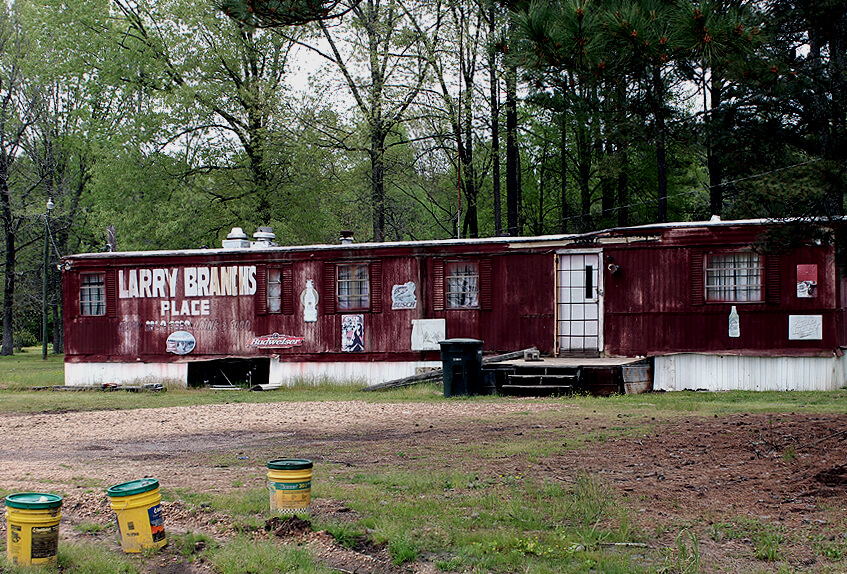 Several weeks ago, I received a query via the Sideboard from former Jacksonian Sombra Laubach:

“Would like the King Edward Hotel recipe for chicken thighs baked with thyme and onions, please. My Jackson Symphony Cookbook disappeared. This was a recipe in the cookbook that the King Edward Motel was famous for back in the 70s. It is a favorite of mine over the years. Thrilled the King Edward Hotel has been refurbished!! Thank you for the recipe in advance. Hope all is wonderful in Jackson, my hometown!!”

I soon received a similar request from Diane Flowers and went looking for the recipe. I have The Jackson Cookbook, a superb collection with an introduction by Eudora published in 1975, but kept missing the recipe until a neighbor who is a native Jacksonian pointed it out to me (Thanks, Margaret!) In my defense, the recipe is credited to the “Edwards House”—as opposed to the King Edward Hotel—and I’m not really sure why. Perhaps the hotel restaurant was called the “Edwards House” though given the suspiciously archaic phrasing the recipe may date back to the early quarter of the century, which makes it really special indeed, an indication of the level of culinary hospitality in the city at that time.

The recipe is a classic fricassee, chicken fried and braised, simple yet rich, with a sublime aroma, all characteristic of haute cuisine of the sort you’d expect to have found in an establishment such as the King Edward in its heyday. 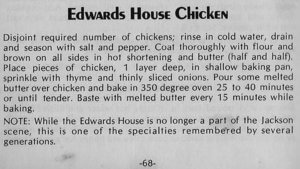 Sombra said she doesn’t bread her chicken at all, that the onions were sliced thick enough not to singe and that basting is crucial. Me, I used boneless thighs skewered and lightly floured (no drenching beforehand) with salt and pepper, the beautiful early yellow onions we have coming to market now and a mixture of green and dried thyme. Use a medium heat—the butter will burn if too hot—and give the chicken a good browning. I wilted the onions in the oil/butter before topping the chicken, drizzle with more of the mix and placed it in a medium (350) oven for about half an hour.