Throughout her career, Joan Crawford took great care in cultivating her public persona, which was a tight-wire act between that of a major movie star and an All-American mother. Ten years before her death, she published My Way of Life (1971), her blueprint for success, but her meatloaf recipe is a wretched failure.

“I use two pounds of ground sirloin, a pound of ground veal, and a pound of sausage meat…thoroughly mixed with three eggs, a bottle of A-1, a good lacing of Worcestershire, a lot of seasoned salt, and finely chopped purple onion and green peppers. I hide four hard-boiled eggs inside the loaf and before it goes into the oven I dribble over more A-1 and Worcestershire and seasoned salt so that a crust will form.”

While it’s not something that I’d cook (a bottle of A-1?), Joan’s addition of hard-boiled eggs is in line with most recipes from around the world; eggs contribute to the protein content and it also looks good sliced. Christina didn’t mention Joan’s meatloaf with the wire hangers, but I sure would have.

During his famously quoted expedition in search of Dr. Livingston, Stanley also said, “If we run out of food, we’ll eat bananas.” Sir Henry’s flippant dismissal of this vital foodstuff in lieu of boiled beef sums up the Brit empiricist mind.

But well before Stanley’s five seconds of Victorian condescension, bananas had been a staple in the southeastern quarter of the globe since before the days of Homo erectus. While European versions of the Expulsion have Eve offering up an apple (probably a Winesap; the Granny Smith is theologically impossible) as the principle instrument of temptation, many African, Asian and Oceanic interpretations depict Adam as succumbing to a nice banana instead (Eve had a rough cut, why not Adam?). These accounts also describe our primal DNA donors as masking their shame with banana leaves, which makes far more sense to me than that fig drag, even for Eve.

Bananas (Musa sp.) provide a perfect food for apes, naked or otherwise, and while their priapic fruit (along with cigars) has been subject to of all sorts of Freudian fun, sometimes a banana is just a banana, in which case it takes on more manageable proportions. The fruit (a type of berry, actually) grow upwards on huge stalks that can contain more than a hundred arrayed in a series of tiers.

Before Chiquita and other mega-growers began shipping bananas in chemically sterilized bunches, stores would impale whole untreated stalks on ceiling hooks to ripen. Given the number of nooks and crannies in these masses of vegetation, it’s unsurprising that the occasional tropical creature would piggy-back its way into a local market. My grandfather Jess kept a small country store that supported an endless series of banana stalks from the Cockrell Banana Company in Tupelo as well as a number of riff-raff and wayward in-laws.

Jess inspected any produce before he put it up for sale, and occasionally he’d discover some sort of exotic fauna cowering deep amid the bananas, usually a spider big enough to scare the bejesus out of any little old lady out to make pudding for the church social. He’d feed the spiders to the chickens out back, but once, to his great delight, he found a small tropical boa in a stalk and kept it in a glass gallon jar with some hay in the bottom for everyone to ogle at until he sent it to the University of Mississippi, where it enjoyed a long, happy career as a desensitizing agent for people with snake phobias. Jess once said to a ne’er do well cousin: “I got a cottonmouth moccasin into Ole Miss, but I can’t even get you into barber school.”

The fruit of the banana is a sublime canvas of starches, sugars and nutrients, and while potassium makes for a nice touch, from a cooking standpoint the starches and sugars determine its preparation as well as its selection. If you’re simply going to eat a banana, eat a ripe banana, not just some Johnny–come–lately you happen to pick up in the produce section. However tempting you might find those fruit, if you’re going to use them anytime soon they should be avoided: they may be firm, but they’re also bitter. It should go without saying that because bananas are sold in bunches that ripen simultaneously, size shouldn’t really be a key consideration. (You’re just going to have to trust me on this one.)

Maturation is a wonderful thing, people, especially when it comes to fruit. Good bananas don’t have a tinge of green upon them: they’re usually freckled and aromatic. They’re also less expensive because—sad to say—society’s obsession with youth extends even to bananas, and supermarkets probably throw away as many “over-ripe” bananas (meaning just the sort of quality fruit I’ve described) as they sell green ones. If you have to buy green bananas, keep them on top of the refrigerator until they ripen before using. 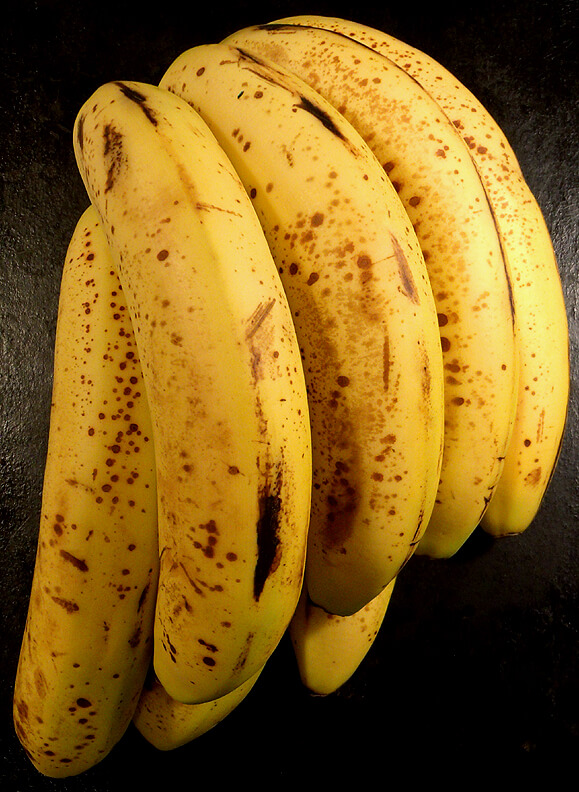