Don’t bring shrimp to a boil.; the water should sourer, “smile,” heated to that steamy, shimmering just-before-boiling point, the shrimp stirred before draining and icing. If the shells are loose, the shrimp is over-cooked. 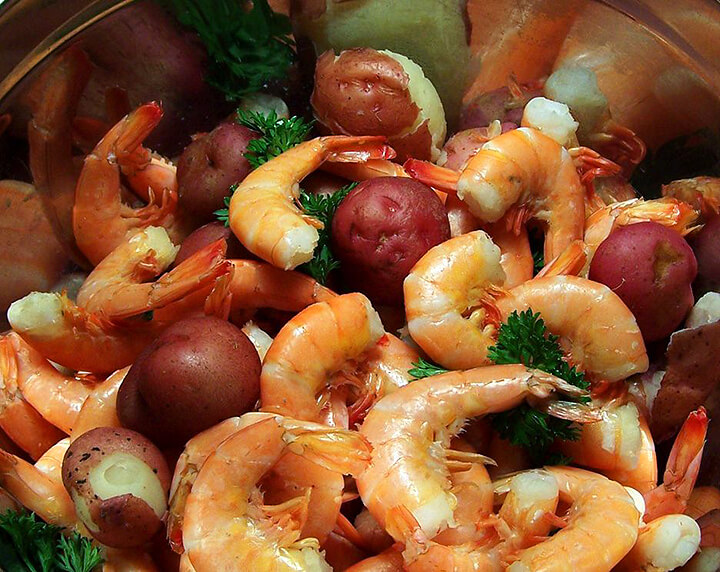 A simple twist on a summer favorite. Mix two packages instant vanilla pudding mix with a cup of milk, refrigerate until partly set. Stir in a can of condensed milk, 8 oz. each of sour cream and whipped topping, 3 ripe (freckled) bananas, sliced or diced, a drained 8 oz. can crushed or chunk pineapple. Layer with vanilla wafers—wafers first, pudding last—and crush a few wafers to sprinkle on top. Some people will sprinkle coconut between the layers and add to the topping. Chill before serving. 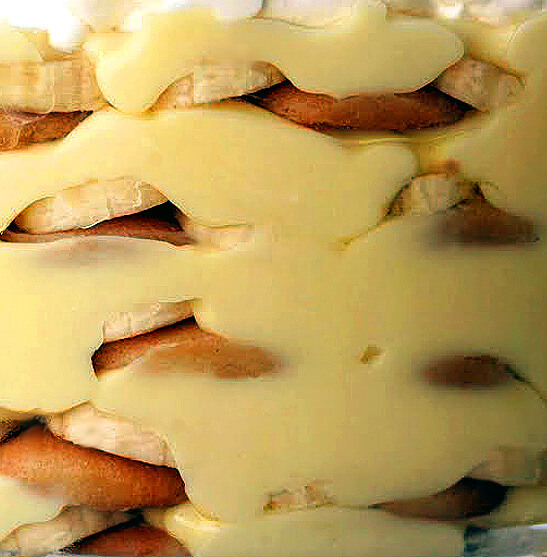 North America has two native grape species, Vitis labrusa, often called the fox or possum grape, and Vitis roundifolia, which most people call a muscadine. While the wild fruit of both species is edible, the fruit of cultivated varieties is vastly superior. Naturally, both species are widely used for making wines, which are most often cloyingly sweet and best used as an aperitif or digestif. The name muscadine comes from its similarity to early settlers with the Muscat grape, a Mediterranean type used in making muscatel, both words deriving from the musky scent of the fruit. 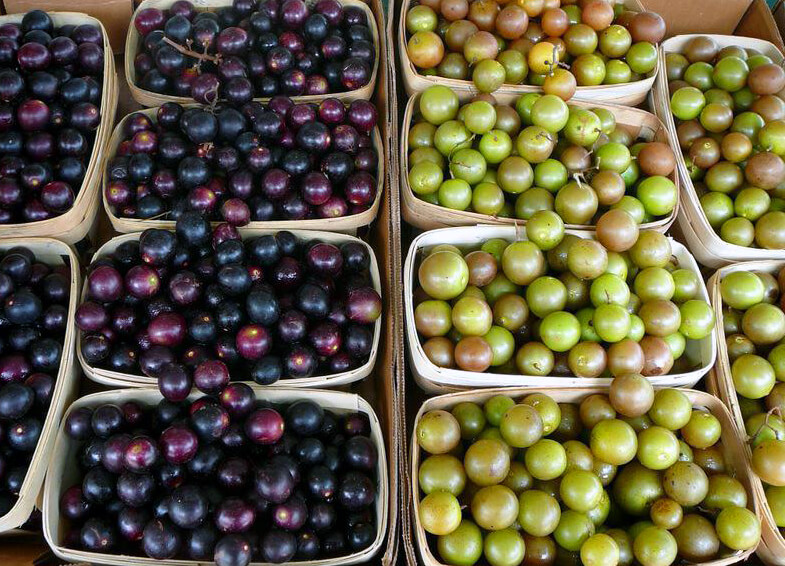 This old New Orleans side dish is different from most pan potato recipes such as hash or fritters, which usually call for waxy potatoes because they hold their shape better than starchy russets. This one, however, does use white/baking potatoes, and the result is a pan full of golden cubes with a crunchy outside and a fluffy inside. The recipe for Brabant potatoes in The Picayune’s Creole Cookbook (1901) doesn’t include garlic, but most contemporary recipes use about a clove, minced or slivered, per potato. Oh, by the way, Brabant is a region in the Low Countries (Belgium, the Netherlands); how this Crescent City side came by the name is unknown . New Orleans is a full of mysteries.

For two servings, scrub and cut into large dice (about a half inch) two russet potatoes. You can peel them if you like. Place potatoes in a colander and rinse until the water runs clear. You want to get rid of the surface starch. Dry thoroughly between paper towels. Heat about a half inch of vegetable oil in a skillet. I don’t recommend olive oil because it has a lower burn, and you want the oil very hot to flash fry the cubes. Stir the potatoes vigorously to ensure that the cubes are a uniform nice light brown. Then drain the oil, add about three tablespoons butter and two finely diced cloves of garlic. Reduce heat to simmer until garlic is fragrant and potatoes are coated with butter. Chopped parsley and/or green onion are traditional toppings. 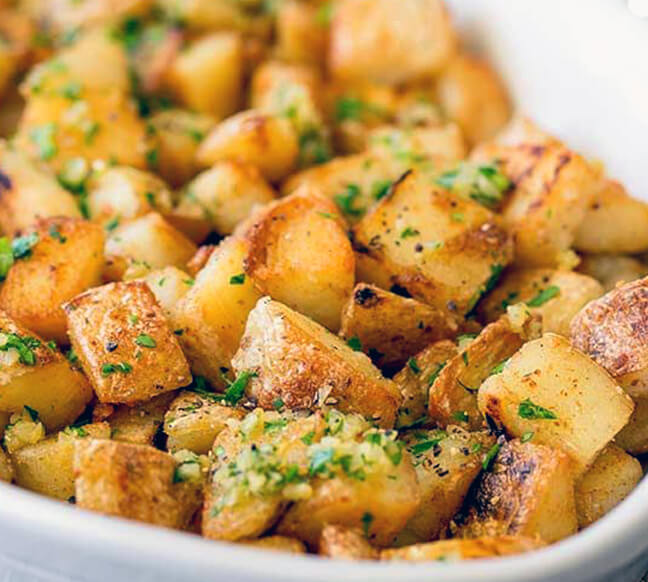 Most recipes for this old buffet dish involve pepperoncini, though there’s no reason not to use pickled cherry peppers, banana peppers or another pickled vegetable such as okra or green tomatoes, but not cucumbers. I mean, think about it.

Marinate a lean cut of beef in the pickling solution or vinegar and water (2:1) overnight or longer if you like, place meat in a covered baking dish with the pickled vegetables, plenty of garlic, freshly-ground black pepper and enough water to cover half the meat; you shouldn’t have to add any salt to this at all. Cook in a slow oven (300) until the beef is quite tender, chop or shred, add reduced liquid and serve warm or cold with hard rolls, a mild horseradish sauce and/or a good mustard of your choice. It should go without saying that this is one of those dishes that’s better the next day, but I’ll mention it. 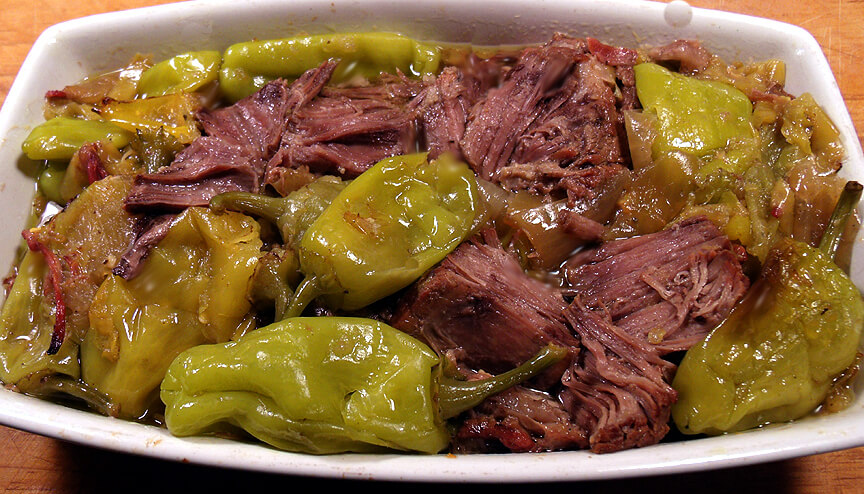 Later in the season, when the cucumbers, okra, and tomatoes have almost petered out, you can put up those special pickles for the holiday table, but peak summer vegetables make great quick pickles to have with your fresh vegetables. Do not–I repeat NOT–attempt this with vegetables you’ll find in a supermarket. The vegetables should be young and very firm. Slice or cube cucumbers, small okra, green tomatoes or squash. For every two cups of vegetables, add about a half cup of finely sliced white or yellow onion (red will bleed). Pack into a quart jar. In a bowl, mix a cup of water, about a third a cup of vinegar (apple cider, white, and rice wine are all good), 2 tablespoons sugar (optional), and 1 to 2 teaspoons salt and stir until dissolved. You can include a clove or so of slivered garlic, if you please. Let these sit for at least three hours before serving, overnight is better. They will keep in the refrigerator for a week, but they rarely last that long. 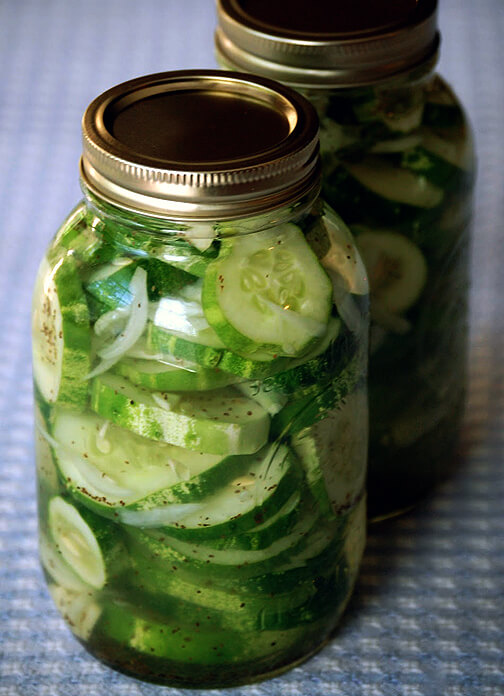 Making quick breads is such a basic culinary skill that at one time those persistent legions of people who spend their time minding other people’s business sniffed their disapproval of a newly-wed husband’s wife by saying, “He married a woman who can’t even make biscuits.” Those were more genteel times. Nowadays, of course, those same people would just say he hooked up with a tramp and be done with it.

Like many short bread recipes, the one for biscuits is more technique than ingredients. Getting the biscuits to rise well is the key, and if you don’t follow a reasonable procedure, you’re going to end up throwing away a pan of hockey pucks. Your ingredients work best if chilled. Biscuits shouldn’t be worked a lot; excess kneading makes the dough so dense that it won’t rise. Biscuits should also be cut out quickly while the dough is cool, and with a clean, sharp edge that will not pinch. Crowding the biscuits a bit also helps them to rise, but if you get them too close together the centers won’t bake through. Also make sure the oven is hot (450/475) before you put them on a rack in the upper third of the oven. So for all you floozies out there who need a bonus the morning after, here’s how to make biscuits. And if you don’t carry a skillet with you, well, you’re on your own.

Take two cups of self-rising flour (I use Martha White) and sift in dry a scant teaspoon of baking soda; activated by the buttermilk, this helps the rise. Work thoroughly into this about 1/3 a cup of cold vegetable shortening or butter. Mix with the fingers until it has an almost granular texture. Then, working quickly, stir in enough cold buttermilk to make a sticky dough, about 3/4 cup. Throw this dough out on a generously-floured surface, sprinkle with a scant more flour and knead a couple of times, enough to coat the dough with flour. Then roll out the dough very thick, about a half-inch, and cut into rounds. You can make them as big or small as you like, just be sure to cut them with a sharp edge: a Mason jar just won’t work. Again, work quickly so that the dough doesn’t get warm. Place biscuits just touching in a lightly greased skillet and pop them into a hot oven for about a quarter an hour. You want them golden-brown and fragrant; brush lightly with butter while hot right before serving. 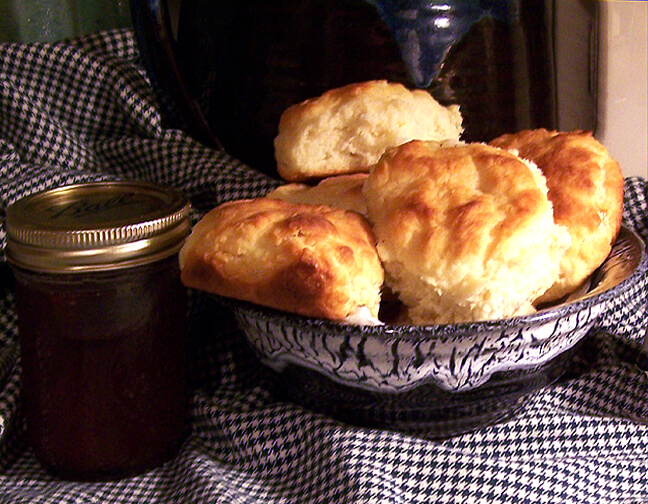 Peel two large eggplants and cut into thick slices. Brush these liberally with olive oil—you don’t have to use EVO, people, any good olive oil will do—and grill or broil until slightly blistered and soft. Dice and reserve. Sauté a small yellow onion with a mild thin-walled pepper such as a sweet banana or poblano—you want about a cup of each, coarsely chopped—with chopped garlic. Add eggplant with a cup of diced tomatoes, a chopped roasted red pepper (about a half cup). Season to taste with salt then flavor with freshly-dried basil, dried thyme, and crushed red peppers, Bake at about 300 until bubbling. Cool and serve with flat bread. 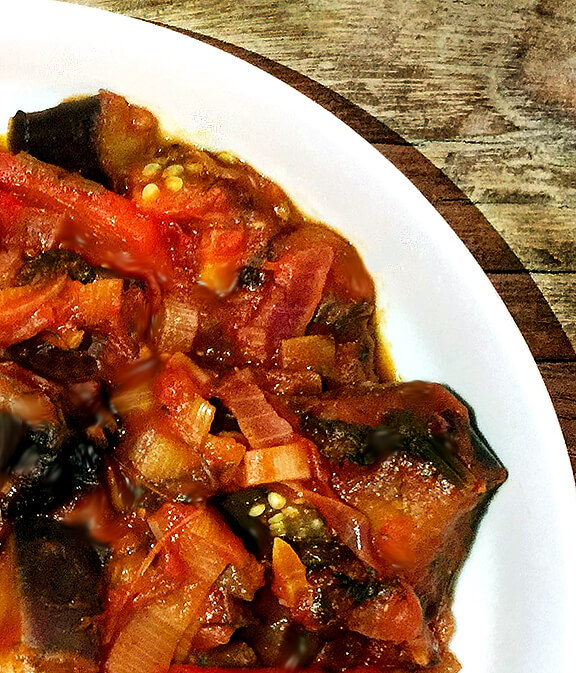 For four cups of fruit make two cups of simple syrup and flavor with a teaspoon vanilla; nutmeg is also a nice touch. Stew the fruit in the syrup just enough to flavor, and while hot transfer to a deep baking dish. Make biscuit dough using sweet milk and sugar, knead lightly and roll out to about half an inch, cut into strips, drop by pieces into the hot fruit/syrup mixture, and bake in hot (350-400) oven. Spoon syrup over the dough as it cools. If don’t serve this a scoop of vanilla ice cream the devil will drag you to hell by your short hairs. 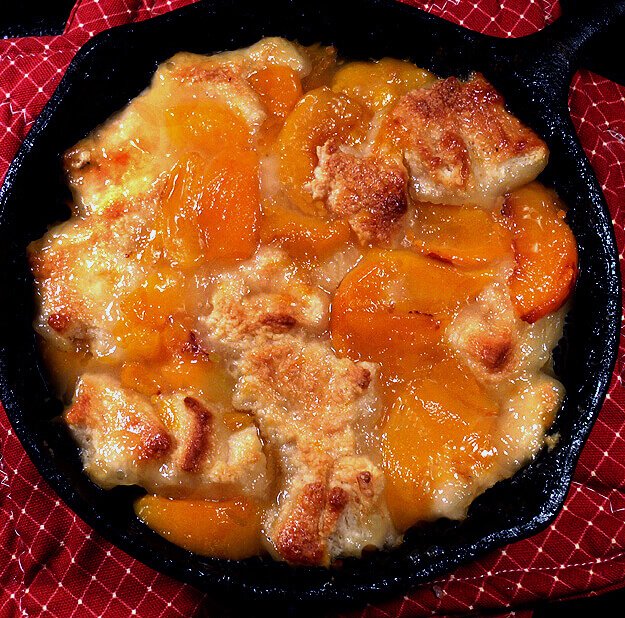 These are so easy and so much fun. Make a simple syrup by adding two cups sugar to two cups boiling water. Cool and add  two packets of your choice of Kool-Aid. Chill before drizzling over crushed ice. 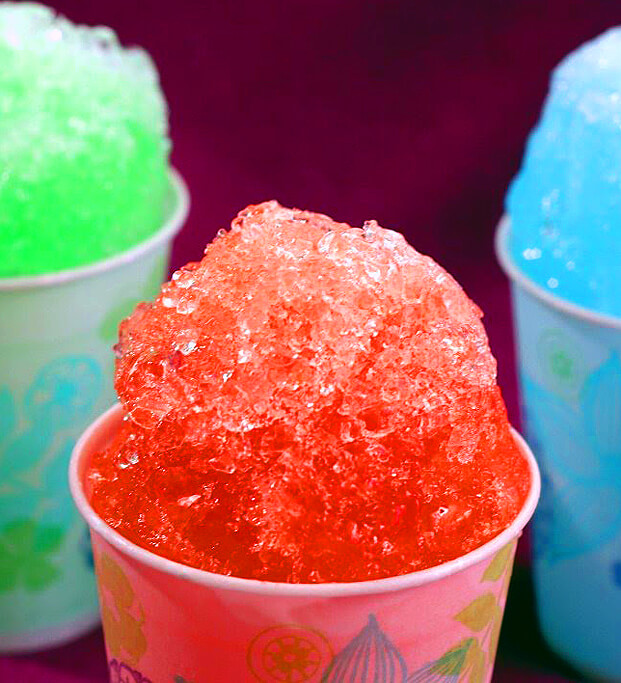