My friend Michelle Hudson, who volunteers at the St. Luke’s Thrift Shop, always has an eye out for community cookbooks or ones decidedly offbeat such as the eggplant cookbook in the shape of an eggplant she once found. Several weeks ago, she ran upon a Christmas Sampler from the girls of Ladies’ Night Out at the First Baptist Church of Florence, Mississippi and therein I found a recipe for compromise cake, not just any old compromise cake, mind you, but “The Compromise Cake”.

The recipe just stopped me in my tracks; just what kind of compromise does this cake represent? Given the zeitgeist I suspected some sort of quasi-political origin such as a traditional dessert for such a Southern political event as a barbecue or a fish fry, but when I passed the recipe around on social media for clues, a friend, upon seeing the applesauce ingredient, pointed out that apple cakes were traditionally served at hillbilly weddings back in the day, so maybe the compromise is between the groom cake and the bride cake.

That’s how I learned about apple stack cakes, which mountain housewives made from apples they’d dry for the winter. Pieces of apples were threaded onto strings and hung in the rafters or in a special outbuilding that had a small kiln inside for drying fruit and other foods. Dried apples are sweet, pliant and flavorful and were cooked with water and molasses into a thick, fragrant sauce. The layers were made with sorghum, dried apples and a little flour, thin and crisp, really more like a big cookie than a cake, and applesauce was spread between the layers. Stack cakes usually had at least five layers and most people believed there must be an odd number. Stories were told about poor mountain brides who could not afford a wedding cake and were gifted with stack-cake layers donated by friends and family members. The layers were allegedly brought to the wedding, stacked on site, and cut on the spot. Purportedly the more layers, the more popular the bride.

The catch is that at any height, because of the dryness of the layers, a stack cake must sit for at least two days. Given that time, the moisture from the apples–and more often than not the applesauce between–softens the layers a bit, melding the flavors and making the cake moist and delectable. Cutting into a stack cake as soon as it is assembled is a disservice to the cake and the cook. So, the wedding theory is a charming story, but a freshly stacked cake is no gift at all, and if people then were really that poor (and I assure you they were) likely a groom’s cake was just not even considered.

So, the mystery remains, and I offer the recipe as a hopeful aside, an incidental, a footnote, not to past matrimonials, but to present reconciliations.

People just don’t make ham salad like they used to.

At one time, you’d see it on just about any occasional buffet table, be it wedding, anniversary or funeral, but nowadays it’s all pimento cheese and hummus. Maybe it’s that same room-temperature mayonnaise consideration that keep tuna or chicken salad at bay, or simply a drift away from meat.

Still and all, ham salad is a beautiful option when you have holiday ham left over. It’s a good nosh whenever. Three ingredients are essential: a binding agent—it doesn’t have to be mayo; cream cheese will do, too—finely diced or pureed lean ham—you can throw a rind or two in the processor for succulence—and pickle, usually pickle relish, but that’s not engraved in stone.

I like a fine consistency with horseradish, mustard and a little grated onion, but “Joy” says of ham salad, “Let this be a matter of inspiration”. So it should be. 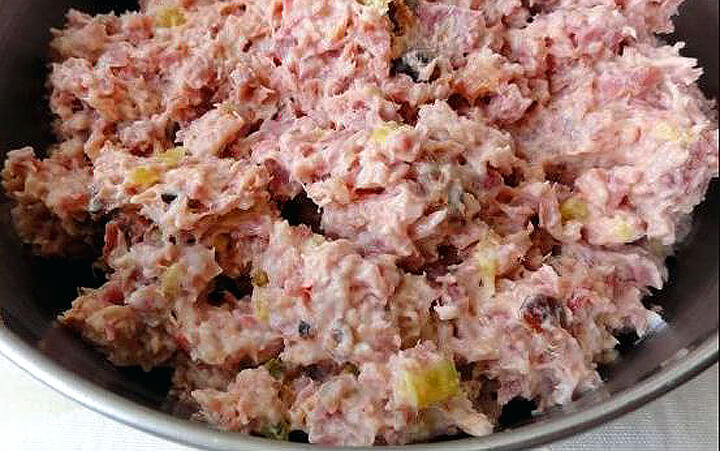 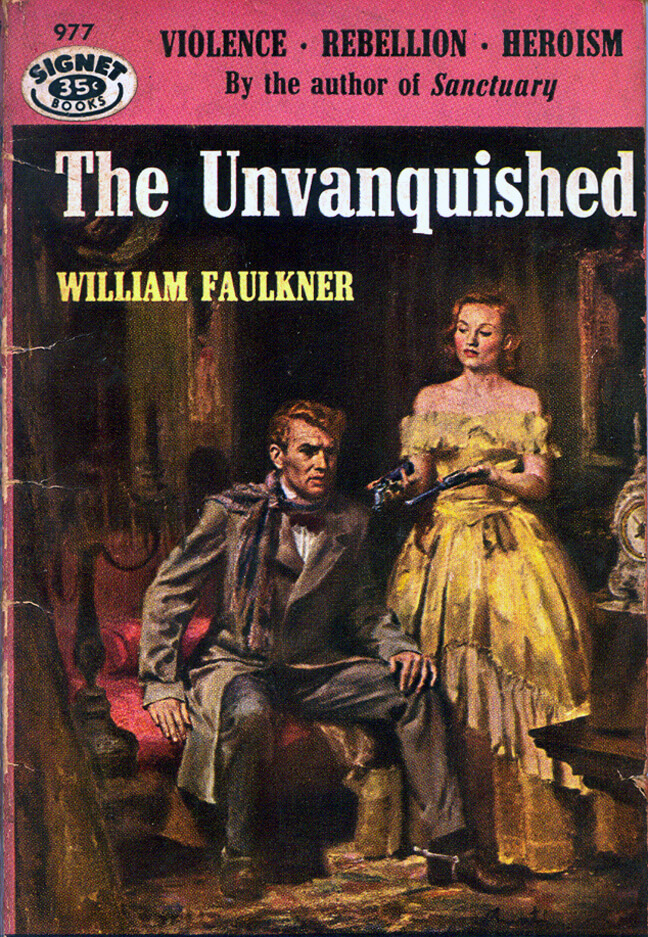 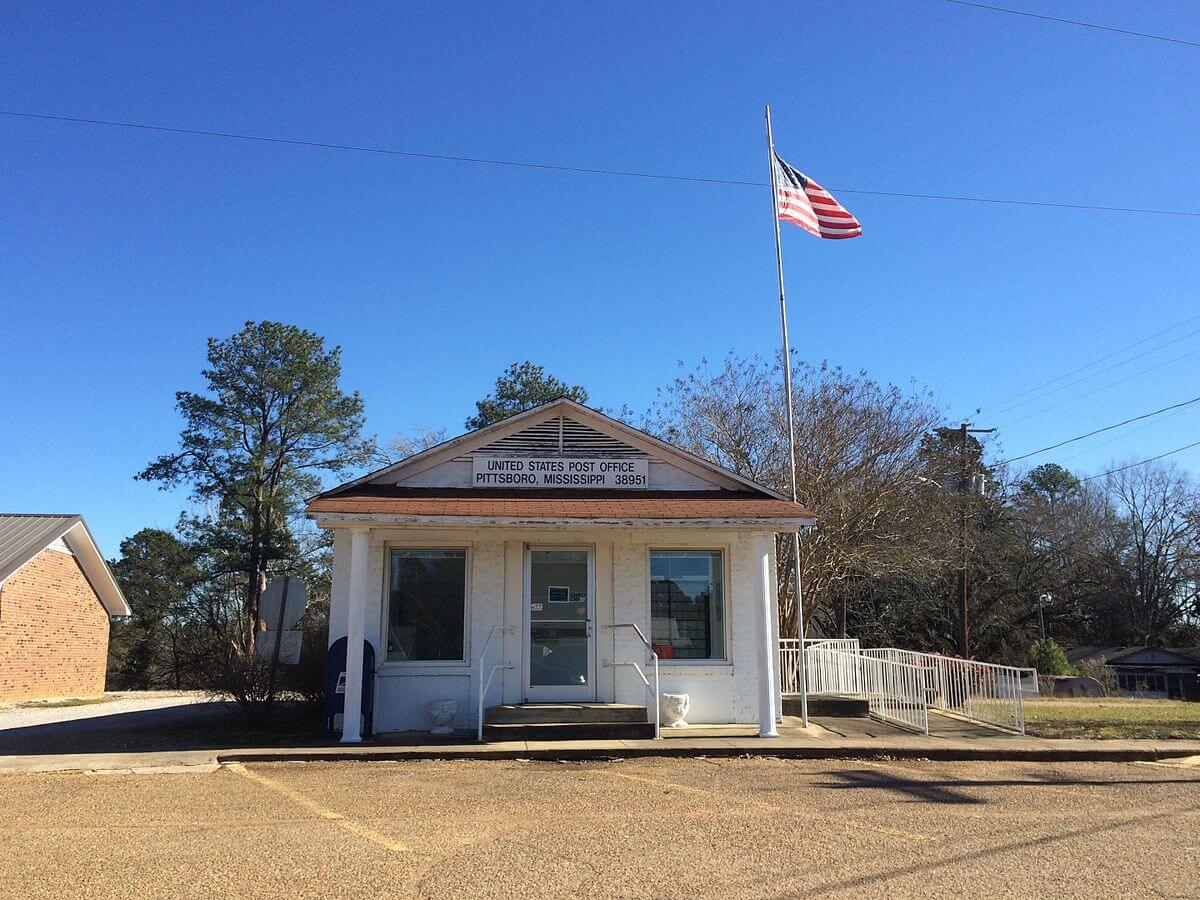 What we call pea soup is invariably split pea soup, made with dried, peeled peas split along the natural division in the seed’s cotyledon. This dish has been around for a long, long time and recipes for pea soup are found around the globe.

Peas (Pisum sativum) are typically yellow or green and played a pivotal role in the science of genetics in the research of Gregor Mendel. Yellow peas were unknown to me as a child, so it came as something of a surprise to me to discover that yellow is the genetically dominant color. Yellow split peas are used in Caribbean cuisines to prepare what is called dhal, which is virtually similar to the dhal or daal of the Indian subcontinent, but the vegetable used there is more often the pigeon pea (Cajanus cajan). Yellow pea soup is also a traditional Canadian dish, predictably prepared as in Europe with salt pork.

This soup is along the lines of dhal, though not vegetarian since chicken stock is used. The split peas were cooked into a mush in a slow cooker—two cups dried split peas will give you a little over a quart cooked—combined with the other ingredients then placed on a low heat on a back eye to meld. As to the curry, as I’ve said earlier, I am not a curry sophisticate and used the McCormick’s blend from the supermarket along with salt and a little cayenne for kick. 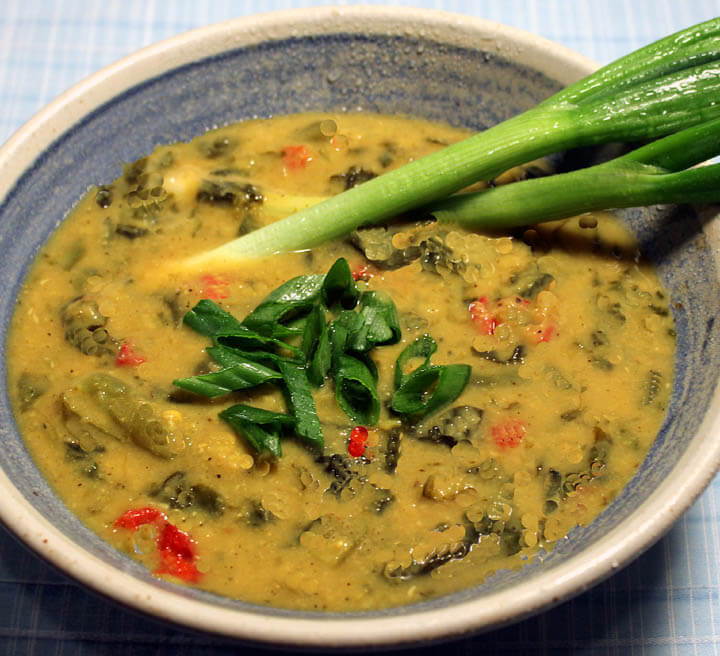 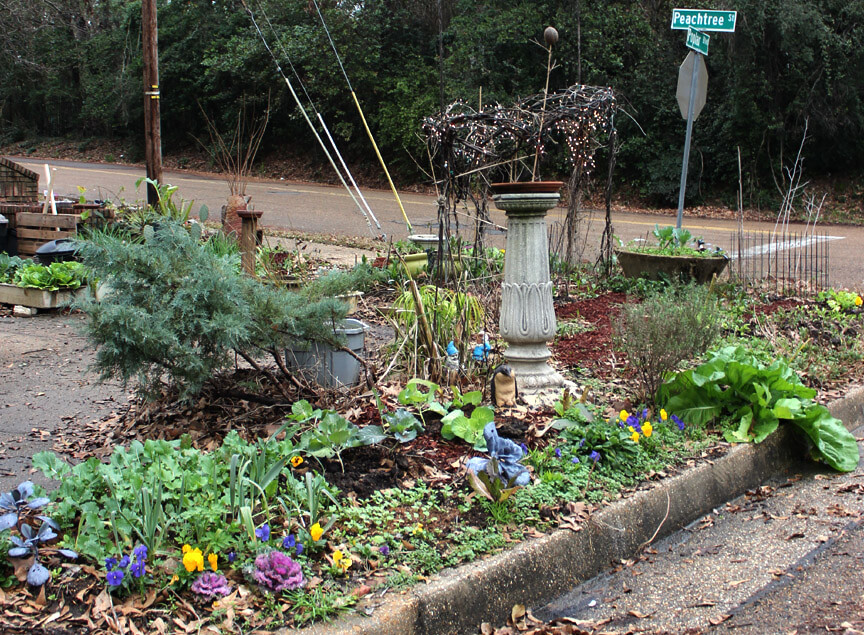 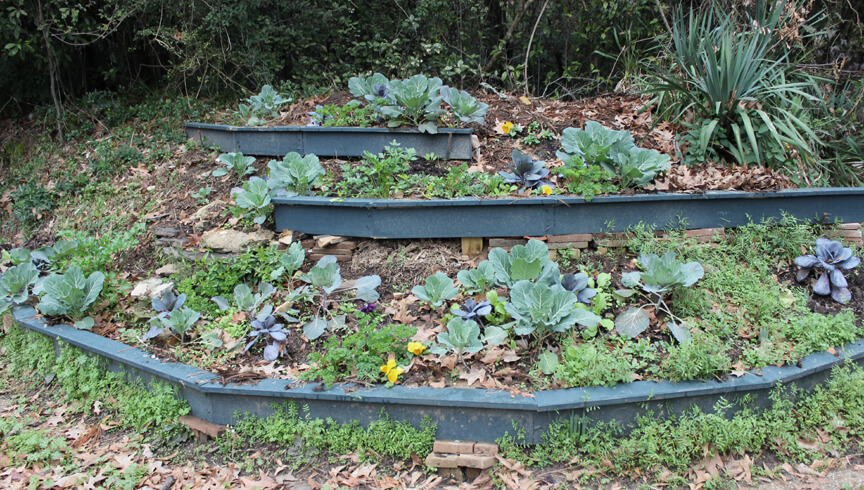 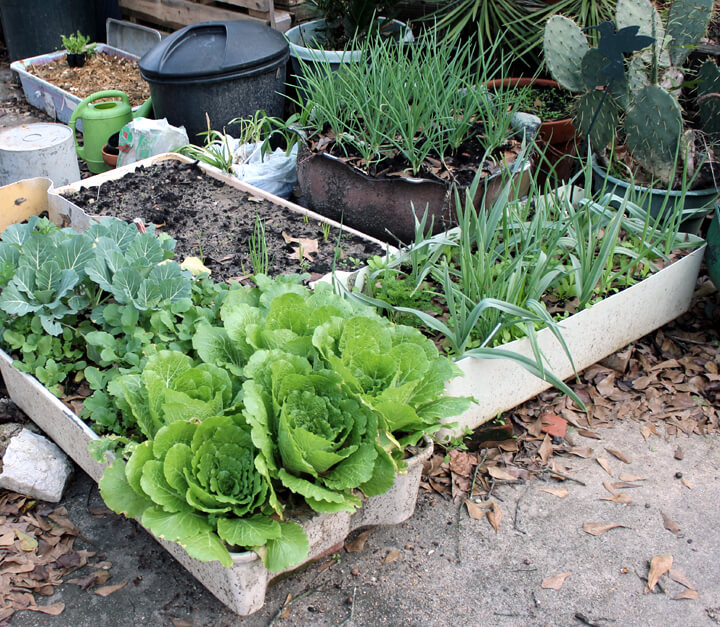 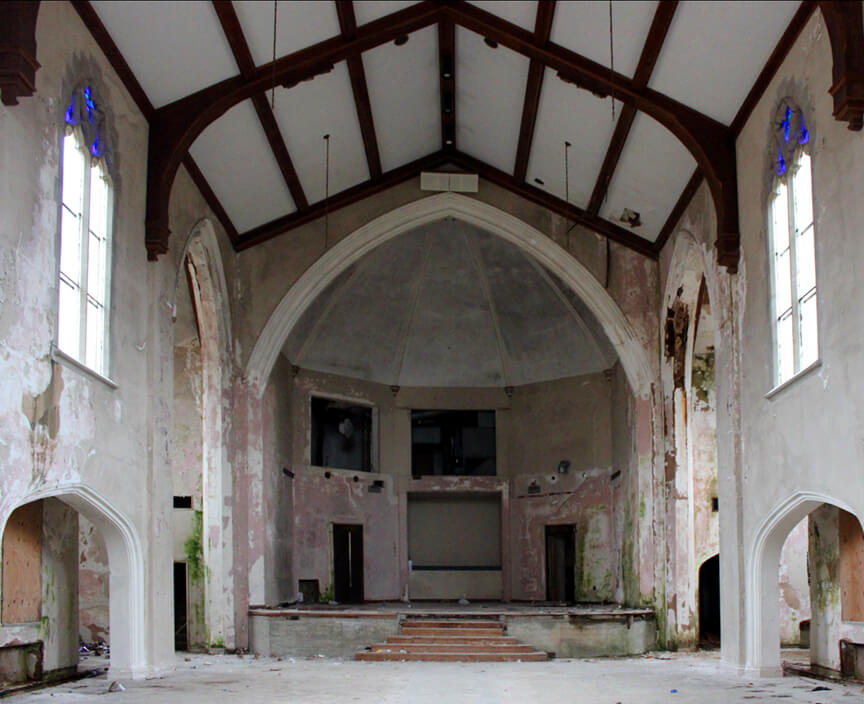 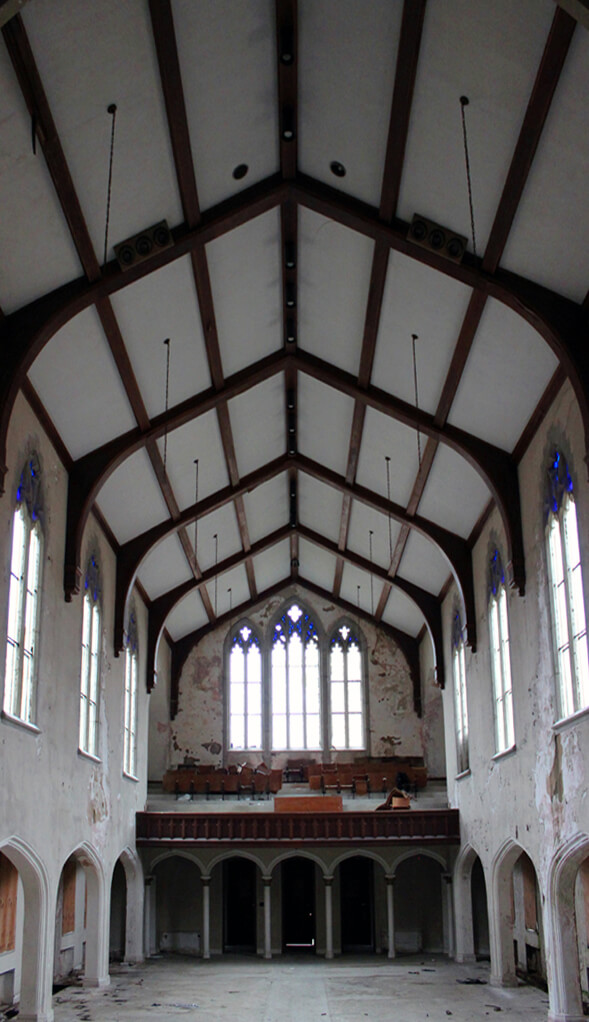 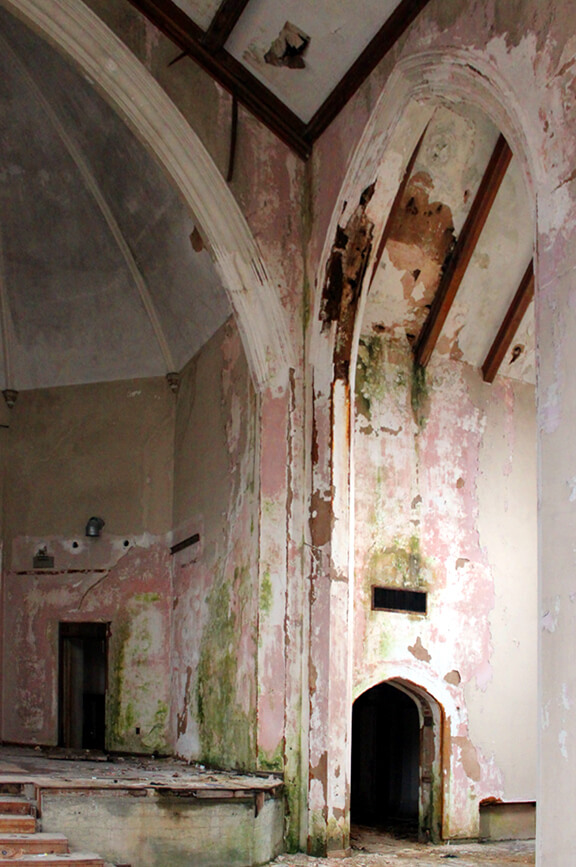 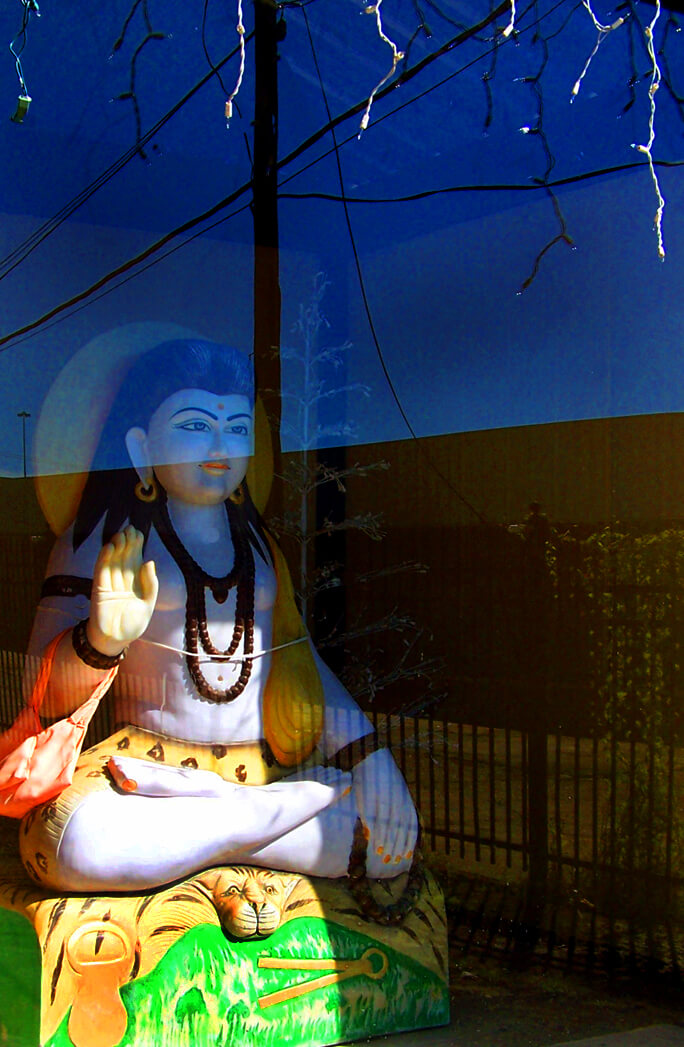