This beautiful mushroom, also known as a lion’s mane, bearded tooth or hedgehog, grows on the trunks of living deciduous trees (in this case an oak) as well as decayed limbs, fallen logs and branches. The fungus has extraordinary medicinal properties for supporting the nervous system. While I can’t speak for their attributes as a brain food, they’re quite good sliced, sauteed in butter with garlic and served with a stout green vegetable such as broccoli or asparagus. They mature in November. 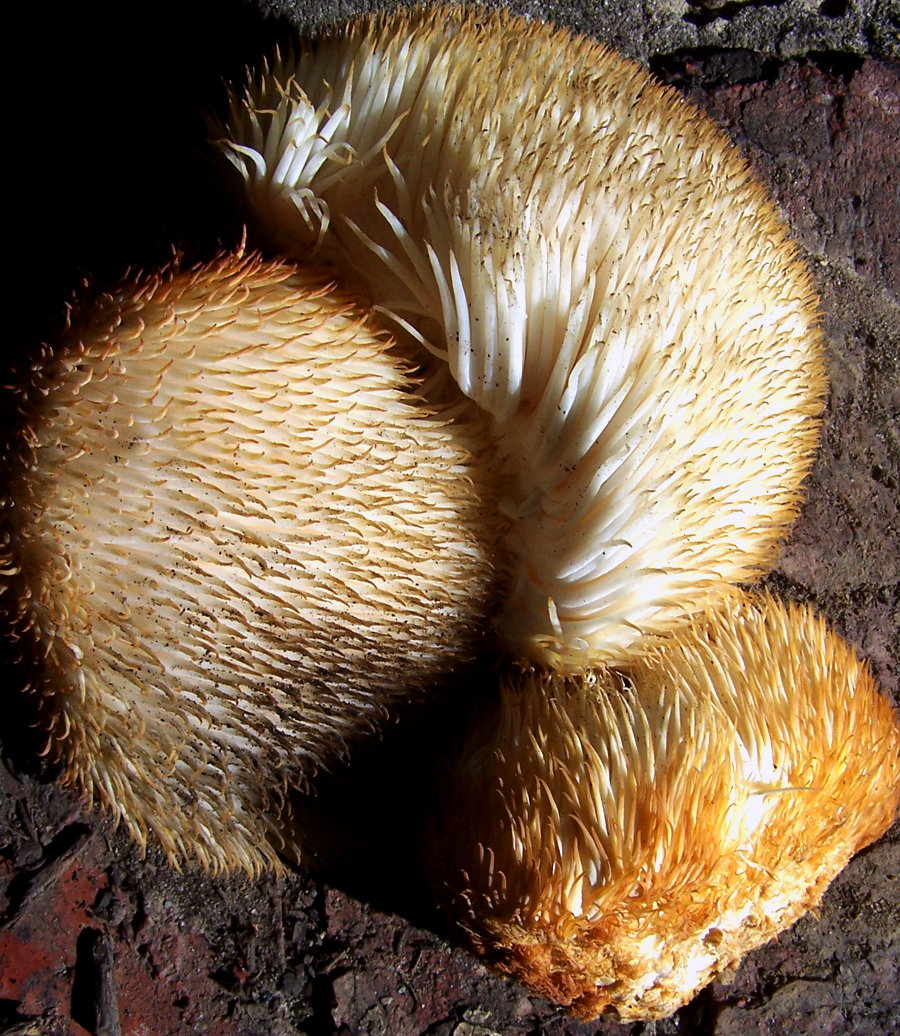 Food historians agree that deep-fried turkeys trace their roots to bayou Louisiana/Texas cuisine although no exact year, restaurant, or person is connected to this particular food by primary documentation.

There is no mention of fried turkey in Lafcadio Hearn’s La Cuisine Creole: A Collection of Culinary Recipes [New Orleans: 1885] or The Picayune Creole Cook Book, 2nd edition [New Orleans: 1901], but according to tradition fried turkeys were cooked outdoors for large popular events (family reunions, charity dinners, church suppers, etc.) in the early years of the twentieth century. About twenty years ago fried turkeys received national press and caught the attention of mainstream America. This recipe migrated from Louisiana/Texas to Missouri, Tennessee, Georgia (peanut oil), then up the eastern seaboard to D.C. before it took a drastic turn northwesterly to Seattle and Vancouver. Most articles written in the last couple of years simply reference fried turkey as a tasty alternative to the traditional holiday roast, usually with some sort of vague warning frying anything that size inside the home.

“Fried turkey has been all the rage at least for the last decade in New Orleans, and long before that it was a tradition in the bayou and throughout the South. Like many a vainglorious culinary mania before it, the national renown of fried turkeys can be traced directly to Martha Stewart, who plucked them from regional obscurity and put them in her magazine in 1996. “—It’s Treacherous, But Oh So Tasty; Fried-Turkey Fans Take the Risk, Annie Gowen, Washington Post, November 22, 2001 (p. B1)

“Frying whole turkeys is sort of the Southern version of making fondue. You have a lot of your friends over, you poke around in a pot of hot oil with some sticks, and then you pull out your dinner. Justin Wilson, he of Cajun fame, recalls first seeing a turkey fry in Louisiana in the 1930s.”—Something Different: Deep-Fried Turkey, Beverly Bundy, St. Louis Dispatch, November 24, 1997 (Food p. 4)

“A longtime food favorite in the southern United States, the delicious deep-fried turkey has quickly grown in popularity thanks to celebrity chefs such as Martha Stewart and Emeril Lagasse. While some people rave about this tasty creation, Underwriters Laboratories Inc.’s (UL) safety experts are concerned that backyard chefs may be sacrificing safety for good taste. “We’re worried by the increasing reports of fires related with turkey fryer use,” says John Drengenberg, UL consumer affairs manager. “Based on our test findings, the fryers used to produce those great-tasting birds are not worth the risks. And, as a result of these tests, UL has decided not to certify any turkey fryers with our trusted UL Mark.”—Deep-Frying That Turkey Could Land You in Hot Water; UL Warns Against Turkey Fryer Use, PR Newswire, June 27, 2002 Thanksgiving has a uniquely American song, not the sort that Lincoln might have imagined when he inaugurated the holiday in 1863, but “Alice’s Restaurant Massacree” is revolutionary, irreverent and earthy; in short, as American as pumpkin pie. 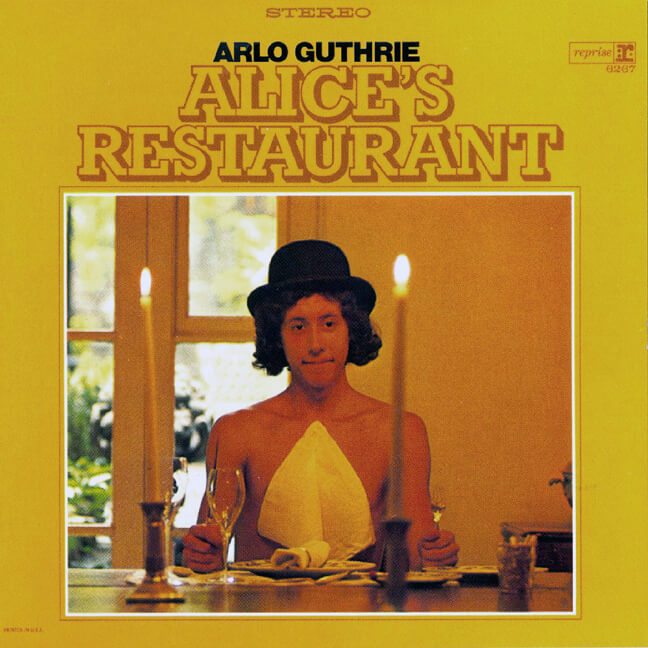 I think a lot of people who are interested in food fantasize about having a restaurant,” Alice Brock writes in My Life As a Restaurant (1975). “I never did. I was twenty-five, married and crazy. I was a captive in a situation I had very little control over other than the role of cook and nag—being a hippy housewife was not satisfying. I had a world of fantasies; none included a restaurant, but all were based on the assumption that I would be my own person, on my own trip.”

Alice’s mother, who was a real estate broker in Stockbridge and determined to get her daughter out of her “situation”, called her one day and asked her to go with her and look at a little luncheonette for sale down an alley in the middle of town. “It had a counter down one side and three or four booths on the other side, and a tiny ill-equipped kitchen in the back,” Alice remembers. “It was painted two-tone institutional green, and it was definitely not the kind of place where I would eat, much less own. But it was a chance, a chance to escape. Before we left, I was hooked. I was already creating a menu, I was already free. Those moments, when suddenly an opportunity appears, a door opens—they are what life is all about.”

Alice called her restaurant “The Back Room”. “I knew nothing, absolutely nothing,” she admits. “I can’t believe how innocent I was. But it didn’t matter.” Opening night was a near-disaster, “a nightmare”, but she persevered, and soon she and her sister, who was also in a “situation”, were staying up all night cooking things she later wouldn’t consider for hundred-dollar-a-plate dinners and working five hours making thirty portions of some exotic soup that would vanish in twenty minutes the next day. “I was crazy, she said, “but I know that for all our unprofessionalism, we cooked some pretty wonderful dishes, and I established a reputation as a cook.”

The summer of 1966 was a magical time for Stockbridge; the Berkshire Playhouse had reorganized with aspirations of something more than just a summer stock theater, attracting stars and would-be stars to the town. “Dustin Hoffman and Gene Hackman liked hamburgers with onion, green peppers, and an egg in them,” Alice writes. “Frank Langella was called ‘Mr. Mushroom Omelet’. Ann Bancroft was wonderful, and when her whole family came, I cooked giant meals; when they stayed late, she helped me clear the table.”

One spring morning a year after opening, Alice says that she walked through the front door and freaked out. “I felt that instead of owning it, it owned me. The plates were out to get me, the pots were planning an attack, the stove was laughing at me. I had a terrible urge to smash everything.” Instead, she called Eastern Airlines and booked a midnight flight to Puerto Rico, emptied the cash box and gave away all the food. “It was a wonderful restaurant. It was a success. I ran it for one year. It turned me into a madwoman. I made enemies of old friends. I broke up with my husband. I left my home. I had actually broken free and become my own person. I didn’t know what I was going to do, but I knew I would never have another restaurant. Never say never.”

Alice Brock went on to open not one but several more restaurants; she now lives in Provincetown, Massachusetts, where she owns an art gallery. After Arlo premiered “Alice’s Restaurant Massacree” before a captivated crowd of over ten thousand at the Newport Jazz Festival in July, 1967, he performed it live on non-commercial New York City radio station WBAI one night later that summer. The song became so popular that for months afterward WBAI rebroadcast it only when listeners pledged to donate a large amount of money. The eponymous (less the massacree) album was released that same year, with the song (at 18:20) taking up the entire first side, the other filled with a selection of bluesy folk tunes. The ballad has become a Thanksgiving tradition not only for classic rock stations, but for thousands of households across the nation.