One of the most iconic television commercials of my generation featured a cable car climbing up a hill in San Francisco while in the background, voices sang:

(You can see a 1962 version, probably the one I first saw, here: https://www.youtube.com/watch?v=yzOR_Fal_SY)

What we know as Rice-a-Roni had its origins in a produce store established by Italian-born immigrant Domenico (“Charlie”) DeDomenico who moved to California in 1895. His wife Maria was from Salerno, Italy where her family owned a pasta factory, and in 1912, she persuaded him to set up a similar business in the Mission District of San Francisco. The business, Gragnano Products, Inc., delivered pasta to Italian stores and restaurants. DeDomenico’s sons, Paskey, Vince (1915–2007), Tom, and Anthony, worked with him.

In 1934, Paskey changed the name to Golden Grain Macaroni Company. Tom’s wife, Lois, was inspired by the pilaf recipe she received from Armenian immigrant Mrs. Pailadzo Captanian, to create a dish of rice and macaroni, which she served at a family dinner. In 1958, Vince invented Rice-A-Roni by adding a dry chicken soup mix to rice and macaroni.

In 1958, Vince DeDomenico decided to take this recipe and produce it for sale in grocery stores. He placed the rice and pasta in a box, and added a dry seasoning mix in place of the liquid chicken broth. Because this product was made up of half rice and half pasta, he decided to call it Rice-a-Roni.

“There were not many packaged side dishes in the market in 1955,” said Dennis DeDomenico, Tom and Lois’ son. “Everything was being geared toward less time in the kitchen. Major appliances like dishwashers and garbage disposals were starting to come in. The convenience factor was everything.” All that was missing was a name.

“We said, ‘Well, what is the product? The product is rice and macaroni. Why don’t we call it Rice-A-Roni?’ Didn’t quite sound right. Who’d ever heard of rice and macaroni being together? Still, the name had a ring to it,” Chicken Rice-a-Roni was first introduced in the Northwestern states in 1958. With it came the first Rice-a-Roni commercial, featuring San Francisco’s Cable Cars and the now famous jingle. In 1986, Quaker Oats Company purchased the Golden Grain Company from the DeDomenico family, and in 2001, the Quaker Oats Company was purchased by PepsiCo.

Rice-a-Roni is nothing if not versatile, and through the decades dozens of dishes have been created using the product, including this one for all you Forty-Niners fans. 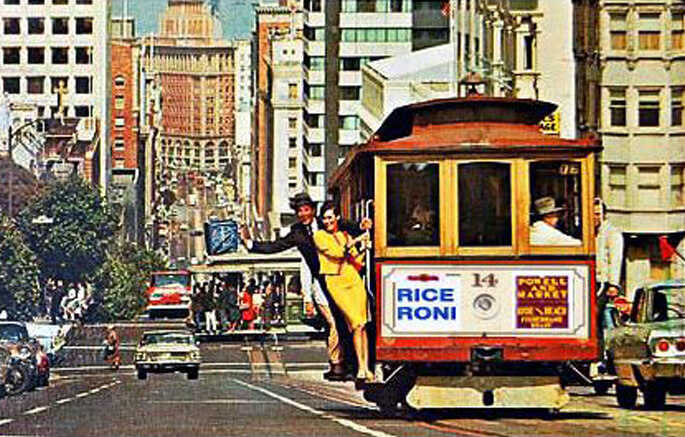