My maternal grandfather and my father were both GIs, and they both served in the Pacific, where a staple ration for the troops was Hormel’s Spam. SPAM is an acronym for “spiced ham”, but it soon became known as “Special Army Meat” by soldiers. The meat product, consisting of pork with ham, salt, water, potato starch, salt, and sodium nitrate, doesn’t require refrigeration, has a long shelf life, and is arguably toothsome. Between 1941 and 1945, Hormel shipped over fifteen million cans every week, over all in excess of one hundred million pounds of Spam overseas between 1941 and 1945.

Like so many boomers, I grew up with Spam. We’d have it fried with eggs for breakfast or between two slices of Wonder bread slathered with mayo for lunch, but for very special occasions we would have scalloped potatoes with Spam. While this dish likely just screams of trailer park cuisine to many, I’m certain that millions in my generation who grew up in small towns across the South, likely across the nation, remember Spam in scalloped potatoes as a familiar side on the dinner table and a standard of church potlucks and dinners-on-the-ground.

The bone of contention with scalloped potatoes is whether to add cheese or not. Purists will insist that any scalloped potato recipe with cheese a gratin, when actually a “gratin” is a technique referencing any recipe cooked with a crust, whether it be of cheese, breadcrumbs or some other ingredient, or a container, a gratin dish, which is a shallow oven-proof container. I rarely use cheese myself, opting instead to use a light butter roux, and a mixture of whole milk of milk and heavy cream in a somewhat thin sauce between layers of thinly-sliced starchy potatoes (peeled or unpeeled). This is baked in a medium-high oven (350 or so) until the potatoes are tender and the top somewhat browned. Spam, cubed or sliced (more often cubed), is first lightly fried with just enough oil to toss, and layered in. The Spam itself is quite salty, but you’re going to need to salt the sauce anyway, and I like black pepper. If I use cheese, I’ll use a dry cheese; Romano or Parmesan. Finely diced onions are always an option. 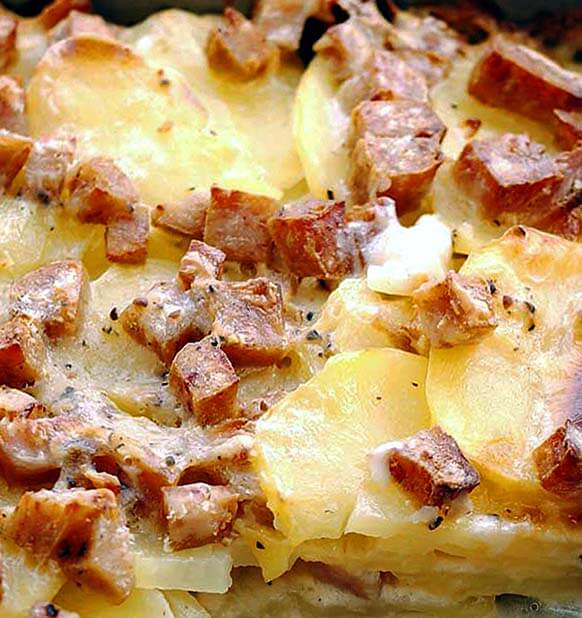 A different version of what most of us know as scalloped potatoes, this simple recipe is also known as a potato cake for obvious reasons. Most recipes will instruct you to peel the potatoes, but I don’t find this necessary, justifying my lassitude by claiming it makes for a prettier presentation. The only trick to preparation is turning the cake to brown both sides. I’m certain that there are people in the world who have the manual dexterity to flip the cake with a flick of the wrist, but a pound of potatoes is a hell of a lot heavier than an omelette, so I’ve yet to master this technique. Instead, I place a lightly oiled plate over the pan, flip it and and slid the potatoes (with exceeding grace and beauty) back into the pan to brown evenly.

Slice small red potatoes very thinly (having a mandolin comes in handy here, and you can find a simple one for a dozen dollars or so) and–working quickly before the potatoes discolor–arrange in layers, sprinkling with salt and pepper, in a small sauté pan with plenty of oil or melted butter. Place in a hot oven—400 or so—until bubbling and lightly browned. Flip (however best you can) to brown evenly. Serve hot with a hard grated cheese and sour cream. Pugnacious people would add rosemary, but I find it annoying. 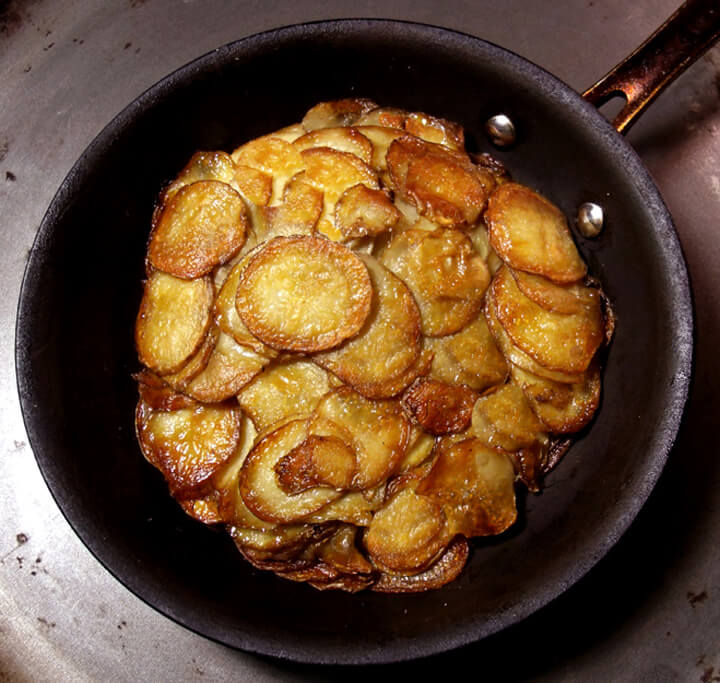