Very soon you’re bound to have a few boiled eggs left over, and here’s a great recipe for those come Monday morning or for a light buffet any time of the day. I always add a tablespoon of Parmesan to the egg mixture.

In a large skillet sauté onion in butter until clear/transparent; stir in flour and cook slowly 3-5 minutes more. Blend in milk and egg yolk until smooth. Add salt and pepper. Cook, stirring constantly, 8-10 minutes longer or until sauce thickens. Remove from heat, add sliced eggs and mix lightly. Spoon into 2 8-oz casseroles and sprinkle with paprika and Parmesan cheese mixed together. Bake at 350 degrees until bubbling. Garnish with eggs slices; serves two. This is a wonderful breakfast or brunch recipe, and can be served in a casserole with toasted French bread slices. 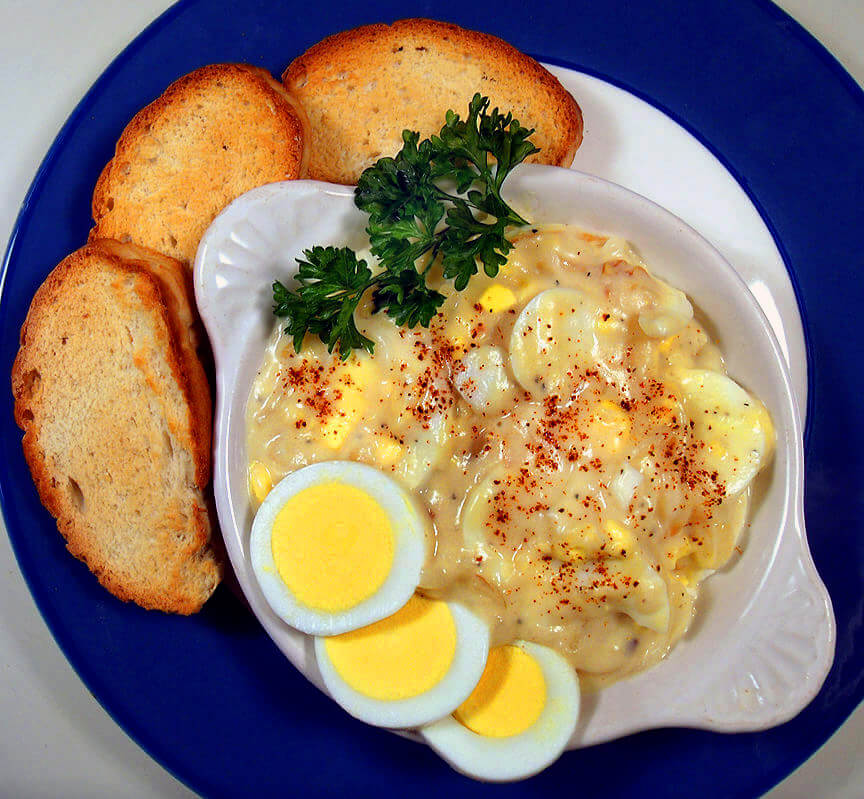 I came to know Harry Ward when we worked together at The Warehouse and Audie Michael’s in Oxford during the 1980s, before the town became the characterless hipster charade of condos and concrete that it is now. Though Harry says the folks in Acadia parish would scoff at his claim to be a Cajun, Harry (who is from “N’awlins”) claims it, and I’ll always consider him the first Cajun I ever met. Harry was the first person I ever heard call a spice sack a “sock”, and he also introduced me to Tony Chachere (not literally, of course). Recently Harry sent me this wonderful Brennan’s recipe, and I learned of his ordeal with Katrina as well. While I’m sure there are thousands of such Katrina stories to be told, Harry’s seems particularly poignant to me, perhaps because it left him so far from the home he loves, or perhaps simply because it happened to my friend.

When Katrina struck, I was living in Bay St. Louis. Over the years, I had renovated my grandparents’ weekender there. The house was built in 1908. After about 3 years of completely renovating the whole house, I moved in in the late 90’s. As the house was only 600 feet from the Gulf of Mexico, I custom-cut plywood for my windows in preparation for hurricanes over the years. The old house was built up on brick piers about 2 feet off the ground, a typical construction at the time, with a wrap-around porch to take advantage of the sea breeze.

As Katrina approached, I knew we would have to evacuate. For the smaller storms, I had just boarded up and rode out the storm. The house had survived Camille, which up until then had been considered “the storm of all storms”, so I knew the house was storm-worthy. My wife and 3-month daughter evacuated to friends near Lafayette, Louisiana as I did not want to go north (to Mississippi or north Louisiana) for fear of Katrina knocking out power as she moved in that direction. After the storm, television coverage of Katrina was mostly of N’awlins as the television crews could not get to the Gulf Coast. We finally saw a fly-over of Bay St. Louis and realized we wouldn’t have anything left. When we made it back to the Coast, we discovered that only the steps remained of my grandparents’ house. The house was 23 feet above sea level. We had a 30 foot storm surge.

We went to Philadelphia, to my wife’s parents’ house, for about 3 weeks. Her brother came to visit there while on business. He was living in Reno, Nevada and suggested that we come out west to Reno as he had a fully-furnished rental. We came in the belief of a temporary stay, but we’ve been here for 10 years. I’m employed with the Nevada Attorney General’s Office. Katrina has been an emotional and financial strain on our family. My wife still has nightmares of water and waves even though we evacuated.

I miss the South, the friendly people that wave to everyone even if they don’t know them, the food, the conversations and the slow pace of life. I miss talking about food or our next meal, even right after finishing one: “What do you want to make with the leftover shrimp or crawfish or crabs?” Like all great Cajun recipes eggs Chartres is about how and what to do with leftovers. Like gumbo; left-over meat or seafood, a roux, and you got your gumbo. Or jambalaya; leftover meat or seafood, mixed w/ rice, and you got your jambalaya. My mom made the eggs Chartres with left-over hard boiled eggs, especially after Easter. Now, this does not mean she would not boil extra eggs at other times, for egg salad, potato salad or even creamed eggs Chartres.

In a large skillet sauté onion in butter until clear/transparent; stir in flour and cook slowly 3-5 minutes more. Blend in milk and egg yolk until smooth. Add salt and pepper. Cook, stirring constantly, 8-10 minutes longer or until sauce thickens. Remove from heat, add sliced eggs and mix lightly. Spoon into 2 8-oz casseroles and sprinkle with paprika and Parmesan cheese mixed together. Bake at 350 degrees until thoroughly headed. Garnish with eggs slices; serves two. This is a wonderful breakfast or brunch recipe, and can be served in a casserole with toasted French bread slices. 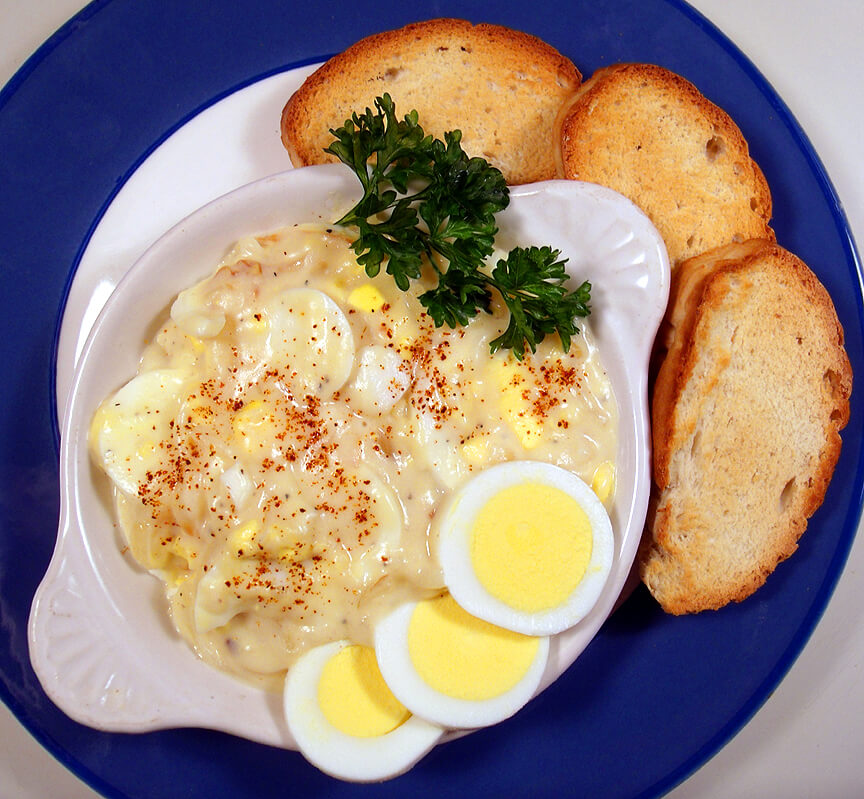