Indianola, Mississippi has the dubious distinction of being the subject of not one but two studies by Northern anthropologists. The more prominent study by John Dollard, Caste and Class in a Southern Town (1937) comprises a psychological perspective on how race relations in the Deep South were shaped by “caste” and class. While in Indianola, Dollard stayed at the boarding house of the formidable Kathleen Claiborne, who, when her guest complained that she was over-cooking her leaf vegetables, set a plate of chopped fresh turnip greens before the anthropologist and sedately walked away. Her son Craig was to recall this years later when he encountered Dollard in the offices of the New York Times. Dollard graciously asked of Mrs. Claiborne, and hearing of her demise, recounted that she was “a great lady”.

The second, lesser-known study was written by the delightfully-named Hortense Powdermaker, who, fresh from work with a “primitive” people, the Lesu of New Ireland in present-day Papua New Guinea, came to Indianola to study the black community. After Freedom (1939) is the first complete ethnography of an African-American community in the United States. Powdermaker’s goal was to use anthropological methods to give insight into American society. She considered race relations to be one of the most pressing social problems of her day—as indeed it was, and continues to be—and she hoped that her work would prove valuable to those in a position to promote change.

Needless to say, those who could affect a change ignored Hortense’s study, After Freedom presents us with a fascinating look at life in the Mississippi Delta during the Depression. Among the more interesting sections is “Lagging Beliefs” in which Powdermaker documents the folk superstitions then prevalent in the black community. The following is a short excerpt.

A large number of the superstitions practiced in the community today to be concerned with love, or connected in some way with the relations between men and women. Others have to do with luck in general, and still others are designed to bring bad luck to an enemy. Many are concerned with physical health. individuals are not really superstitious give a perfunctory observance to certain superstitions, much as a northern white person may knock on wood without really “believing” in the necessity for the gesture. Others take their superstitions more seriously. These for whom superstitions have most meaning go for assistance to the voodoo doctors who dispense advice, charms, and spells. The types and varieties of superstitious beliefs may be suggested by a small sampling:

Wearing a punctured dime around the ankle will keep trouble away.

Stray cats or kittens who wander into a house and stay there bring good luck.

Dreams foretell events. If a dream is told before sunrise, it is bound to come true.

A woman described a very vivid dream in which her dead father came to take away her mother, who was still alive and apparently well. Next day the mother died.

Throwing salt after an enemy brings him bad luck.

The hair of an enemy can be used to bring him disaster. Usually it is concealed under his doorstep or someplace where he will walk over it. An old woman who is a sharecropper believes this firmly that she never allows anyone to comb her hair or use her comb, and always takes great care to destroy her combings, so as “not to take any chances.”

Certain perfumes will “hold” a man by magic as well as by allure. A woman can hold a man by putting something in his food. No information could be obtained about what was put in, and this belief appears less widespread than those concerning “poison.”

“Poison” put into an enemy’s food will work him harm. One woman told how her husband died because an enemy put poison in his whisky. Snake poison is among the worst; a sloughed snake skin, dried and made into a powder, is sprinkled into the enemy’s food while he is not looking. The powder comes to life in his stomach and gives him fits. The tale is told of one man who had such fits, and finally the snake ran right out of his mouth.

The mother of a young boy who had recently died told that for four years he had been subject to fits, during which he would scream, kick, and twist his head “almost clear around.” The mother had a “friend,” and another woman was jealous of her. The jealous one made some “poison” to put into her food, but nobody would take it to her, and the woman could not come to the house herself. One day, however, when her rival’s little boy was playing near her house, she gave him food containing the poison, Immediately the child began to have fits. His mother took him to doctors, to hospitals, to a voodoo doctor, but nobody could cure him. Finally she carried him to an especially famous voodoo doctor, who gave the boy some medicine, which made the poison come out. It emerged in a terrific bowel movement—a long narrow thing, about five inches in length, which had given him the fits by running around in his stomach. At the same time there came out a lot of little things that looked like maggots. Now the child was cured of fits. But immediately after he grew very sick, first with flu and then pneumonia, and soon he died.

The voodoo doctors employ a variety of cures for an even larger variety of ills; they claim to restorc health, to revive fortunes, to unravel mysteries. Often they give a charm in the form of a “hand,” less commonly called a “toby.” A “hand” is usually a small bag, one to two inches square, made of silk or sometimes of cotton, said to be stuffed with spider webs and horse hair worked into a powder, Sometimes very fine bits of glass are added. The bags should never be opened. They are carried in a pocket or worn next to the body, and are to help the wearer in love, business, or some other venture, One of these bags may be used to hold the hair of an enemy when it is placed under his doorstep to give him bad luck.

Instead of the hand, some voodoo doctors give their clients a small piece of paper with writing on it. This is worn next to the skin, and should not be read. Herbs, roots, small bottles filled with oil or other liquids are also given. On one occasion, a woman was given a small sealed bottle to conceal in her bed as a love charm. Later she went to a voodoo doctor for help in repulsing the attentions of a man she did not want. For this he gave her a piece of paper sealed with wax so that she could not read the inscription. She wore it in her stocking, and after that she was able to rid herself of the undesired attentions.

A hand was considered responsible for the incessant quarreling of a couple. One day the wife saw a small black bag under the front steps. Trembling, she dug it up and found it filled with steel needles and spices. She was sure this had been planted by her enemy and had caused the quarreling. She destroyed it at once; the report did not tell whether the quarreling stopped. 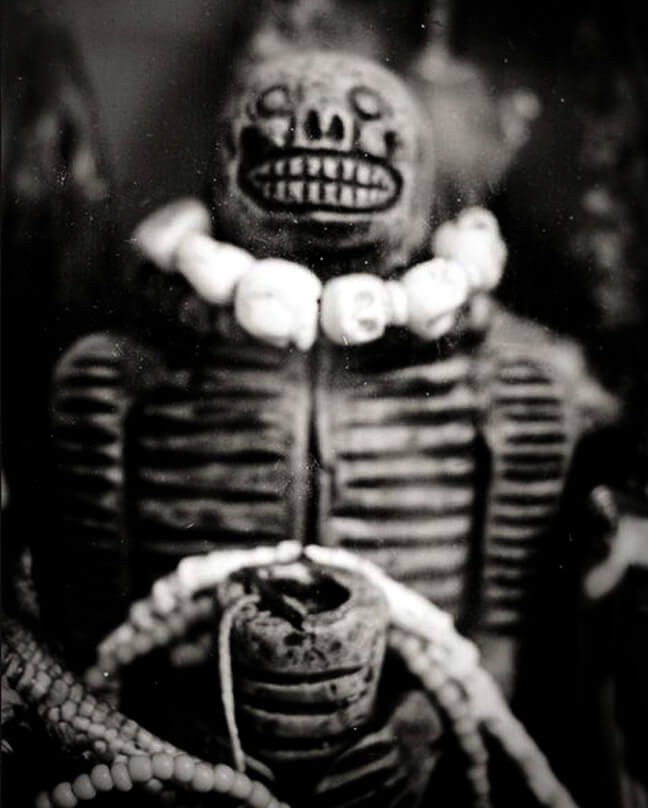