Does Jackson, Mississippi have a distinct culinary reputation?

The short answer is no. Even the city’s adopted signature recipe, comeback salad dressing, has its roots not so much in restaurants here, but in diners across the South for the simple, practical reason that it’s easily made from on-hand ingredients (ketchup, mayonnaise, Worcestershire sauce and pepper) easily stored and versatile.

So as to a distinct culinary presence, no. What we’re left with in Jackson is a cuisine typical of cities throughout the Mid-South, the food of the yeomanry, the people who are the rule rather than the exception, a heavy cuisine developed to sustain people through long days of hard labor, beginning with Herculean breakfasts featuring lard biscuits, grits and rice, eggs and pork followed by meals of meats, starches and vegetables stewed in fats.

These are the foods you’ll find all over Jackson in restaurants and supermarket deli buffets for breakfasts and “meat-and-three’ (more often meat-and-two) lunches, dishes adopted from the home table of past generations, food with a voice in the family and community, a cuisine that sings of place, a menu plundered by time, restored in memory. 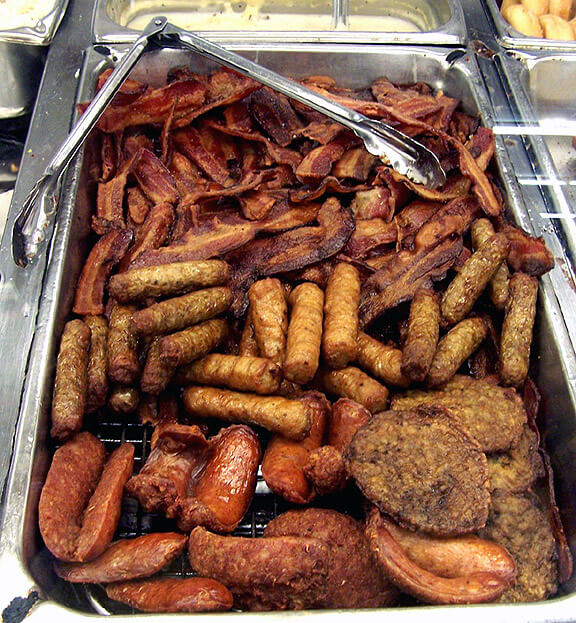 A petite version of the caveman version, these use chicken legs rather than turkey. Toss chicken drums in vegetable oil lightly seasoned with black pepper, paprika, sage and salt. Grill or arrange alternately on a skillet and place in a medium (300) oven for about an hour, turning once to brown evenly. 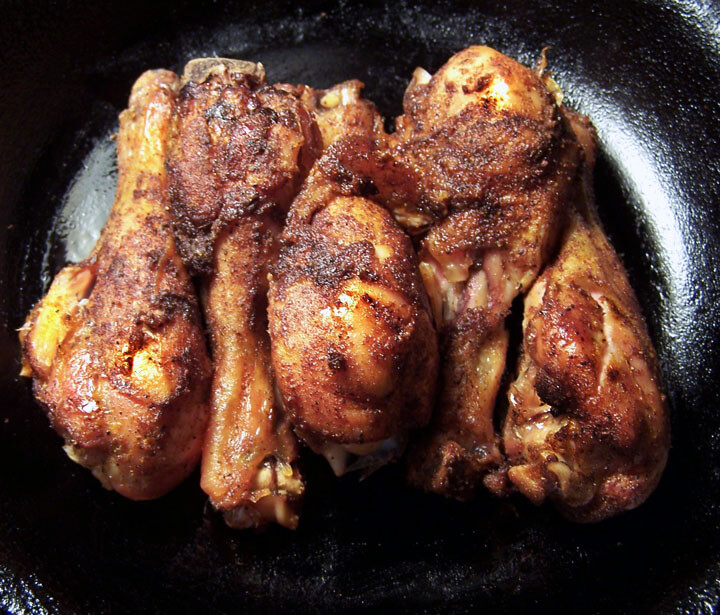 This rich custard makes a sumptuous base for any homemade ice cream, simply add flavorings to taste. Admittedly it is a little time-consuming and takes a bit of patience, but custards were most likely the basis for the rich, unforgettable ice creams your grandmother made on the porch when you were growing up.

Combine 1 cup sugar, 1 tablespoon cornstarch and a scant teaspoon salt in a saucepan. Gradually stir in a quart of half-and-half, stirring constantly and place over low heat. In a large bowl beat together 2 large eggs and a tablespoon of pure vanilla extract until whites and yolks are thoroughly blended. Add this mixture very slowly into the half and half, stirring constantly and gradually increasing heat until thickened. It should have the consistency of eggnog. Stir in a pint of whipping cream and remove from heat. Refrigerate for 45 minutes to cool, then add fruit, nuts and/or flavorings and sugar to taste, place in your ice cream freezer and process according to directions. 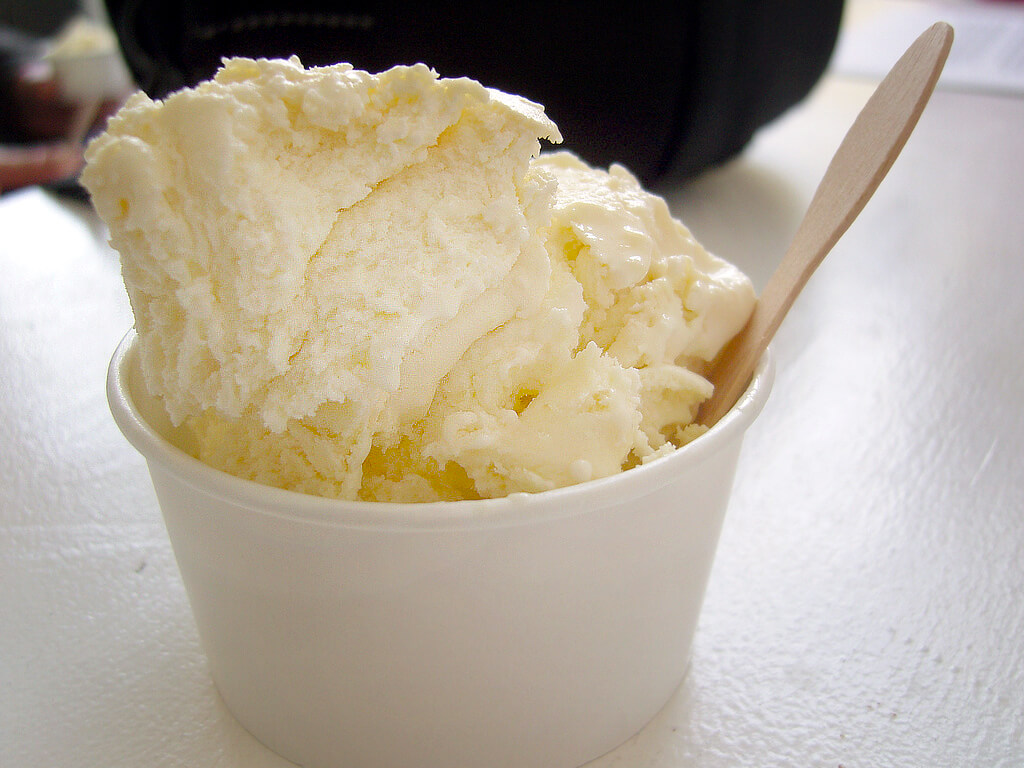 The deli at our local grocery serves such a wonderful vegetable soup that many days I’ll get two large servings—at 12 oz. each, a little less than a quart—and make a lunch of that with saltines and tea. Such was my intent yesterday when I strolled in, found the soup bin empty and was told that the vegetable soup was discontinued for the summer, since “nobody eats soup when the weather is hot.”

Well, you know what? Yes, they do, and not just those prissy vichyssoises splashed across the pages of food magazines in June. We’ve enjoyed fresh vegetable soups for centuries here, and rightly so, since the American South produces the finest vegetables on the face of the planet. (There; I’ve said it, the gauntlet is flung. The ball’s in your court.)

Here’s my recipe, which starts with two quarts diced canned tomatoes and juice. If you’re lucky, you’ll have a talented, industrious gardener who cans, and you will have in your larder their red gold. If not, Contadina is the best. Sauté one large diced white onion with three or four diced ribs of celery and two cloves minced garlic in just enough vegetable oil to coat. To this add two cups water or two cups broth, vegetable broth preferably, but a weak chicken will do—in place of veal, you understand—pour this into your lowly-shimmering, beautiful tomatoes along with a cup or so of frozen diced okra, thawed and drained then find something else industrious or enlightening to do for a half-hour or until the onions and okra have surrendered their integrity to the essence of the mélange.

This is your base for the dozens of beautiful vegetable soups you will make throughout the growing season with fresh vegetables. Starchy-ish fresh peas and beans, even green beans, should be parboiled until tender before adding, and I wouldn’t add fresh corn at all, but that makes me an exception. Always add water because evaporation happens, and water is the preferred replacement. I like to add a little V-8, and I always seem to have a half an onion in the fridge I can use. Fresh squash can be diced and added raw, as it tends to meld as does—it should go without saying—fresh okra. As to herbs, I’m frugal; a pinch of thyme and a smidgen of oregano do just fine. Add salt with care and heat seasoning at the table. And yes, you can serve this warm or chilled. 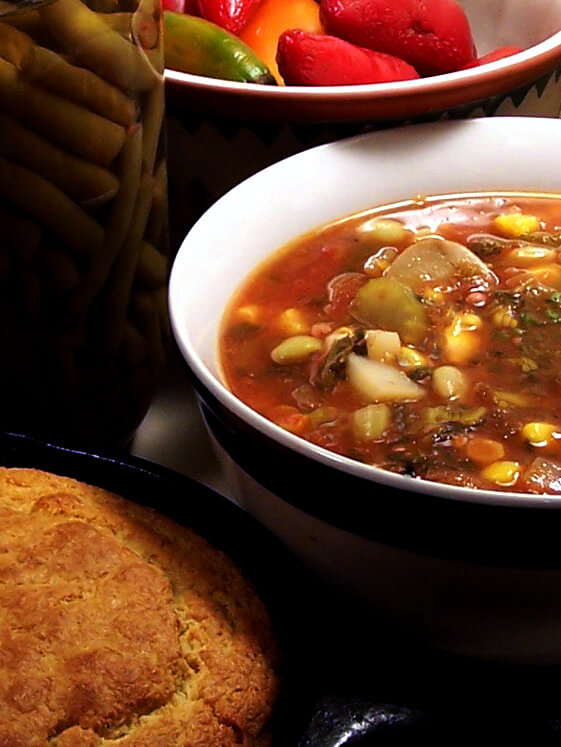 Whenever you see one of those lists of “The Best Cakes in Each State or “The United States of Sweets” or some such, you’re inevitably going to find a hodge-podge of dishes selected by some junior editor at whatever online ad magnet put it together, and while many of them have at least some rational connection with the state via an essential ingredient (e.g. anything involving peaches is a cinch for Georgia, same with cheese for Wisconsin) that’s by no means a hard and fast rule.

However, it should come as no surprise to any of you that most of the states in our Union actually have official state foods, and unsurprisingly most of them are desserts. Official state foods are usually designated to promote a state agricultural product or to recognize a food or dish that has by custom and tradition become characteristic of a particular state. Examples for the former include Vermont’s State Pie (apple), Maine’s State Dessert (blueberry pie, specifically made with Maine blueberries) and the Louisiana State Jellies (mayhaw jelly and Louisiana sugar cane jelly). Blueberries are also the featured fruit in the Minnesota State Cupcake as apples are in the New York State Muffin. The only official state food of Georgia is grits (State Prepared Food) while the Peach Pie is the State Dessert of Delaware and Texas (go figure).Other well-known state pies are those of Florida (Key Lime, of course) and Massachusetts (Boston Cream; the Massachusetts State Doughnut is also a Boston Cream). Massachusetts and New Mexico also have state State Cookies (chocolate chip and biscotto, respectively).

State foods of character and tradition include the locally famous Lane Cake, the State Dessert of Alabama, as well as the equally famous Smith Island Cake, which is that of Maryland. Utah has a State Snack Food (Jell-O!?), and it’s quite characteristic  that the State Snack of Texas is tortilla chips and salsa while that of New York is yogurt. California has all of four State Nuts (almond, pecan, walnut and pistachio).The Rhode Island State Appetizer is calamari. The South Carolina State Snack Food is boiled peanuts, its State Picnic Cuisine barbecue. Louisiana has a State Cuisine (gumbo). But Oklahomans have won the state food contest hands down with a complete State Meal: Chicken-fried steak, barbequed pork, fried okra, squash, cornbread, grits, corn, sausage with biscuits and gravy, black-eyed peas, strawberries, and pecan pie.

But back to the unofficial list. On any given one of these lists of “state cakes”, for Mississippi you’re always going to find Mississippi mud cake, which is not our official state cake. In fact, unless you count largemouth bass, Mississippi doesn’t have a state food. Mississippi mud cake is more of a fudge or a brownie than a cake, and that’s likely how it began, but around fifty years ago in the 70s when all sorts of craziness was going on (yes, I was there), marshmallows—inexplicably and unnecessarily—were introduced. Me, I think marshmallows are an unnecessary adulteration, and Australians seem to agree, since the Aussie mud cake—no, they do not call it Murrumbidgee mud cake—is marshmallow-free.

One icon deserves another, so here’s Tammy Wynette’s recipe for Mississippi mud cake, which she says was taught to her by her mother, Mildred Lee. 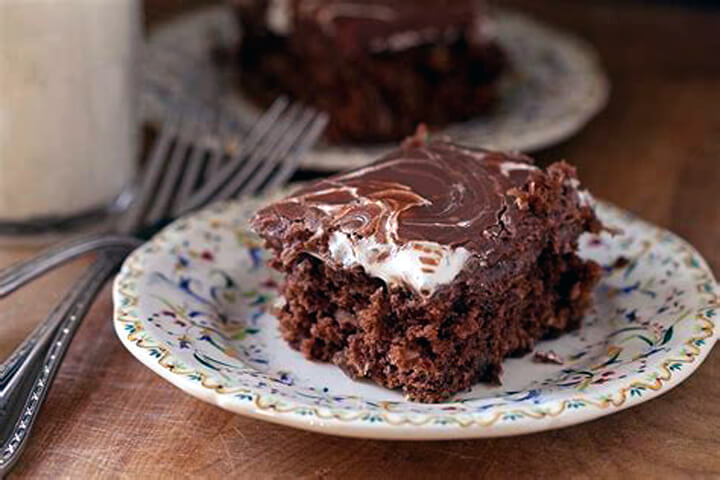