On August 21, a Notice of Intent was presented to Mississippi Landmarks Coordinator Katherine Anderson at the Mississippi Department of Archives & History. This notice was to inform her and the Historic Preservation division of MDAH that the owners of Smith Park, “the city of Jackson” intended to alter the park, which had been declared a Mississippi Landmark this past April 21. The notice reads, “In 1972 (sic) a concrete ‘creek’ was installed at Smith Park. This abandoned creek needs to be removed and filled in and sodded. It is dangerous at it is and non-functioning. This will generally double the size of the usable park, also smooth out berms and use dirt for filling in creek.” The date cited for initiation of this alteration is November 1.

Though the notice bears a stamped signature of Mayor Lumumba, the original was presented to Ms. Anderson by John Kane Ditto III. What this document proposes is nothing less than a razing of the park, essentially the first phase in the so-called renaissance that the “Friends of Smith Park” (of whom Ditto III is a charter member) have been planning, a makeover that would destroy the historical elements of the park (e.g. the Order of the Eastern Star Memorial, the iconic A-frame stage and the 1900 monument on the southwestern edge) and reduce its landscaping to a featureless, treeless plaza, nothing more than a nexus of concrete walks. The Notice of Intent states that the “creek”, which is actually a symbolic model of the Pearl River conceived by award-winning landscape designer Rick Griffin, has become “abandoned, ignored, a trash ‘receptacle’, dangerous and non-usable”. The fountains and pools are in fact functional, and they are no more “abandoned and ignored” or “dangerous and non-usable” than any number of many other features of downtown Jackson, Mississippi.

In affirming this document, Mayor Antar Lumumba–a self-confessed champion for the homeless–has abandoned his pledge to be mayor for “all the people” of Jackson and has thrown in his lot with the moneyed interests in the city, particularly those of Downtown Jackson Partners, a state-ordained fiefdom of Ben Allen, and the Dittos, who own the only available commercial property (200 North Congress) adjacent to the park. If this Notice of Intent is approved by the 9-member Mississippi Department of Archives & History board of trustees, which as it so happens is presided over by John Kane Ditto, Jr., then the last remaining greenspace in downtown Jackson will become a featureless “McPark”, without character, without history and without shade. If you, the citizens of Jackson, let your city government do landscaping for John Kane Ditto père et fils, then you’re a bigger bunch of suckers than I think you are. 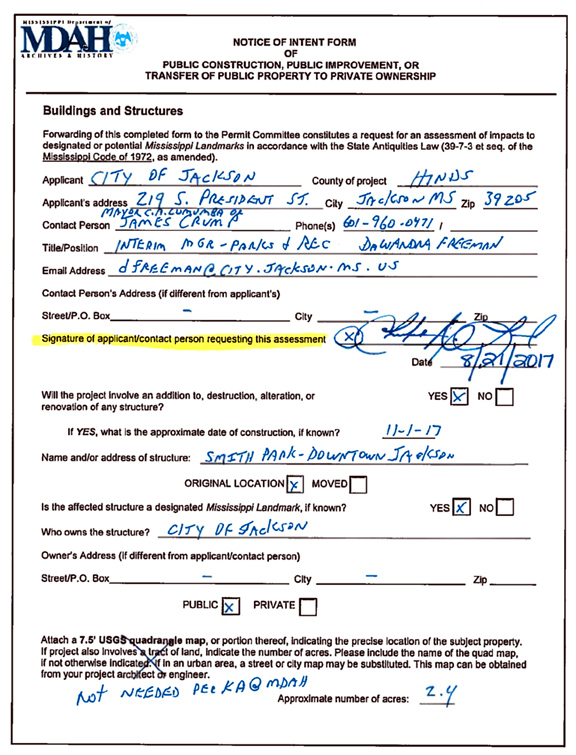 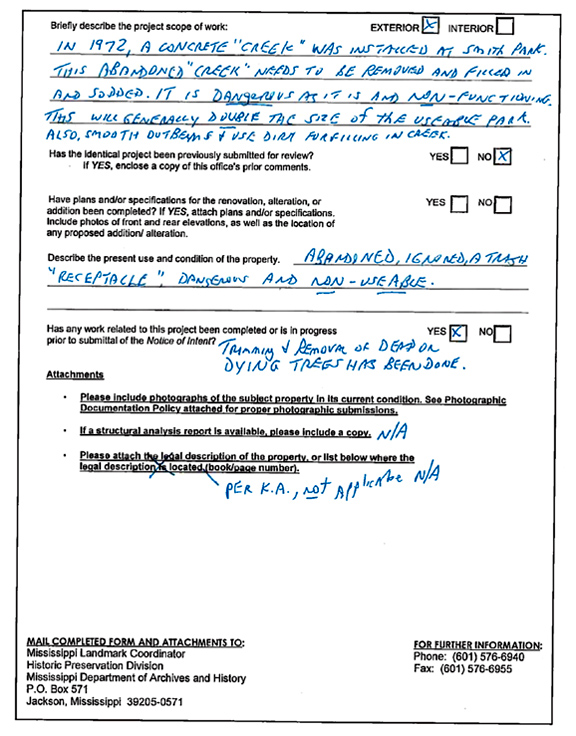