For sheer succulence, few fruits on earth can match a ripe-on-point peach fresh off the tree, and Escoffier, “the king of chefs and the chef of kings,” affirmed the fruit’s supremacy when he created an astoundingly superb yet simple dish to celebrate the great operatic coloratura soprano, Nellie Melba.

Dame Nellie Melba, (1861-1931), was a skilled pianist and organist as a youngster, but she did not study singing until in her twenties. She made her operatic debut as Gilda in Verdi’s Rigoletto in 1887 at Brussels under the name Melba, derived from that of the city of Melbourne. Until 1926 she sang in the principal opera houses of Europe and the United States, particularly Covent Garden and the Metropolitan Opera, excelling in Delibes’s Lakmé, as Marguerite in Gounod’s Faust, and as Violetta in Verdi’s La traviata. She was created a Dame of the British Empire in 1918. She returned to Melbourne in 1926. Her image is on the Australian one-hundred-dollar bill.

Melba was not known as a Wagner singer, although she occasionally sang Elsa in Lohengrin, which she did in 1892, at Covent Garden. The Duke of Orléans gave a dinner party at the Savoy to celebrate her triumph. For the occasion, Escoffier created a new dessert, and to display it, he used an ice sculpture of a swan, which is featured in the opera. The swan carried peaches topped with spun sugar which rested on a bed of vanilla ice cream. In 1900, Escoffier created a new version of the dessert for the occasion of the opening of the Carlton Hotel, where he was head chef. Escoffier omitted the ice swan and topped the peaches with raspberry purée.

Incidentally, in 1897, Nellie, who was “slimming,” complained that her bread was much too thick and sent Escoffier with it back to the Savoy kitchen. The chef returned to her table with a thinly sliced piece of toasted bread and promptly named it Melba toast in her honor.

Inferior versions of peach Melba substitute pears, apricots, or strawberries instead of peaches or use raspberry sauce or melted redcurrant jelly instead of raspberry purée. The original dessert used simple ingredients of “tender and very ripe peaches, vanilla ice cream, and a purée of sugared raspberry”. Escoffier himself said, “Any variation on this recipe ruins the delicate balance of its taste.” 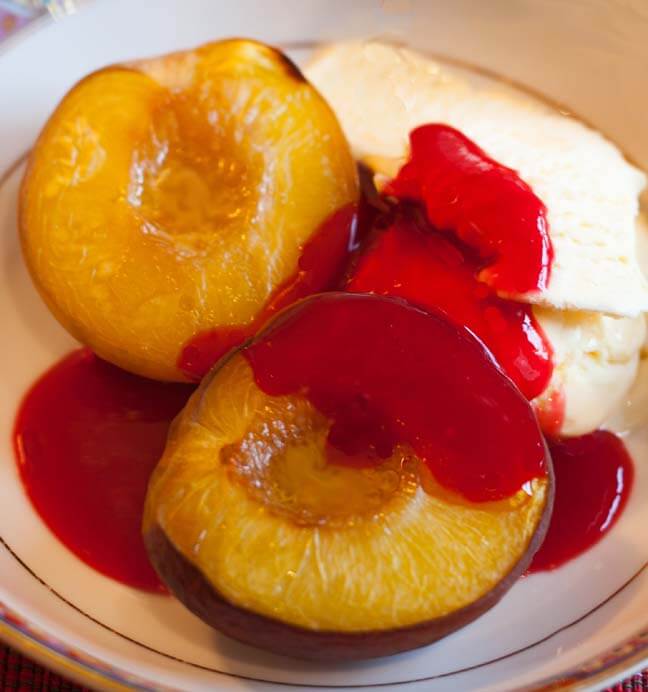