Travis Milton, a native of Russell County, Virginia, high in the Alleghenys, became a chef on the East Coast, but his thoughts kept returning to his childhood home. “The more I learned about the restaurant business, the more I appreciated the food culture I’d grown up in,” he says. “I started dreaming of a restaurant that would capture and celebrate that lifestyle, allow me to explore where it came from.”

Milton is profiled in a recent Gastro Obscura article, “The Chef Restoring Appalachia’s World-Class. No matter your definition of “world-class” the term seems incongruous to most when applied to Appalachia, a region of grinding poverty and hard-scrabble existence, so it’s not surprising that his idea was ill-received by his fellow chefs. “When I’d say ‘Appalachian Cuisine,’ they’d hit me with a shit-eating sneer,” says Milton. In 2010, at a New York restaurant, Milton was part of a group planning dishes that would “tell about who we are.” He wondered aloud about sourcing leather britches and greasy-backs, a type of beans common in mountain gardens.

The following afternoon, the head chef slapped a copy of Ernest Matthew Mickler’s White Trash Cooking onto Milton’s station. “He got in my face,” says Milton, “and started barking, ‘If this is what you wanna do in my kitchen then you can get the fuck out!’” Having White Trash Cooking slammed in his face was a turning point. To overcome the stereotypes, Milton realized, he’d need to be able to tell the story of Appalachian food, but writing on the region’s cuisine was mostly focused on single mothers dressing up SPAM in a sugary sauce and other relatively recent ways that Appalachian cooks respond to the poverty that is, for most, coal’s legacy in Appalachia.

While Victuals establishes a benchmark, the font and source for Appalachian food writing is The Foxfire Book of Appalachian Cookery: Regional Memorabilia and Recipes. First published in 1984, Appalachian Cookery has little resemblance to any other publication involving Southern foods. The Foxfire Project was the brain-child of Eliot Wigginton, a man from West Virginia who received an advanced education in the north and began teaching at a rural school in northeastern Georgia during the late 1960s. Called “foxfire” after a will-o’-the-wisp in mountain woods, his students collected folklore and customs in a series of oral histories that were first published in a 1972 anthology. Many more editions have followed as well as other volumes documenting Appalachian culture.

According to the text, some of the research and the photographic essays included in Appalachian Cookery were gathered for previous Foxfire books but were not selected for inclusion into an earlier volume. Appalachian Cookery stands out as the most complete and comprehensive record we have of the food, cooking and home life of southern Appalachia in early to mid-20th century. Most of the recipes are very simple; pound cake has four ingredients in equal measure. The book is also a primer on how to use homegrown or wild-gathered foods. Appalachian Cookery opens a door to a world far away from arugula and alien to star anise, a world where cooking was simple but not coarse, having a balance and symmetry all its own, dictated by the lessons of long-ago voices set in concert with the rhythm of the seasons. For those of us from the upland South, these are our roots. 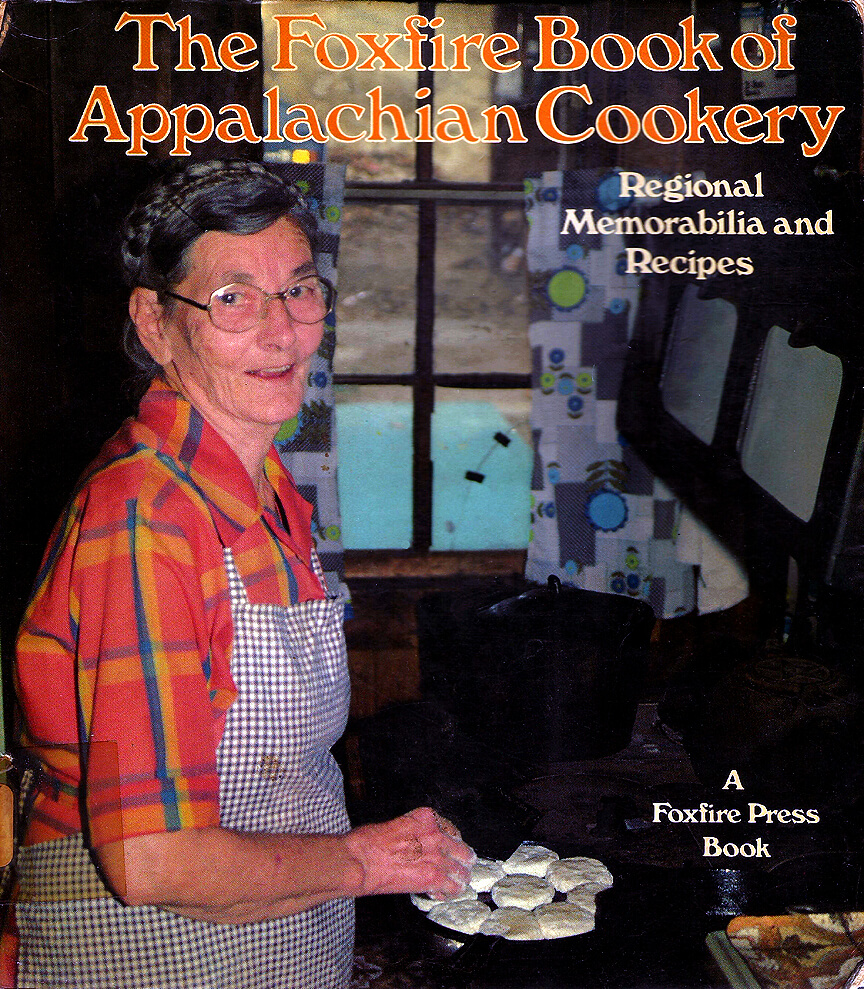