Whimsey rules with confections. Marzipan is particularly prone to such blithe abuse, finding itself fashioned into all sorts of flowers, fruits, animals, even people or parts thereof. Cakes also endure such treatment, particularly occasional cakes, but even “every day cakes” are fun, and daffodil cake is as light-hearted as it is light.

Of course daffodil cake doesn’t have daffodils in it no more than a hummingbird cake has hummingbirds or Girl Scout cookies are made out of girl scouts (daffodils happen to be poisonous) but it’s (partially) yellow and springy. This is an old recipe, appearing in Fannie Farmer and Betty Crocker books during the 1940s, a sure sign that it was probably being made and passed around at church bazaars and served on spring weekends long before then.

Daffodil cake is unique in that it is a combination sponge and angel food cake, which are both made with a meringue without oil or butter, but the yellow parts of a daffodil cake contain egg yolks—as does a sponge cake—and the white parts do not—as does an angel food. (Chiffon cakes, which appeared on tables at about the same time, are a meringue cake with oil.) You will not find an honest mix for any meringue cake in the grocery store; you’re going to have to make it from scratch, and it’s best to make on a clear, cool day because we all know that you can’t make a good meringue when it’s raining, don’t we?

Preheat oven to 350 degrees and set a rack to the lowest position. In a very large mixing bowl allow egg whites to stand at room temperature for 30 minutes. Sift together flour and 3/4 cup sugar 3 times and set aside. Add vanilla, cream of tartar and salt to egg whites. Beat with electric mixer on medium to high speed until soft peaks form; gradually add 3/4 cup sugar, 2 tablespoons at a time, beating until stiff peaks form. Sift one-fourth of the flour mixture over egg white mixture and fold in gently. Repeat with remaining flour mixture, using one-fourth of flour mixture each time. Transfer half of batter to another bowl. In a small mixing bowl beat egg yolks on high speed for 6 minutes or until thick and lemon-colored. Add lemon extract, mix and gently fold yolk mixture into half of egg whites. Alternately spoon yellow batter and white batter into an ungreased 10-inch tube pan and swirl with a spoon to marble. Bake for 40 to 45 minutes or until top springs back when lightly touched. Immediately invert cake in pan and cool completely before loosening cake to remove from pan. Flip cake onto a plate and sprinkle top with finely shredded lemon peel and powdered sugar; serve chilled. 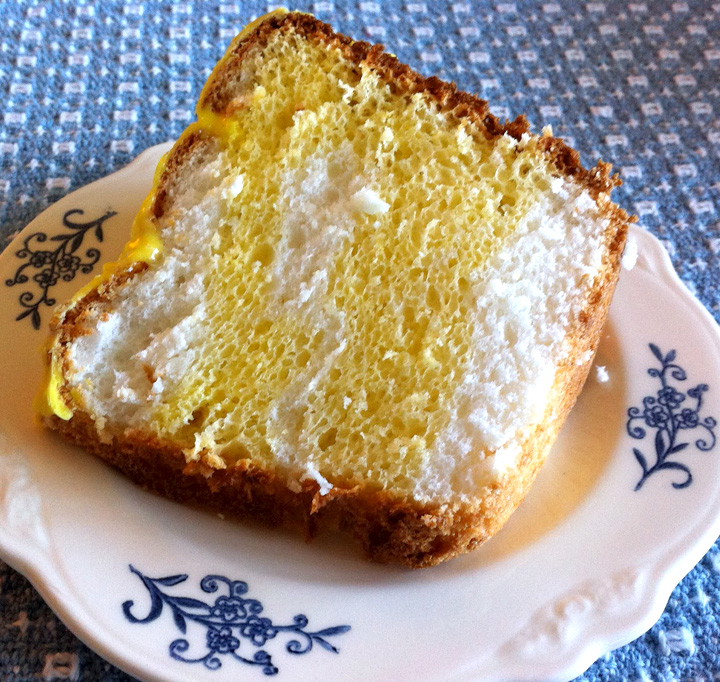