Oral histories are a portal for understanding not only a time and a place, but the character of its people. With Coming Out of the Magnolia Closet: Same-Sex Couples in Mississippi, John Marszalek III examines the lives of gay couples in Mississippi at a watershed in the history of gay activism: the Supreme Court ruling Obergefell v. Hodges (2015), which guarantees the fundamental right of marriage to same-sex couples. Marszalek serves on the faculty of the online mental health counseling program at Southern New Hampshire University; in this volume, his stated purpose it to provide, “a glimpse into the world of gay couples in Mississippi. How did we meet? What is it like to be gay in our communities? What type of reaction do we receive from our neighbors, families, and churches? Why do we live in Mississippi? Do we plan to stay or find a home elsewhere?”

Coming Out of the Magnolia Closet is structured around interviews of gay and lesbian couples living in each of the five regions of the state (Hills, Delta, Pines, Capital/River, and Coastal), in rural, small town, and metropolitan settings. Marszalek spoke with fifty couples: fifteen of those recorded conversations, “which best represented themes I heard from all the lesbian and gay couples I met,” are included in this book. Marszalek is meticulous in his procedure and is careful to preserve the anonymity of his subjects.

Marszalek’s selection of couples for his interviews were drawn from the US Census Bureau’s American Community Survey and the 2000 Census, which estimates 3,500 same-sex couples living in Mississippi. While his sample is limited, Marszalek worked to ensure it was representative by seeking diversity in gender, race, age, socioeconomic status, and length of relationship. He spoke to an equal number of male and female couples in ages from twenty-five to sixty-five, who had been in their relationships from seven to thirty years. Furthermore, the sample embraces professional, self-employed and blue-collar work settings.

The couples’ stories are at the heart of Coming Out of the Magnolia Closet. They discuss their places in the communities they call home, their relationships with family, and their experiences with church and religion. These voices are often poignant; they speak of tolerance rather than acceptance, of a tacit understanding that tolerance itself is achieved by keeping a low profile, and to avoid acting “too gay,” particularly in regard to public displays of affection. What emerges is the sense of a “social compact of silence” that John Howard mentions in Men Like That (1999), a monumental work on gay culture in Mississippi, and one that Marszalek frequently references.

Marszalek is not only a sympathetic listener—he includes his own narrative as a coupled gay man—but an accomplished scholar who provides the reader with a generous survey of his research and a review of the literature related to the content of each chapter. His sources encompass documents from history, sociology, psychology, and other disciplines.

There is still no legal protection against discrimination based on sexual orientation or identity, and gay couples in Mississippi fear being fired from a job or refused service at a business because they are in a same-sex relationship. Coming Out of the Magnolia Closet should be a guide for others to understanding that we are all in this life together, facing the same fears, sharing the same hopes, and that bias and prejudice toward others imposes a burden both ways. 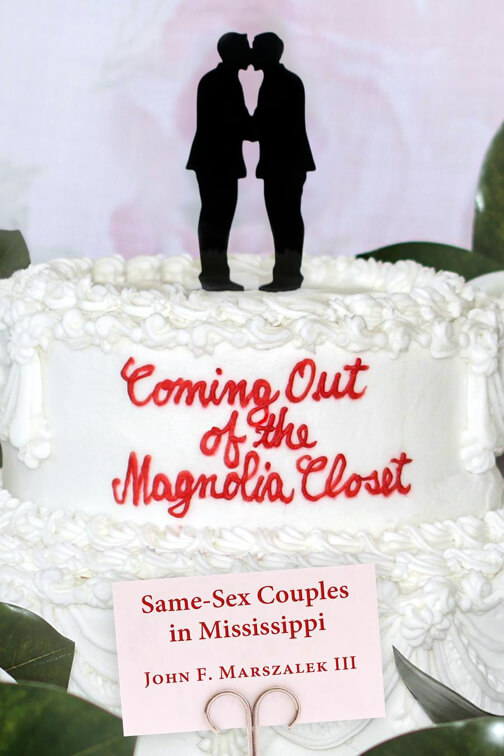