This is another dish we served at the Downtown Grill in Oxford. The recipe, like many of those on the menu, came from Paulette’s in Memphis when it was in its original location in Overton Square, before it moved to Mud Island/Harbor Town in 2011. George Falls told us that it was very popular with the “after-church crowd”, which had many of the sorts of little old ladies who tinted their hair in decidedly unnatural shades of magenta, lavender and powder-puff blue and tipped from their change purses.

Typically, the dish was made in batches of perhaps a gallon or two depending on the day, stored in the cooler, and the line cooks would reheat it per serving at the sauté station, adding a bit more stock and the wine, which was usually the house burgundy. It was served over buttered fettuccini, though we later changed that to rice, which we could store on the steam table. And George was right; it was popular with the older crowd, mainly because it was one of if not the most inexpensive item on the menu, and it required a minimum degree of heavy mastication, but it never caught on and was discontinued, as was much of the “Memphis menu” (as we called it) after the first year.

For my part, I thought it was a very good dish, particularly as a buffet item, which is why I recommend it being served in a chafing dish for a luncheon reception of some sort or perhaps an after-event late night gathering. While you could serve this with buttered potatoes of some sort, linguini or fettuccini would be (I think) more appropriate, as would any sort of rice. It’s particularly good with a nutty wild rice blend.

Drain, trim and cut one pound chicken livers into bite-size pieces. Sauté in butter with a sprinkling of black pepper until just done through; you want them pink, not overcooked. Set aside with liquid. In another pan, sauté in 3 tablespoons butter one clove of garlic, finely minced, two large minced shallots, and three ounces of mushrooms, thickly sliced. Sprinkle with two tablespoons of flour and mix well. Add one and a half to two cups of rich, flavorful beef stock to make a sauce, add about a half-cup or so good, full-bodied dry red wine, such as a Burgundy or Beaujolais, season with thyme and rosemary then reduce by a third or until thick and smooth. Add livers, mix well, salt to taste and finish with another jolt of wine and a pat of butter for gloss. 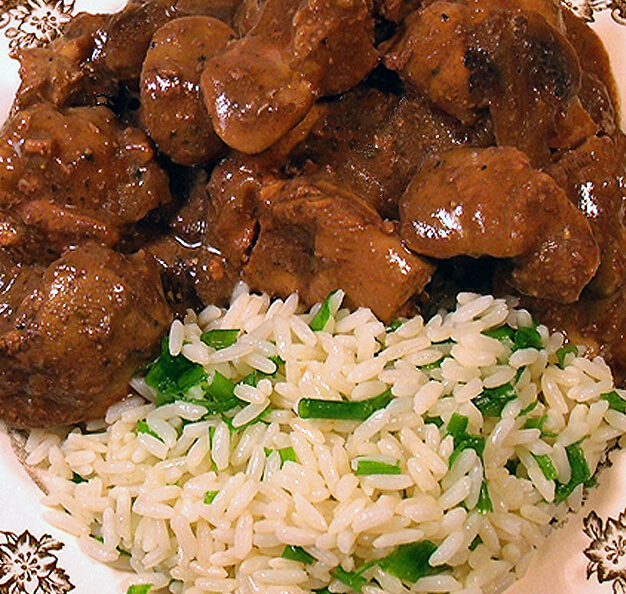