Some years ago, an obscure editor at a well-known magazine prevailed upon his famous food writer to come up with a piece on sardines. Now, an editor is nothing more than an ego who can spell, so to say that coercion was involved over this story is an understatement of near biblical proportions; the poor writer’s feet were probably held to some hellish, check-denying fire until he came up with a printable essay on a subject he obviously considered far beneath his dignity. The end product, a minor etude of culinary literature memorable primarily by its invective, was infused with caustic bemusement and only a very, very small degree of begrudging admiration for the fish itself. The subject took second place to the condescension that infected every sentence. I wish I had the essay at hand to give an example of scathing hauteur; trust me, us pissed off writers recognize one other.

What the writer was trying to do (with limited success) was to raise the sardine to such a degree of sophistication that it fit seamlessly in between the inexplicably anorexic homoerotic fashions, the absolutely incomprehensible art, and exhausting columns of blithering prose. He began with an “imagine this” sort of scenario in which a thin, impeccably dressed Parisienne strolls into a bistro on the Champs E’lysee, orders a beer with sardines au plat, then squats and gobbles without getting so much as a spot on her designer duds. Well, it could happen, I suppose; sardines au plat are little more than broiled herrings, but the idea of a chic young Frenchwoman sitting down to beer and sardines in the shadow of the Eiffel Tower is discordant, which of course is the point he was trying to make.

Now, sardines aren’t a specific kind of fish as much as they are a type of fish; many species of small herrings are caught, canned and marketed as sardines. Ounce for ounce, sardines rank among the most nutritious foodstuffs in the world: they’re chock-full of calcium, potassium, vitamin D and all the “good fats”; one can, about three and a half ounces drained, has less than 200 calories. They’re also (like most canned fish) ridiculously cheap, less than $2 a serving. Yet most people turn their noses up at sardines. Why? Well, they smell bad, for one thing, but that’s not the main reason; lots of people eat stuff that smells bad, especially when nutrition isn’t particularly a key consideration. No, the reason people don’t eat sardines is because in this neck of the woods they’re considered trashy, so trashy that you’ll not find a single sardine recipe in any of Jill Connor Browne’s otherwise excellent culinary compilations.

If you want to try sardines for the first time, get a can of Port Clydes (in oil) and drain them; use a colander if you feel the need, but do not rinse them with water. Instead, sprinkle them with a little freshly-squeezed lemon juice and just a bit of kosher salt, set them in a sealed container in the refrigerator until thoroughly chilled and eat them with sour gherkins, raw celery and onions, and have your favorite beer with them. Dill toast is wonderful alongside, but rye Melba will suffice and saltines of any sort will do any time at all. 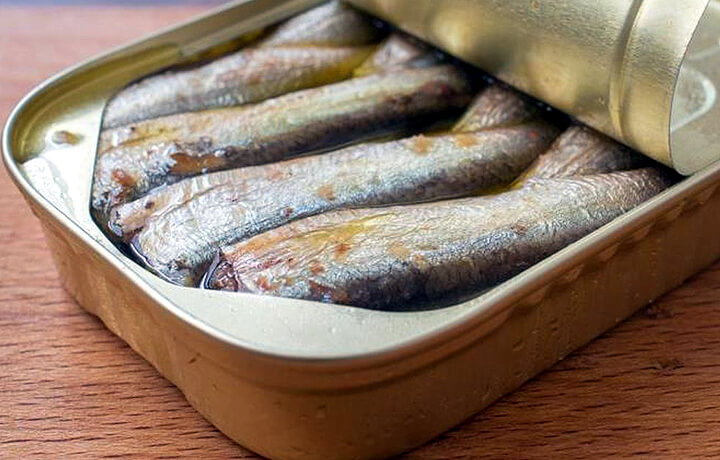 2 Replies to “The Sardonic Sardine”