Shortcake, like all quick breads, is even more American than apple pie, since chemical leavening was developed in the U.S. in the late18th century, and people began making apple pies in central Asia shortly after wheat was domesticated. The shortcake you’re likely to find sold in supermarkets strategically placed near a display of strawberries is actually a concave sponge cake, which is far different from the big, sweet biscuit that a real shortcake actually is. While shortcake is most often served with macerated strawberries, any fruit or berry in season works just as well.

Any good cookbook will give you a simple recipe for shortcake with flour, leavening, butter, sugar, and whole milk or cream. But if you google shortcake, you’re going to find a recipe involving sieved boiled egg yolks that purportedly came from James Beard’s mother. Now, I ask you: can there be a more authoritative source for a recipe than one from the mother of the “Dean of American Cookery?” No, but I’m calling bullshit on this one, because eggs in any form are superfluous in a shortbread recipe, and sieved yolks are an even more suspicious inclusion. This recipe, used by a St. Louis restaurant, states that it was never printed in one of Beard’s cookbooks (he wrote dozens), and for good reason; because it SUCKS! Here is Beard’s recipe for shortcake from his enduring 1972 classic, American Cooking.

Sift a tablespoon of baking powder and a half teaspoon salt into two cups all-purpose flour, cut in a half stick cold butter, add about three-quarters cup of (cold!) cream and a quarter cup of sugar. A teaspoon of vanilla is always a nice touch. Work quickly into a sticky dough and divide in two, one about twice as large as the other. Pat out on a floured board into 6/8 inches diameter, brush the top of the larger with softened butter, place the smaller on top, and butter again. Put the dough on a well-buttered cookie sheet. (I always used buttered parchment paper as well.) Place in an oven that has been pe-heated to 450. Bake for about fifteen-twenty minutes until golden. Let the cake cool before carefully removing the top layer. Fill with macerated berries or fruit and top with whipped cream. And not that crap in a can, with is only good for a buzz at a pajama party. 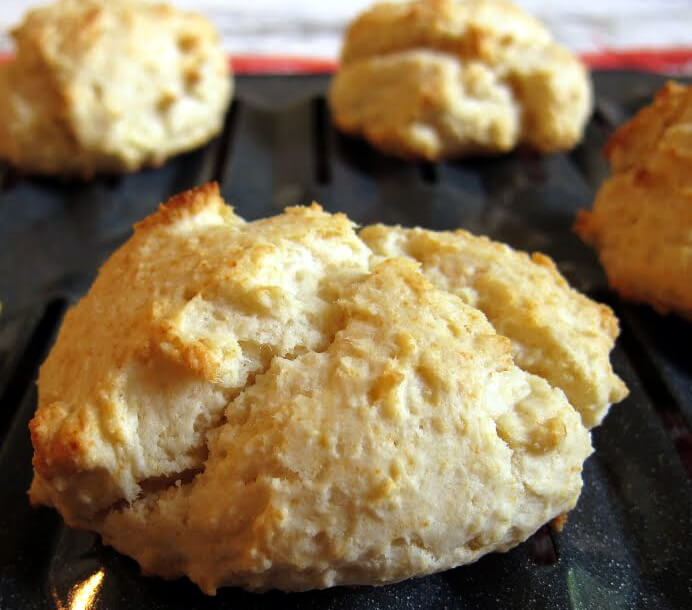