Craig Claiborne wrote his tell-all autobiography A Feast Made for Laughter (Doubleday, 1982) when he was undergoing intense psychotherapy (ostensibly for alcoholism; “self-destruction” triggered by “self-detestation”) that given a convoluted assessment of his mother’s smothering influence was no doubt intensely Freudian. In the end, he concludes that he didn’t hate his mother, that she was “a victim of culture, of her time and place” like Amanda Wingfield you might say or Claiborne himself mayhap.

By all accounts Mary Kathleen Craig Claiborne was a formidable woman who supported her family after Mr. Claiborne lost a fabled family fortune by taking in boarders, including psychologist and sociologist John Dollard who stayed in Indianola while conducting research for his Caste and Class in a Southern Town (1937). During his stay, Dollard committed what might well be the most grievous social error possible in the South, showing great disrespect to his hostess by disrespecting her cooking. According to Claiborne, “In the beginning he criticized the cooking of the greens, complaining that there was not a vitamin left in the lot. And as a result of his well-intentioned explanations and the base encouragement of the other boarders, my mother willingly committed one of the most wicked acts of her life. Dr. Dollard was placed at a bridge table, covered, of course, with linen, and set with sterling, and he was served a mess of raw greens that he ate with considerable and admirable composure and lack of resentment.” Years later, in the early 1970s, Claiborne recounts wandering into the photographic studio at the New York Times, glanced at the assignment sheet and saw the name “John Dollard, Yale”. As he walked in, Dollard walked out, and Claiborne introduced himself. “How’s your mother,” Dollard asked. “She’s a great woman.”

The best evidence we have of Claiborne’s filial love is his recipe for her chicken spaghetti, “printed on many occasions, for it, more than any other, was my favorite dish as a child, and I still prepare it.” Claiborne finds it, with characteristic affectation, “notably akin to certain authentic Italian sauces, notably a ragù Bolognese made with ground meat in a tomato and cream sauce.” Then he goes so far as to say that it was strictly his mother’s creation, and “she was famous for it up and down the Mississippi Delta.” Well, certainly her version is her own; it includes ground beef and pork as well as chicken and is undoubtedly one of the most complicated recipes Claiborne, whose recitation is his most meticulous if not to say fastidious, ever published.

Chicken spaghetti simply can’t be credited to the creativity of any one individual cook; people have been combining chicken and noodles of some kind since the dawn of history, and chicken spaghetti in some form or another has been around in Mississippi ever since pasta began being marketed here. You’re going to find two in the Mississippi Home Extension Service’s The Mississippi Cookbook, one from Ovett, the other from Hickory, both about as far away from the Delta as you can get without getting wet.

In its most basic incarnation, chicken spaghetti is nothing more than cooked spaghetti or vermicelli noodles mixed with a can of cream of chicken soup, topped with Kraft Parmesan and stuffed in a hot oven. In more labor-intensive versions, mushrooms (Green Giant or such) are usually involved, as are onions and bell pepper and a white sauce, but diced tomatoes are a hit-or-miss option. And even though Mrs. Claiborne topped her chicken spaghetti with cheddar, if you ask me, that’s just trashy; use Parmesan and mozzarella. 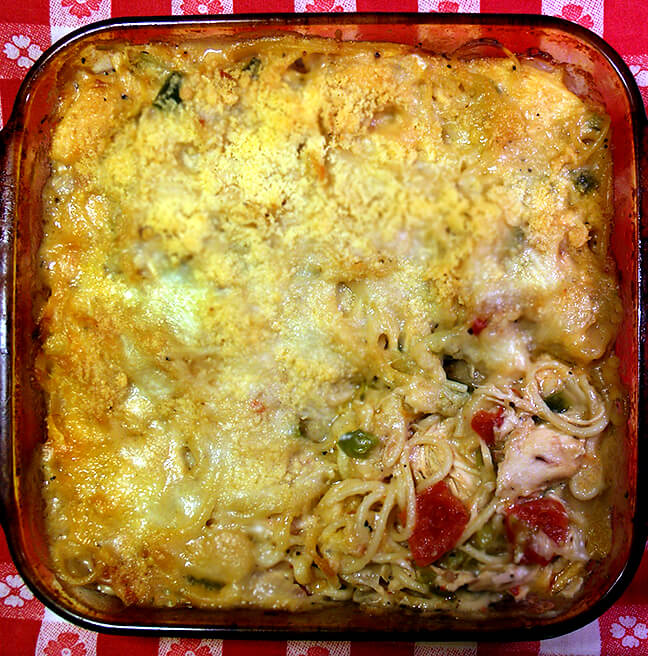