This dish has like so many others—gingerbread, for example, or roast turkey—become needlessly consigned to a specific winter holiday, but the dessert could easily fit on any table. Most recipes have no more than four ingredients—crème fraiche, cream cheese, egg whites and sugar—though the misguided might add vanilla or lemon. Recipes will ofen stipulate crème fraiche or sour cream, and for years I’ve been making a coeur a la crème using sour cream for convenience. This year, I’ve upped my game and made crème fraiche, which is not difficult; a little goes a long way and  keeps well.

You can make a simple crème fraiche using cultured buttermilk and whole cream from the supermarket, but if you’re going to bother to make it at all, do the best you can. I did not want to buy a packet of the crème fraiche culture, which seemed to me like a slacker’s option, so I trotted down to the Mississippi Farmer’s Market and bought fresh whole milk and buttermilk from T&R Dairy. Their lightly pasteurized products contain lactic bacteria needed for a good crème fraiche. I made a culture using a cup of whole milk, a quarter cup of buttermilk and a spoonful of store-bought sour cream, which does have a tiny bit of its characteristic bacteria. I kept the starter out overnight, and by morning it had thickened to a dense slurry. I added a half cup or so of that to a quart of whole cream from the supermarket, and it worked like a charm. I ended up with a thick, tart crème fraiche, which I’ll tend to as I would a sourdough. In time, with added culture from T&D, I’m hoping it will mellow and enrich.

Now, if you happen to frequent the kinds of stores that sell such things as stainless steel strawberry stem removers,  chromium banana slicers and cast-iron hot dog toasters, then you’re likely to run into these cute little ceramic heart molds with holes that are made specifically for a coeur le crème. Since I am just not a Williams-Sonoma-type person, I went to the Dollar Store on Fortification and found a plastic, heart-shaped container with Ninja Turtles embossed on the front (“Be My Bodacious Valentine!”) that was just the right size and grabbing a packet of cheesecloth from McDade’s—yes, can buy cheesecloth at McDade’s (!)—I was ready to make my heart of cream. I burned holes in the plastic with a hot nail, lined the mold—for that’s what it had become—with damp cheesecloth, mixed one cup of my crème fraiche with six ounces of cream cheese, blended in two (organic) stiffly-beaten egg whites and a tablespoon of confectioner’s sugar. I placed the coeur on a plate in the coldest part of the refrigerator for several hours, inverted it onto a server, removed the cloth and garnished with raspberries, though any kind of berry would have been good this time of the year, even bananas. 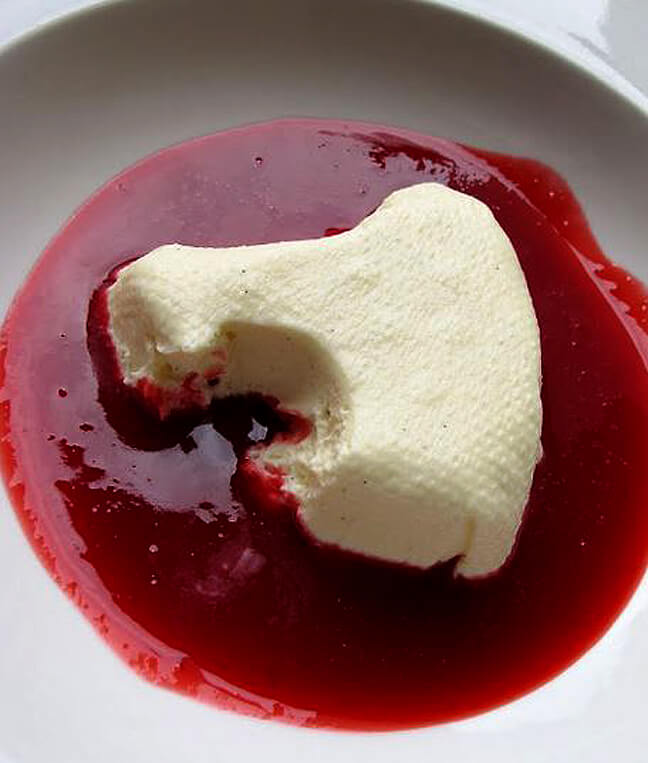