In 1914, Ines, the wife of Alfredo di Lelio, who ran a restaurant on the Via della Scrofa in Rome, was suffering from almost incessant nausea during her pregnancy with her first child. One of the few foods she was able to keep down was a dish of plain pasta, pasta in bianco, or white pasta, Alfredo made fresh and tossed with butter and grated Parmesan. Alfredo eventually added it to the restaurant’s menu, where in 1920 it was tasted by Douglas Fairbanks and Mary Pickford, who were visiting the city on their honeymoon. That day, the pasta happened to be fettuccini. They asked for the recipe, brought it home to the States, and sent a gift of a gold fork and spoon engraved with the words, “to Alfredo the King of the noodles” and their names.

Eating “Alfredo’s fettuccine” on trips to Rome became a destination for the Hollywood elite, and other tourists followed suit. Di Lilio sold the restaurant in 1943, but the new owner kept the restaurant’s name (Alfredo alla Scrofa), the menu, and the celebrity photos on the wall. In 1950, Alfredo and his son Armando opened another restaurant, Il Vero Alfredo, “the true Alfredo,” which is now managed by Alfredo’s grandchildren. Both restaurants claim to have originated the dish. Fettuccine alfredo, which in Italy is nothing more than buttered noodles with dry cheese, didn’t take off in Italy as it did in the United States, where it was popularized by another Alfredo’s opened by di Lilio and a partner near Rockefeller Center in New York City.

An American alfredo (with cream) is at best a simple reduction with a good hard grating cheese like Parmesan or Romano, prepared for individual servings to be eaten immediately. You can use almost any pasta, but you must use whole cream and freshly grated cheese (none of that stuff in the round green container, okay?) Cook the pasta beforehand, using about six to eight ounces of uncooked pasta per serving, making two cups or so cooked until just done, coated with vegetable oil and stored in a sealed container. When ready, heat your saucepan, add about three tablespoons butter (be generous), then working quickly, add a very generous handful of pasta, toss to coat with butter, then add about a half cup cream. Toss again while adding enough grated cheese to make a thick, creamy sauce. You shouldn’t need salt, just a little pepper. Serve at once. 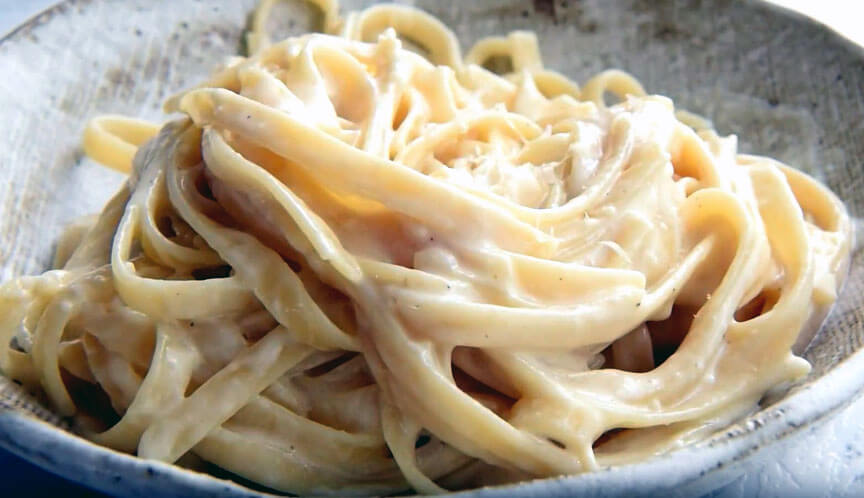 One Reply to “Fettucini Alfredo”