Mamaw Onsby lived in a small two-room house set back from ours under a huge white oak with thick knotted roots that gripped the earth like the toes of Antaeus. She had come to live there after her husband of sixty-odd years had died, and she was perfectly content, rarely coming to our house to visit, usually sitting at home listening to the radio and reading her Bible. Daddy tried to put an air conditioner in her window, but she wouldn’t have it. She was a tiny old woman, not much taller than I was at 11 when she died, and like many women of her generation who considered smoking unladylike, Mamaw dipped snuff (Garrett) and would make snuff out of cocoa and sugar for us to dip with twigs from the big black gum tree that grew near the road.

Her home was an early destination for me and her other great-grandchildren because she would make biscuits every morning, big, fat cat-head biscuits that she baked in an antediluvian skillet. Mamaw usually made sawmill gravy to go with the biscuits, but my brother Tom always asked her to make chocolate gravy. She’d look at him and say, “Oh, this thickenin’ gravy ain’t good enough for you, is it?” My brotherTom, little devil he was, would say “NO!” as loud as he could, and Mamaw, with a mumble about him being “just like a damned Onsby” would make chocolate gravy. The rest of us to be polite always had a biscuit with regular gravy, but she made us have another with chocolate “so it won’t be wasted”. It never was.

Heat two cups whole milk with a pat of butter; mix very well three tablespoons cocoa, two tablespoons plain flour, three quarters of a cup of sugar, add to warm milk with a whisk, stirring vigorously to prevent lumping. Heat until gravy thickens. Some people add vanilla to this, but for the life of me, I don’t know why. 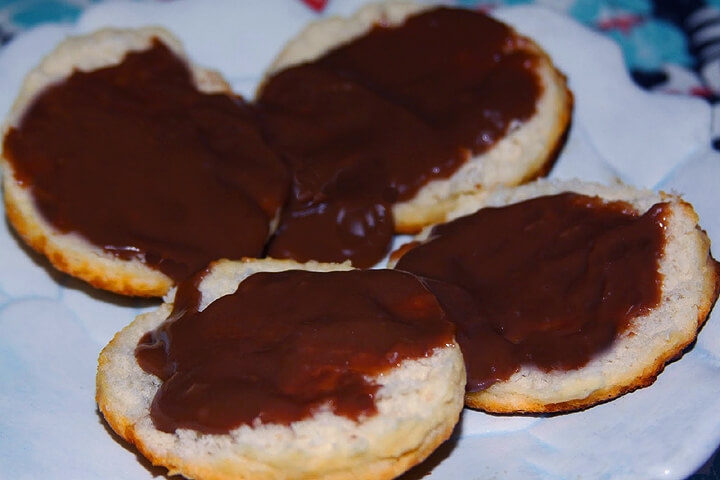