Not long ago a friend said that he who ate the first eggplant was much more courageous than he who ate the first oyster. (Yes, they were both guys; Urk, the Australopithecus I channel to know such things told me so). Oysters, after all, are mere mollusks while eggplants are noxious nightshades. Since eggplant must be gussied up quite a bit before I’ll make a meal with it, I agreed with fervor. Fortunately, the eggplant, like Cher, has so little character that it’s a pliable basis for dozens of really good dishes such as this Sicilian nosh which itself has many variations, served hot or cold, as a side or a spread. A friend makes vegetarian muffalettas with it, and while purists may wail, there’s nothing to stop you from using caponata instead of olive relish on a meat muffaletta. It’s simple to make, keeps well, and the flavor improves with age. This recipe makes about a quart.

Peel and cube one large eggplant, stew in olive oil with a finely-minced clove of garlic and about half a cup each of chopped celery and sweet onion. This is one of the few recipes you’ll find me recommending a sweet onion; caponata is a sweet/sour concoction, and I prefer to use vegetables and dried fruit for the sweetness instead of sugar. You’ll add maybe a rind of smoked sweet red pepper (a ripe pickled cherry is a nice touch, too), a scant handful of chopped olives and a tablespoon or two of tomato paste to round out the (somewhat) savory elements along with a jolt of strong red wine for both you and the pan. For out-and-out sweetness, use a half cup of dried fruit, figs being excruciatingly appropriate, but don’t let that stop you from using the raisins, dates or apricots you have on hand. A heaping teaspoon of capers (the eponymous and therefore compulsory component) gives enough salt. and a measure of herbal vinegar will set the tartness. With seasonings you’re on your own, but don’t use too much of anything; let the meld define the flavor. 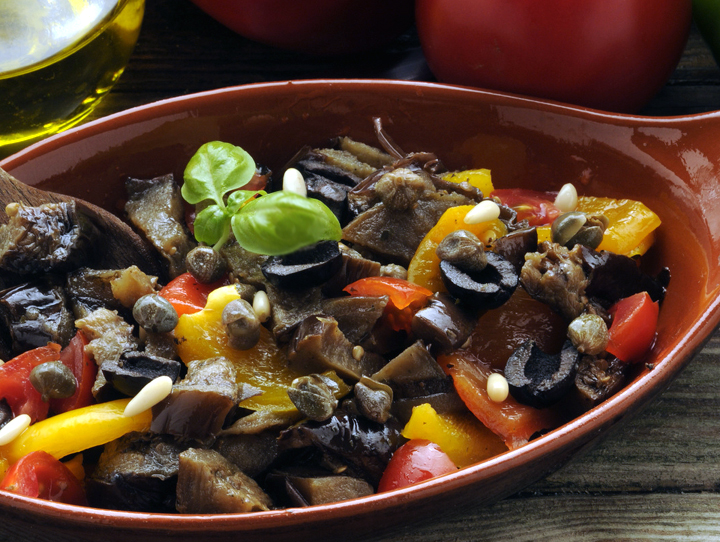