This, the first of four in a history of the Belhaven neighborhood in Jackson, Mississippi, was written by resident, journalist and historian Bill Harvey.

When people ask if I live in Jackson, I tell them, “No, I live in Belhaven”. While the locations overlap, Belhaven sounds better. Where in Jackson is Belhaven? Conventional wisdom outlines it as Fortification to the south, State St. to the west, Riverside Dr. to the north and the Pearl River to the east. While never a political subdivision by that name, Belhaven’s name  grew up around the college and is more than just a name.

The area south of Fortification is officially known as Belhaven Heights, a neighborhood older than “Belhaven” and more official, with a history of its own.  It has its own story to tell and may do so in future writings, but for now “our Belhaven” will encompass the above parameters – with perhaps a sneaky tentacle reaching out occasionally to the west or south to briefly touch a historical moment. 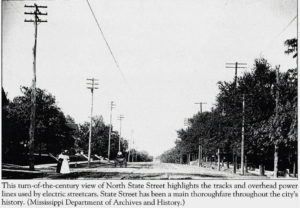 Jackson in 1900 had a population of 7,914. Mississippi’s capital city since 1823, Jackson grew slowly for a variety of reasons. Union Generals Grant and Sherman burned most of the city to the ground in 1863, sparing only a few structures for use by their men and the City Hall because of the Masonic Lodge on the top floor. The city was known then and even today as “Chimneyville”. 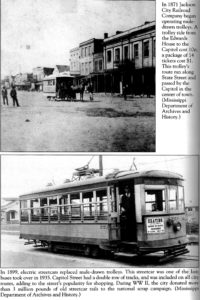 Streets were mainly gravel and mud and Town Creek flooded the downtown area on an annual basis. The business community consisted of small shops and professional offices clustered around the Old Capitol, South State and Commerce Streets. Capitol Street, other than the Governor’s Mansion, was largely residential, tree lined and dusty. It was a great leap forward in 1899 when mule drawn trolleys were replaced with electric cars much to the satisfaction of the mules.

The turn of the 20th century brought  noticeably progressive changes to Mississippi and the nation. The U.S. population stood at 76,212,000 and there were 45 states. William McKinley was president and the world, for a time, was at peace. In the year 1900, Henry Ford introduced his first commercial vehicle, an electric powered delivery wagon, Frank Baum copywrited his book The Land of Oz, which later became the Wizard and Puerto Rico became a new American territory.

Mississippi at the turn of the last century was recovering from the Great Civil War, Reconstruction and the loss of manpower from that conflict. Essentially rural and agricultural, what little it had was concentrated in a few of the larger cities. The Gilded Age had passed but cotton, while no longer king, was the dominant crop along with the lumber industry and sorghum. The Democrat party controlled all politics and for some reason the era was known as the Progressive Age.

Mississippi’s Governor at the turn of the century was Andrew Longino, its Lt. Governor James T. Harrison. The Attorney General was Monroe McClung, Secretary of State, John Logan Power and the Treasurer was J.R. Stowers. The state’s population stood at 1,551,000, growing at about 15% a year. Vicksburg was the largest city. The Vicksburg and Alabama Railroad transversed the state from west to east and the Gulf and Ship Island Railway was newly constructed from Jackson to the Gulf Coast. 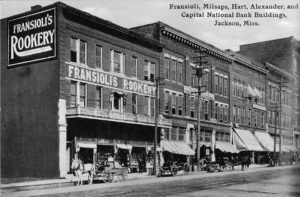 The state’s capital city was beginning to wake up from the deprivations of war and reconstruction. Shopping at Christmas in Jackson was mostly done at the Rookery, a downtown variety store which specialized in toys, tinsels and festive clothing designed to gladden the hearts of little folks. Colleges, state institutions, theaters, banks, churches and department stores bloomed along the downtown streets as more merchants moved from the environs to the city. It was an exciting time. 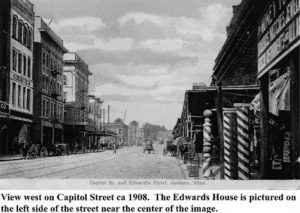 Jackson’s northern boundary was Manship Street (North Park Addition) in 1900. The city ran south to Silas Brown and out to the area of Monument and W. Capitol to the west. Residents lived along north-south streets radiating from Capitol Street, along the river streets of Pearl, Pascagoula, Amite and Tombigbee and around Union station at Gallatin. Outlying areas were along the Clinton Road (W. Capitol), where a new cemetery, Cedarlawn had just opened, Asylum Road (later Woodrow Wilson to the northwest) and into the estates of Livingston, Whitfield and Cohea. Fondren was a separate town.

An interesting adjunct to south central Jackson was Duttoville. Built in the late 19th century by Catholic priest Father Louis Dutto, it was a self-contained village with small homes, a fire station, grocery stores, a Catholic Church and a park. It was added to the city in later years but has been nearly absorbed in modern times by urban growth. 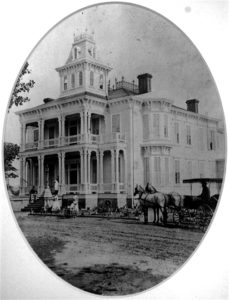 In the midst of this growth and urban development an institution was born in 1894 when Dr. Louis Fitzhugh acquired the Jones Hamilton mansion near the northeast corner of Bellevue and Jefferson Streets. He established a school for girls the following year. It had seven students and Dr. Fitzhugh. The home was destroyed by fire shortly thereafter but was rebuilt and named for Colonel Hamilton’s Scottish forbearer, first Lord of Belhaven.

A neighborhood was born.

Sources for History of Belhaven: Part 1

5 Replies to “A History of Belhaven: Part 1, Birth of a Neighborhood”