I am not from Jackson, nor (even worse) am I from Belhaven. This relegates me to troglodyte status to the natives to this fair city, but before you begin casting aspersions (or something sharper and heavier) let me assure you that Seta Sancton’s The World from Gillespie Place goes a very long way towards explaining why I and others love it so.

Given my primeval ignorance, of course I had to find out who Mrs. Sancton was, and given that I know so few people here, I decided to simply do what I do best and research the matter. This eventually led me to contact Tom Sancton, who among other things is former Paris bureau chief for TIME magazine, professor of journalism at the American University of Paris, Andrew Mellon Professor in the Humanities at Tulane and a jazz clarinetist to boot. He’s also likely to be one of those irritating people who complete the NYTimes crossword even before they finish their second cup of coffee. In response to my query, Mr. Sancton wrote:

Seta Alexander Sancton (1915-2007) was my mother. She was born in Jackson, on North State Street, into a prominent local family (Whartons on mother’s side, Alexanders on father’s side). Her father was Julian P. Alexander, a graduate of Princeton and Ole Miss law school, and an associate justice on the Mississippi Supreme Court. She graduated from Millsaps College, where she was a member of Chi Omega. She was a close personal friend of Eudora Welty, a neighbor from childhood. (My mother’s family lived first on Gillespie Place, then at 1616 Poplar Blvd; Eudora was on Pinehurst.) Seta married my father, New Orleans journalist and novelist Thomas Sancton, in 1941. They lived mostly in New Orleans and had three children of which I am the youngest. When my mother was in her 70s, she decided to write down some family stories and memories for her children and grandchildren. She started jotting down stories on notepaper, the back of envelopes, whatever she had at hand, adding stick figure illustrations as she went along. The result was the book you have in hand. In the 1990s she recorded readings of some of the stories.
Best regards,

Seta’s book is the memoir of city full of “sugar and spice and everything nice”, of June bugs and fig trees, lavender lantana and magnolia musk, braided biscuits, sidewalk parades, and ragtime on the Victrolas. “Though Edward VII was no longer on the throne,” Seta writes, “the temper of the times remained Edwardian for our mothers, our grandmothers and for us children.”

The World from Gillespie is a world where maids took children to Smith Park to play on the swings and slides, feed the swan, and eat sugar cookies in the miniature Greek pagoda. Home libraries offered volumes of Dickens, Thackeray, Tennyson and the best-selling works of Zane Gray. Gillespie Place itself was a new subdivision off State Street, and having a mother who was Episcopal and a father who was a Presbyterian was awkward. Going to the state fair was a landmark event as was going downtown to eat at the Bon Ton, the Pantaze, or the Edwards House. Seta’s eyes are filled with the genteel character of Jackson during the 1920s. Yes, of course poverty and oppression were rife at the time, but those and other unpleasantries such as war and epidemics are set aside for bridge luncheons, birthday parties, dragonflies, and swimming in Livingston Lake.

I’m charmed by this picture of Jackson’s past, watch for glimpses of it now, and see it every day. Memory, my children, is a living thing. 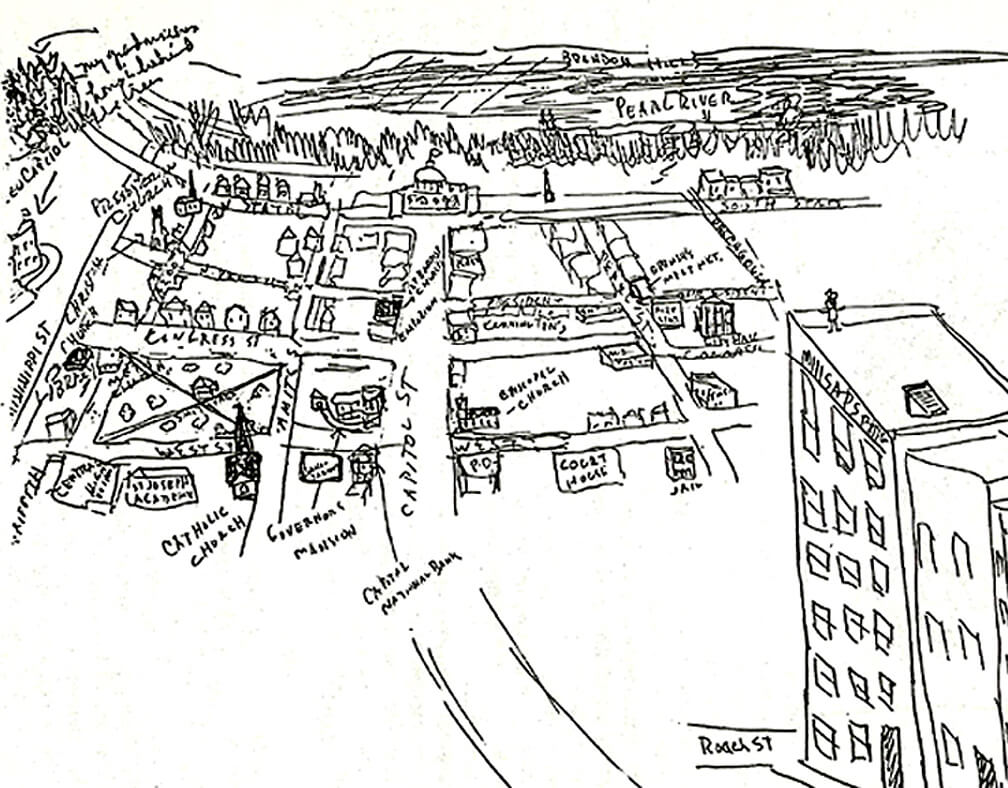