Salmagundi—like pettifoggery, kittywampus or hullabaloo—is one of those words you want to just pick off the page, cuddle and tease with a string, and the dish is just as playful. Claiborne—and All Who Sailed in Him—declared, “There is something about the word ‘salmagundi’ that has an unmistakable appeal for savants with a leaning toward gourmandism.” Craig had a habit of being pontifical. Honestly. I can’t count number of times I’ve wanted to kick that old queen under the table.

Salmagundi isn’t so much a dish as it is a presentation along the lines of an antipasto or a smorgasbord. Salmagundi is also quite English, having blipped onto the OED radar sometime around 1400. Mind you, I’m not some maverick etymologist who strays into the kitchen to make corn sticks; no matter the origin of the word, salmagundi is simply a way to serve a selection of cold vegetables, pickles, meats and citrus mounded on a tray and served with tongs and forks as you would any large salad.

By precedent, you want your meat (classic poached chicken or upscale to smoked salmon, mayhap) in the middle atop greens with rings of pickles, cooked eggs, raw or blanched vegetables, citrus, nuts, sausages, cold fish—anchovies are a classic addition—what have you. Pretty much anything goes with the exception of cheese, which isn’t included in any reliable (meaning historic) recipe. The emphasis should be on piquancy set off by elements that are crisp and bland. Serve with an herby oil and vinegar dressing.

Why don’t today’s chefs create dishes in honor of performing artists like those who gave us Melba toast and turkey Tetrazzini? Where’s the Bowie sundae, the Madonna cupcake or the Star Wars souffle? The need, as I see it, isn’t so much for the dishes, which are admittedly key components, but for the stories they may tell, like this one.

In 1923, George Arliss took the stage as the Rajah of Rukh in The Green Goddess. Arliss was at the height of his career. He went on to repeat his performance in the film version of the play and received an Academy Award nomination for the role, ironically losing to himself that same year (1930) when he played British prime minister Benjamin Disraeli in the eponymous film.

While in San Francisco, Arliss stayed at The Palace Hotel, and for a banquet in Arliss’s honor, the executive chef of the hotel, Philippe Roemer, himself a celebrity, created an original salad dressing with an assortment of finely chopped green herbs to suggest the name of the play. The dressing is a signature recipe in the hotel’s Garden Court Restaurant, most often served with the Dungeness Crab Salad. 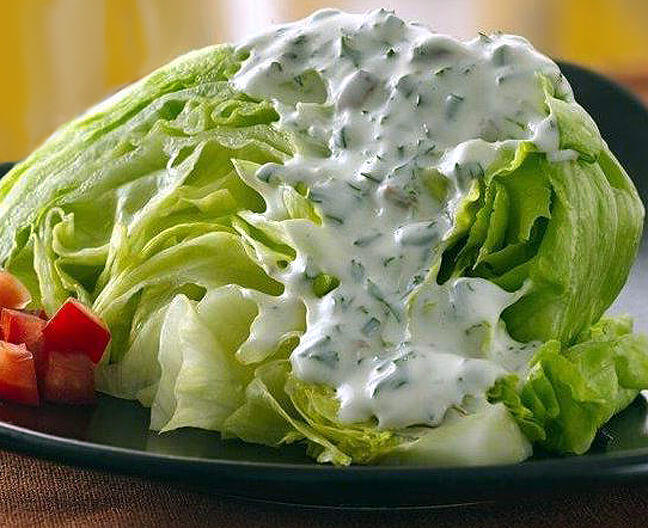