The Snapper en Mornay was one of the most popular dishes at the Warehouse in Oxford because it was distinguished by a great home-made sauce. Jean Tatum Thomas once told me that if I were to put our Mornay on a Turkish towel she’d eat it, and don’t put it past me to try her one day. On the menus, it was billed as “Red Snapper en Mornay”, a distinctly Gulf of Mexico recipe. Our snapper came from Tarpon Springs, Florida, the home of many good Greek fishermen, but the sauce was our own.

When I came on to the Warehouse, James Ruffin made the Mornay, and because it was such a big seller, he was reluctant to teach me how to make it. For him, knowing how to make the Mornay represented job security. Now, there was no way that the owners were going to fire James; he worked hard, he’d been cooking there since they were waiters and everyone had a great deal of respect for him even though he took every opportunity to scare the living hell out of people every chance he got. Still James did not like the idea that they brought this young white guy (me) into the kitchen to help. It took months of working side-by-side with him before he let me even watch him make the sauce. I didn’t say a word, I just watched him and every now and then he’d tell me to go get something from the cooler or off the shelf. Then one day he said he was damned tired of having to make it all the time and told me to do it, he’d show me how. It was a watershed moment for me. After that, of course, we’d switch out and make it when either of us had the time and it was no longer a big deal.

Make a thick Béchamel with sherry, roughly a cup and a half of sauce for each eight ounces of fish, and season with a little salt and white pepper. If snapper is unavailable, use flounder, tilapia or ocean perch. Add grated Swiss or Provolone cheese, chopped green onions, picked lump crabmeat and a splash of sherry (NOT “cooking sherry”) then chill; skin fillets if needed, score lightly on both sides and place on a shallow lightly buttered oven dish. Spoon the cooled sauce over the fillets and bake at a very high heat until sauce is bubbling and fish flakes easily in its thickest part. Serve with a dusting of paprika, a sprinkling of sliced almonds, lemon garnish, fresh bread and a wine of your choosing. 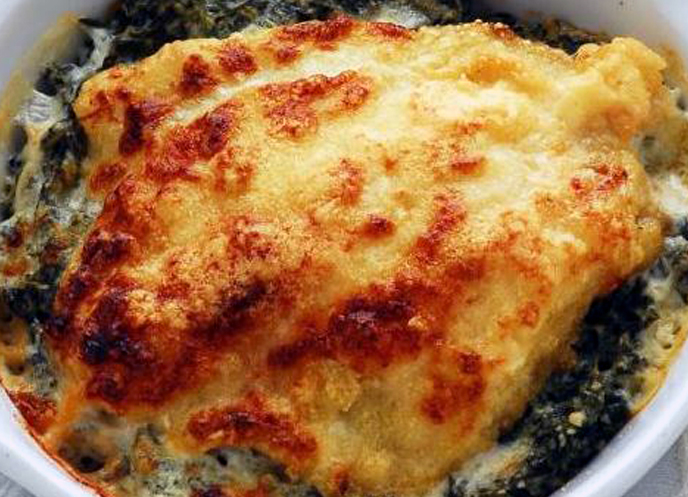