Among anglers along the Mississippi Gulf Coast, David Lee Odom is a legend. Fellow sportsman and neighbor Dan Vimes, noting Odom’s impressive knack for hooking the fish that Howard Mitcham called “the Gulf Coast’s own”, the speckled trout, calls him “the trout whisperer”. Odom himself says, “The quest for the elusive speckled trout is a salty coastal religion. Ask any inshore fisherman on the Mississippi coast if they could either catch a trophy marlin or a state record speckled trout there would be a unanimous answer and it ain’t marlin.”

Odom explains that “specks” actually are not a species of trout but a type of drum and a cousin to the redfish. The male specks make an audible drumming sound when caught. “There are two types of stubborn speck fisherman,” Odom said. “Those that only use artificial lures or those that rely on live bait and are too lazy to be chucking lures over and over and over. It divides us like some smelly civil war. My wife Kim and I are in the live bait camp: brown, white and pink shrimp directly from the Mississippi Sound are like candy to speckled trout.” 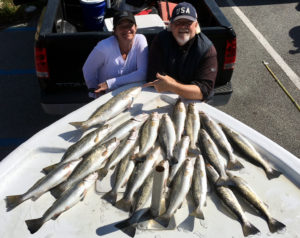 “If you are on the Mississippi coast in the winter and traveling over the Biloxi or Bay Saint Louis bridge look inland … the specks are in the river, and if it’s summer look out to the Mississippi Sound and know those tea-stained waters are chock full of schools of speckled trout waiting for you to catch them. From late April through early June specks transition from freshwater rivers into the salty Gulf of Mexico to spawn. This is when Kim and I try and fill the freezer with fresh filets.”

“Our strategy, like any saltwater fishermen, starts with knowing what the tide is going to do and heading out when the water is flowing the fastest. Our rig is simple: rod and reel, 15 lb. test fishing line and starting at the cork going down the leader length is adjusted to the depth of the water. 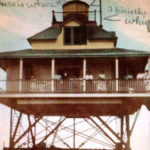 The leader material is a thicker line attached to the fishing line that is tougher to bite through and withstands the abrasions from oyster beds. If it’s rigged just right the shrimp is wearing a small treble hook for a hat and swims freely making a popping noise about a 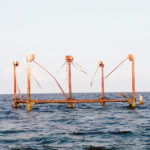 foot above the oyster reef as it drifts near the bottom. We fish the Pass Marianne Reef. It’s positioned 5 miles due south of the Pass Christian Harbor. Originally called the Merrill Shell Bank, the base of the old lighthouse built in the 1800’s still sits above the water and marks the spot for hundreds of anglers each year hoping to fill their coolers.”

“The flesh of speckled trout is prized because it doesn’t taste ‘fishy’. Freshness is the foundation for any recipe to prepare this delicate white meat fish, but it takes planning and work. If done just right the filets will have bright pink hue even 6 months after freezing. Once the fish is caught it’s immediately immersed in iced ocean salt water. This ensures clear eyes at the time the fish will be cleaned. The filets are thoroughly washed, blotted bone dry then vacuum sealed. We always save a few filets to eat before freezing. This is a Gulf-to-ice-to-plate freshness that only speck fisherman get to experience.”

“So how do my wife and I cook speckled trout? “Heat da grease!” Fried in corn flour (a.k.a. “fish fry”) to golden brown perfection leads the charge on our coast but fresh blackened speck tacos topped with seasonal with fresh seasonal salsas or hot fanny trout or are our preferred methods of preparation. Freshness allows for the simplest of ingredients, so let’s go with so let’s go with:

Take your fresh filets and brush them lightly with olive oil, sprinkle with a little salt and pepper, squeeze on some fresh lemon juice and broil till just firm. Heat 1/4 cup of Worcestershire, two tablespoons unsalted butter, the juice of a lemon and mix well. Then toast a handful of fresh chopped pecan halves in a skillet till dark brown and blister a fresh chopped jalapeño (seeded and deveined). Top the filets with the pecan/jalapeño mix and ladle on the sauce. A little more fresh-squeezed lemon never hurts. 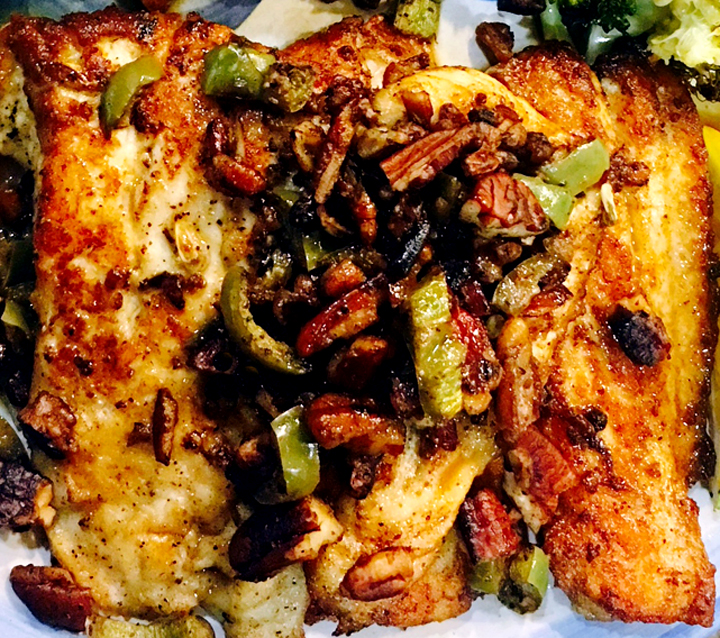 5 Replies to “The Trout Whisperer”