The following is an excerpt from Paul V. Canonici’s The Delta Italians, a two-volume work published by the author in 2013 that is “a compilation of stories and experiences of early Italian settlers in the Arkansas and Mississippi Delta. Some of the content is documented history, but most consists of bits and pieces of family stories that have survived the test of time and memory.” Those among you with a deep and abiding interest in the history of the Mississippi Delta would be well-advised to purchase a copy of Fr. Canonici’s work.

Salvadore Signa said in a 1976 interview that he was born in 1902 in a small shotgun house, St. Michael’s Parish, Louisiana, across the Mississippi River from Donaldsonville. His father Carmelo Signa worked in the sugar cane fields. When Salvador was still an infant, Carmelo moved his family to Vicksburg and worked in a fruit stand at the corner of Clay and Washington Streets. In 1912, when Salvador was ten years old, Carmelo Signa moved to Greenville and opened a grocery store at the corner of Hinds and Nelson Streets. The Signa family lived in a small house behind the store in a predominantly African-American neighborhood. 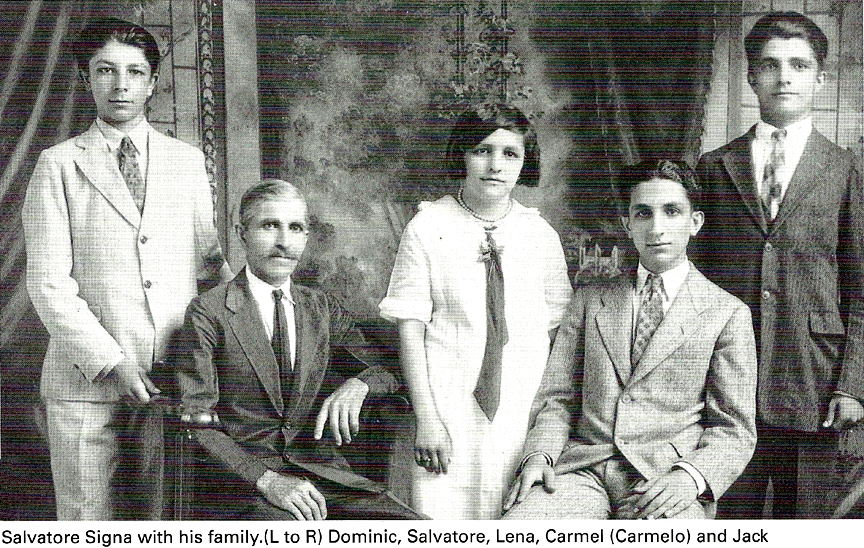 Carmelo Signa and his wife Mattea Maucelli had twelve children: Lena, Carmelo, Jr., Frances, Dominic E., Antonia, Josephine, Sarah, Paule, Rosalie, Frank, Santo and Lucille. Son Salvador had a career with the post office. Dominic work for the Corps of Engineers but on weekends off and off-time he joined his wife Mamie in helping out in his father’s business. “Papa’s Store”, as it was known, thrived in the community until 1927. That year the Great Flood pushed the Mississippi River out of its banks and consumed much of the riverside community that Papa’s Store was located in and depended on. The community around Nelson Street was eventually rebuilt. Carmelo decided to open a honky tonk in the front part of the store. The honky tonk became a popular gathering and entertainment place for the black community surrounding Nelson Street.

In the back of the old store there was a small kitchen where Carmelo’s son, Dominic “Big Doe” Signa and his wife Mamie prepared food such as buffalo fish, catfish and chili for patrons of the honky tonk. On weekends Dominic prepared meals for a group of professionals—doctors and lawyers—who got together and bought him a specially-made grill, and in 1941 someone gave Mamie a partial recipe for traditional Delta-style hot tamales. She improved on the recipe and began selling them at the honky tonk. This was the beginning of Doe’s Eat Place.

Big Doe relied on the help of family and friends to keep up with the demands of his thriving new restaurant. Eventually he closed down the honky tonk to expand and stay focused on the Eat Place. The added space allowed Big Doe and Mamie to prepare a full course meal for their patrons including Mamie’s marinated salad and fresh cut French fries prepared in a cast iron skillet. Despite the added space, the eat Place’s growing popularity never allowed for the dining tables to be removed from the kitchen where several remain to this day. Mamie passed away on November 5, 1955. Dig Doe Signa retired in 1974 and turned the Eat Place over to his sons Charles and Dominic “Little Doe” Signa. Dig Doe passed away on April 29, 1987.

Though time has taken its toll on the old building once known as Papa’s Store, the tradition of the family Eat Place hasn’t changed. Today, when you walk in the front door of the former honky tonk on Nelson Street, you’ll be greeted in the front kitchen where Little Doe cooks steaks for the locals, as well as travelers who have gone miles out of their way to make the pilgrimage to this icon of the South. He uses the same grill that was specially made for Big Doe. There’s nothing fancy about it. It’s simply good people carrying on the delicious Delta tradition of mouthwatering steaks and hot tamales.

34 Replies to “The Birth of Doe’s Eat Place”