Barbara Yancy took a great deal of pride in her table and was a superb cook, but like many (if not most) such people, she was an absolute tyrant in the kitchen (both characteristics she passed down to her daughter), demanding absolute obedience to instruction and perfection in results. Her Thanksgiving table was a symphony of flavor, and her crowning note, the one dish made at the last possible moment and brought to the table with a flourish once everyone was seated before the blessing, was her giblet gravy, which was only made for the holiday table and had to be done just so.

You must use a quart of the clearest, richest broth thickened while hot with a thin paste of corn starch and water. To this add the yolks of at least two eggs which have been creamed with a pat of butter. Then add two more chopped hard boiled eggs (yolks and whites), the cooked and chopped livers and gizzards of the turkey as well as the hen you used for your stock ( a half cup or so of each), but not the meat from the necks, which she considered superfluous as well as “messy-looking”. Salt to taste and season with white pepper.

I agree with mother about chicken neck meat, but when I add chopped green onions to my gravy, I can just hear her heavy sigh of disapproval.

Anyone who entrusts you with a family recipe loves you and will give you other instructions like, “Why don’t you get a job?” Such memories bind us all. Heirloom recipes should be treasured as records of home life that reflect the character of a people and a region. I’m always on the lookout for old recipes from family lines, for any dish not mentioned in that harangue of books and magazines devoted to Southern cuisine. Community cookbooks are a fine source of these recipes, but you can bet your bottom dollar that more than a few contributors are simply not going to share essential details because the church secretary was caught sleeping with her brother-in-law.

This holiday season I found a recipe that stands out: amalgamation cake. Yes, it’s a cake, but amalgamation is a word you usually stumble on in cookery works by dreary academic organizations devoted to foodways. I first heard it mentioned from a friend in Tupelo; queries to others brought about a dozen responses, all of them indicating that the amalgamation cake originated from northeast Mississippi and adjacent Alabama. I felt smug about isolating a true north Mississippi heirloom when someone popped up and pointed out that Ferrol Sams mentions amalgamation cake, “And he’s from Georgia.” Recipes also hail from northwest Tennessee, western South Carolina and a bundt from Florida that seems way off all maps, but they are few. No mention is made of amalgamation cake in “Southern Living”, not in any of Quail Ridge Press’ “Best of the Bests” series, nor in any of my Jackson cookbooks. It is in The Mississippi Cookbook, published by the Mississippi Cooperative Extension Service in 1972, confirming that amalgamation cake is a rural tradition.

Research on the origins of this recipe became a grail quest for me, but as Janet Clarkson (“The Old Foodie”) claims, it’s impossible to cite the first source for any recipe, since none are completely new. “Meringues were made for centuries before somebody called one a pavlova,” and at best we can only give the first known written or published version. When it comes to the amalgamation cake the earliest recipe I have found is handwritten from Itawamba County in 1939, sent to me by Bob Franks in Fulton. Recipes for amalgamation cake are jealously guarded in families, passed down and shared only with close friends and relatives. True to form, every recipe I received came with stringent instructions to follow; those who shared recipes with me said if I didn’t use fresh coconut that I would die and go to a deeper level of hell. They all told me to get a job, too.

Amalgamation cake is always made for Christmas, and is similar to Alabama’s Lane cake, made famous by its mention in To Kill a Mockingbird. The Lane cake was created by Emma Lane of Clayton, Alabama who published her recipe in 1898. Most recipes for both cakes result in layers of white sponge cake with a filling of raisins, pecans, and coconut. The main difference between a Lane cake, which has it, and an amalgamation cake, which doesn’t, is liquor. The Lane cake, like its cousin the Lady Baltimore, is always infused with bourbon or some such, while the sober amalgamation abstains from spirits. The sole exception to this rule is a recipe from my home county (“Vote dry and drink wet!”) Calhoun, which calls for a sweet wine wrap overnight. The following recipe was published in The Tuscaloosa News, Nov. 2011, from Billie Ruth Armstrong Moore, a student in the Osher Lifelong Learning Institute’s “Preserving Your Family History” class. Asked to bring in a family recipe and write about it, she wrote:

Granny’s Amalgamation Cake was a favorite dessert at Thanksgiving and Christmas which our extended Armstrong family always celebrated at the home of my grandmother, Georgia Elizabeth Shumpert Armstrong. Her home was located near the Evergreen Community which is in the southwest corner of Itawamba County, Mississippi. 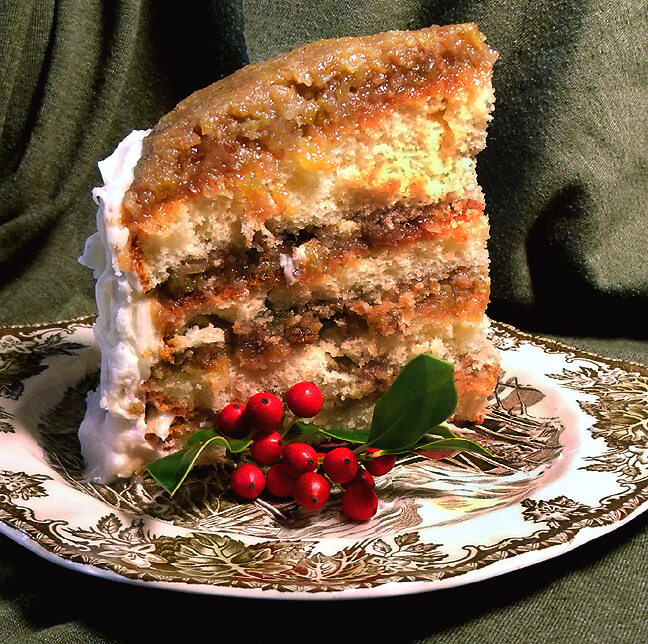