What compels writers of great works for adults to write for children? For whatever reason, many do, and some titles are familiar: C.S. Lewis’ Narnia series, Tolkien’s The Hobbit, E.B. White’s Charlotte’s Web, and T.S. Eliot wrote a series of whimsical poems published under the title Old Possum’s Book of Practical Cats, a childhood favorite of composer Andrew Lloyd Webber.

More obscure are Joyce’s, The Cat and the Devil, Twain’s, Advice to Little Girls, Woolf’s, The Widow and the Parrot, Mary Shelley’s The Fisher’s Cot, and then we have these little-known children’s books by two of Mississippi’s brightest literary lights; Welty’s The Shoe Bird and Faulkner’s The Wishing Tree. 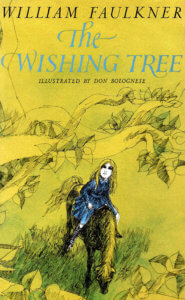 In 1927, Faulkner gave the story that was to become The Wishing Tree to Victoria “Cho-Cho” Franklin, the daughter of his childhood sweetheart, Estelle Oldham. Faulkner was still infatuated with Estelle and had hopes of her leaving her current husband and marrying him, which she did in 1929. Faulkner typed the book on colored paper, bound it himself and included a lyrical dedication:

Ah, let this fade: it doth and must; nor grieve,
Dream ever, though; she ever young and fair.’

But Faulkner made copies for three other children as well and when Victoria tried to publish the book decades later, copyright had to be worked out between the four. In 1964, Faulkner’s granddaughter Victoria, Cho-Cho’s daughter, got Random House to publish a limited edition of 500 numbered copies, featuring black-and-white illustrations by artist Don Bolognese. 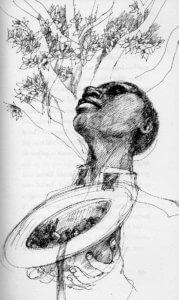 The Wishing Tree is a grimly whimsical morality tale, somewhere between Alice In Wonderland and To Kill a Mockingbird. Dulcie, a young girl, wakes on her birthday to find a mysterious red-haired boy in her room who whisks her, the other children, the maid Alice, and a 92-year old man through a “soft wisteria scented mist” to find the Wishing Tree. They wish, and they unwish, and at the end they meet St. Francis who gives them each a bird–a little winged thought.  The Wishing Tree is about the importance of choosing one’s wishes with consideration. “If you are kind to helpless things, you don’t need a Wishing Tree to make things come true.”

On April 8, 1967, a version of the story appeared in The Saturday Evening Post. Three days later, Random House released a regular edition, which went through three printings that year alone and no more. The book is now regarded as a literary curio from the man who put an Ole Miss coed in a cathouse in Memphis. 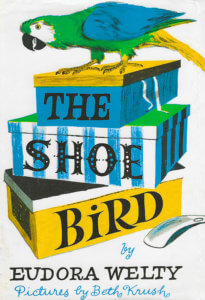 Eudora Welty finished what was to become The Shoe Bird in 1963 under the working title Pepe to fulfill a contractual obligation to Harcourt Brace—and to put a new roof on her house. She sent the final draft to Diarmund Russell in March, and he was enthusiastic: “totally charming—something all ages can read.” Eudora readied what was now entitled The Shoe Bird for publication in early 1964 with illustrations by Beth Krush, dedicating it to Bill and Emmy Maxwell’s daughters, Kate and Brookie.

The Shoe Bird is Arturo, a parrot who works in The Friendly Shoe Store “in a shopping center in the middle of the U.S.A.,” helping Mr. Friendly greet customers and bringing him a match for his end-of-the-day pipe. Arturo’s motto is: If you hear it, tell it. One day, a little boy who was leaving the store said, “Shoes are for the birds!” and after the store had closed Arturo, true to his motto, repeats the phrase and all the birds in the world—including a dodo and a phoenix—gather at the shoe store to be fitted for shoes. The Shoe Bird is a nice little story with lots of puns, but it’s heavy-handed with the moral of speaking for oneself instead of just repeating what others say. 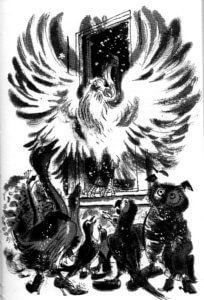 Reviews in adult publications were “cordial but restrained,” while reception among children’s literature commentators was either negative or—as in the case of the influential Horn Book, nonexistent. Kirkus Reviews described the novel as uneventful and concludes: “the overly wordy result is so obscure that readers are likely to want to leave dictionaries as well as shoes to the birds.” An orchestral ballet was composed by Welty’s friend Lehman Engel and performed by the Jackson Ballet Guild in 1968. A 2002 choral piece was also commissioned by the Mississippi Boy Choir and composed by Samuel Jones.

As to what compels a writer to write for children, can it ever be as simple as to win over a childhood sweetheart, or to roof a house? It’s never that simple, and it’s not that easy.