Nowadays most discussions—more often polemics—about culinary authenticity involve terms such as “the salience of ethnic identity” and “aligning broader socio-political representations”. These investigations certainly have their place in this global franchise we call a world, but when it comes to a specific restaurant recipe, we’re on less esoteric footing. We know that at some point in time, at this particular place, a recipe was formulated, prepared and served, a recipe that became an archetype for any that followed, and our best means of replicating such dishes is to find recipes written by people who are thoroughly familiar with the original and have the wherewithal to replicate it with authority.

Such is the case with Arnaud’s signature recipe for oysters Bienville in Bayou Cuisine that’s credited to Jackson restaurateur Paul Crechale. This recipe rings with authenticity and authority. Note the use of a beige roux to thicken, cream and egg yolks to enrich, mushrooms, shrimp and a hard dry cheese for substance.

Prepare the sauce by browning lightly in 3 tablespoons butter 2 minced onions. Stir in 3 tablespoons flour and cook, stirring constantly until the mixture is lightly browned. Be sure not to let it burn. Add gradually 1 ½ cups chicken consommé, ½ cup white wine, 1 cup minced raw mushrooms and 1 ½ cups chopped cooked shrimp. Cook slowly, stirring constantly, for 10 minutes. Open 3 dozen oysters and put them in their deep shells (my italics, jly) on individual baking dishes. Bake the oysters in their own juices in a moderate oven (350) for about 6 minutes. Thicken sauce with 2 egg yolks beaten with 2 tablespoons heavy cream and heat the sauce without boiling. Cover each oyster with some of the sauce and sprinkle lightly with equal parts of dry bread crumbs and grated Parmesan or Romano cheese. Return the oysters to the oven for about 10 minutes, until the topping is browned. 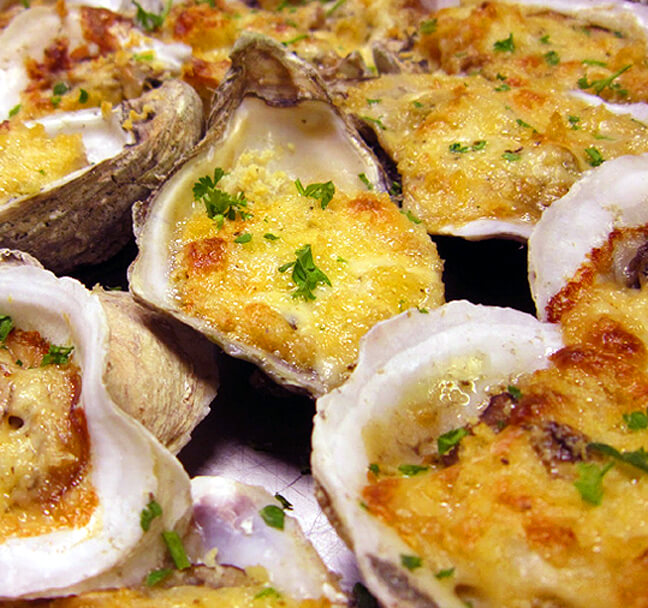 One Reply to “Paul Crechale’s Bienville”