I always thought it a very cool thing to be able to say that GlennRay Tutor, Glenn Ballard, and I took a writing workshop together in the summer of ’74. Indeed, so far as I know, it was the only writing class any of us ever took. There were other good students whose names I do not recall, but wish I could. Neither can I bring to mind the least remnant of what I learned in that class. The professor, however, was unforgettable.

He was a devilishly handsome man, funny and kind, and he seemed to know everything. Simply everything. He could summon a quote from the ether anytime he wanted. He read beautifully, both poetry and prose, and read as if the poet or writer were his best friend in all the world. He had written an actual novel (we didn’t know then about the ones he would always dismiss as “drugstore paperbacks”) published by an actual New York City house, and his short stories had appeared in actual magazines, and we boys looked on these accomplishments as commensurate with raising the dead. Nevertheless, he was humble in the presence of great writers, and treated even our sophomoric maunderings with delicacy and respect. More important, he practiced humility toward his own prodigious talent.

Our professor smoked a pipe, as all professors ought, and as most did in those vanished days. Over the years, I took every course he offered, and his routine never varied: he would arrive with his pipe and tobacco pouch and a thermos of coffee, greet everyone, open whatever book we were using, and commence to be brilliant. (He had a Nimrod Sportsman pipe lighter–the kind advertised in Field & Stream–and his old students will smile when I recall the image of that good man flicking his lighter and stoking his pipe and pouring a cup of coffee all at the same time.) He never used notes, and hardly ever wrote on the blackboard. Had there been Power Point then (God forbid!), he would have scorned it. Neither did he waste time with films or slides. He just talked, and read, and revealed the magical realm of literature to us.

Those who remember this excellent professor will be interested to know that, at long last, his life and contributions are contained in a biography: Living in Mississippi: The Life and Times of Evans Harrington (UP of Mississippi, 2017). Author and scholar Robert Hamblin knew Dr. Harrington as friend and colleague; he has drawn on that relationship, on a wide range of interviews, and on careful research to present as complete a portrait of the man as we are ever likely to have.

And what a man he was! Evans Harrington was born in Birmingham of parents who were conservative both in religion (his father, Silas, was a Baptist minister) and politics–which is to say that the elder Harringtons were Southerners of their time and generation. When Evans was three, the family moved to Mississippi, and there they remained. Young Evans grew up in the rural South of the ‘20s and ‘30s, a culture which shaped him in many ways. Harrington loved the Southern landscape; he was a skilled hunter and fisherman; he knew what it meant to work hard; he was schooled in the Bible and old-time religion; he was as mannerly and courtly and brave as any character in Swallow Barn. At the same time, he grew to manhood in a time when change was on the horizon. Like many thoughtful Southerners before him, Harrington was exposed to unexpected, often uncomfortable, insights when he left the South and joined the service in 1943. For the first time, he encountered young men from the North and West who owned different ways of thinking; when called upon to explain his region’s unique qualities, Harrington, like Quentin Compson at Harvard, discovered he could not defend many cultural elements he had taken for granted. In an interview, Harrington admitted that, by the time of his discharge in 1945, he was “already an integrationist and a defender of the blacks.”

Throughout his adult life, Evans Harrington was a champion of equal rights, not only for blacks, but for all persons protected by the United States Constitution–and this at a time when such notions might cost a Southern man his life. Nevertheless, he refused to follow many of his educated, like-minded contemporaries (including William Faulkner) in their exodus to more “enlightened” areas of the country. Hamblin takes his biography’s title from the essay “Living in Mississippi” (Yale Review, June, 1968), in which Harrington defines the extraordinary dilemma of one who insists on loving his native land in spite of itself. Harrington remained in the state he loved; throughout the tumultuous civil rights era, he fought, with ardor and passion, often at his own peril, and at considerable personal cost, for what he believed to be the only decent, humane, and just relationship among human beings.

Among the many virtues of Hamblin’s book is the decision to present different elements of his subject’s history–biographical, political, academic, and literary–as independent sections. A departure from traditional biography, Hamblin’s technique offers clarity and focus, though not at the expense of the narrative as a whole.

It well may be that Robert Hamblin’s outstanding work will find but a limited audience, since Evans Harrington’s is not exactly a household name, and it is unlikely Hamblin will make it one. This is a very great pity, for Dr. Harrington’s life would inspire anyone who values courage, honor, and the rare quality of thinking for oneself, especially when it challenges the entrenched world view of a conservative society. In any event, those lucky enough to have known Dr. Harrington will find this book a treasure indeed.

Having begun this review on a personal note, I will end it in the same fashion. I never saw eye-to-eye with our good professor on certain points of his philosophy. I continue to believe liberal thinkers of his era embraced an ideology that, while admirable, was wholly impractical. They were naïve in the sense that all are naïve who cannot imagine the unimaginable future, a fault shared by every person who ever lived. On the other hand, without idealists like Dr. Harrington, our flawed humanity would never improve, never move toward kindness and justice and mercy. We are intractable until we see our image in the mirror of history, held up to us by brave men like Dr. Harrington.

By the way, when we at last discovered the Doc had written novels under a pen name, we implored him to reveal it. Finally, one day, he did. “It’s Jacqueline Suzanne,” he said.

Thank you, Dr. Harrington. Well done, sir. May you rest in peace. 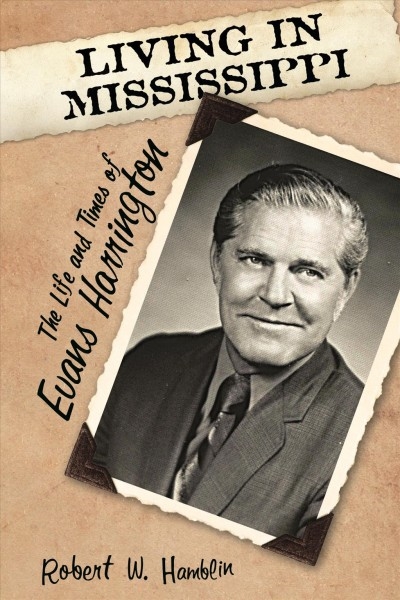 4 Replies to ““Living in Mississippi: The Life and Times of Evans Harrington”, a review by Howard Bahr”