In the mid-80s, I moved from north Mississippi, where I’d spent my entire life, to north Florida, where nobody spends an entire life. I caught total hell. I mean, I caught hell from people who didn’t even know where their grandparents were buried.

Part of the problem, of course, was the fact that I attached some degree of importance to such things as knowing where your grandparents—and ancestors beyond—had been laid to rest. I also suffered by being the only Rebel fan in a swamp full of Florida Gators. Believe it or not, most of these people didn’t even know what I meant when I said “Ole Miss.” Instead, they referred to it as “Mississippi.” That’s within bounds, of course, but it just doesn’t have the same cachet.

For another thing, I was a pacifist liberal in an area largely supported by military funding during the middle of the Reagan Era. My Dukakis campaign button brought down a rain of derision upon me, but I wore it defiantly. Finally, to add insult to injury, I’d only been there a little over a year when Alan Parker comes out with this damnatory film about one the darkest chapters of my home state’s history, Mississippi Burning. The impression these people got from the film was that everybody in Mississippi is an ignorant racist just itching to get their hands on some out-of-staters to help shore up our levees.

This conception was reinforced on at least one occasion that I can remember. At the restaurant I worked in, we offered a fish of the day. The offering varied, depending upon what the fleet from Destin brought in and what they charged for their catch. More often than not, however, the fish of the day was amberjack. Now, amberjack is a perfectly good fish, but large amberjack—those over 15 pounds or so—are heavily parasitized by a tapeworm, Poecilancistrium caryophyllum, more commonly known as spaghetti worms The larvae infest the flesh of these large fish, and when you dress them, you have to be careful to remove the parasites. The worms have bulbous heads and long, skinny bodies and they’re all coiled up in the flesh and you have to . . .  well, I’ll leave it at that. It’s pretty disgusting. We were always careful to clean the fish fastidiously before we served it. But some people won’t eat amberjack—or speckled trout, which sometimes have the same problem—for that reason.

Well, I was working in the kitchen one morning with a waitress with whom I had what you could only call a difficult relationship. She was a world-class bitch, and I grew to love her dearly, but at this point I was still coming to appreciate her derisive wit. So when she stormed in, marched up to me and said, “Let me tell you what I think about you damned Mississippians!” I knew I was in for it through no fault of my own, so I just stood there while she let me have it. She had just waited on a table composed of a man from the Mississippi Coast and his wife. He asked her about the fish of the day, and when she told him it was amberjack, he said, “Amberjack! Why, only niggers eat amberjack!”

She was pissed, and rightly so. Oddly enough, though, this incident proved to be a turning point in our relationship, because I assured her that I was just as appalled as she was and dismayed to boot that she had to put up with such a display of rudeness and bigotry. I like to believe that despite my abundant flaws as a human being I was a good ambassador for my home state during my tenure on the Redneck Riviera. I made some good friends there, and though we’ve long since gone our separate ways, I still remember my time in Florida with varying degrees of fondness. It was there that my education on cooking fish and seafood really took off, if for no other reason than for the fact that I had so much to cook and experiment with.

Proceed as with any potato soup recipe, using half the potatoes and substituting fish stock (if you have it) for half the liquid. When soup is to consistency, stir in lightly poached amberjack and sautéed sweet peppers. Add a dash or so of cayenne, fresh parsley, a hint of dill and the juice of half a lemon. Adjust for consistency; I like mine rather thick. You can add cooked shrimp to this if you like, and it’s also good cold. 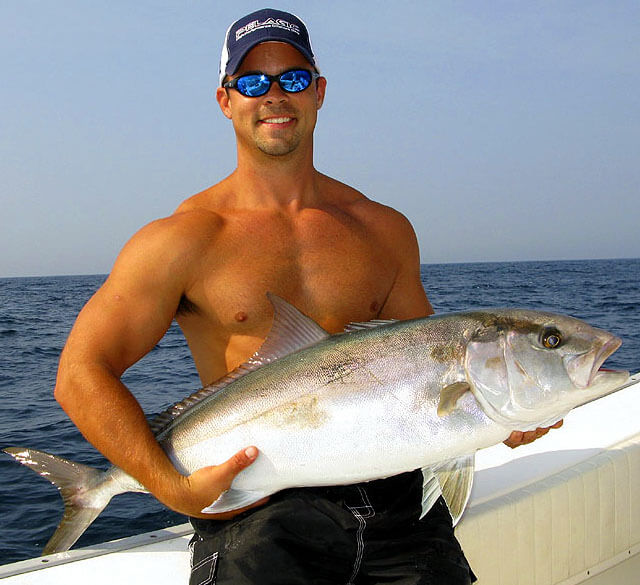