When it comes to food, love can exert a formidable influence. If you aren’t, like, totally spiritual, sex, the attraction if not the action, is probably the initial ingredient for a romance, but after that, sooner or later you’re going to have to eat together, and dining with one another can be as exhilarating and educational as sex the action. Discovery can be breathtaking, but it requires an open mind.

As such, it’s entirely possible that someone who loves greasy stuffed cabbage can learn from a lover how to adore creamy stuffed pasta, or vice versa. But dealing with extremes can be hazardous: a friend of mine who is a self-professed carnivore from way back once fell for this little slip of a girl who did not eat meat, so he sold off a custom-made barbecue grill and turned down his mother’s meat loaf. Twice. Even now, six years after his slip ran off with a zither player from Utah, his mom still brings it up. (Be advised: unconditional love doesn’t apply when it comes to meat loaf.)

It’s not that the entire process of learning to live together isn’t educational as a whole; it’s just that food has the potential to be a more fundamental source of friction than ugly underwear or nasal hair. For those among us with discriminating dietary habits, it’s a safe bet that if you meet someone special in a natural foods dive, they’ll feel much the same way about pork roast as you do (which is not to say that soy products might not eventually become a bone of contention). But if you meet a mate in a bar that serves hamburgers and patriot fries, well, you’re just wide open for surprises, and if simply adjusting to eating together isn’t enough, learning to cook in the same place can be heartaching as well: formerly favored cookware might be set aside to make room for an exotic batterie. That rooster roaster you were once so proud of might find itself set so far back in a cabinet that you might never lay eyes on it again. Condiments are always controversial.

You might also, as I did, find your palate challenged in totally unexpected ways, as when a housemate sought to seduce me with something novel and exciting in the form of a carrot omelet. Fortunately, omelets are quite versatile; you can put damn near anything in them, though I will admit that carrots initially struck me as an unlikely ingredient. After all, most omelets are served as savory rather than as sweet dishes, and carrots are among those vegetables I place on the sweet side.

Now, you can make a carrot omelet such as I was served, where the shredded carrots were sautéed in a little butter with green onions and a hint of garlic before being added to the egg mixture, and it would be edible. But if I had been told that carrots were the only ingredient we had for an omelet (as it turned out, they weren’t; I later discovered a bar of cheddar in the butter tray), I might have suggested another recipe.

Dessert omelets are novelties nowadays, but anyone who has poured syrup over scrambled eggs can attest to their appeal. Sugar (a little less than two tablespoons) is added to two large beaten eggs and a teaspoon of water. While a bit of water is standard for most omelets, the added sugar makes for a nice caramel-type crust. Separate one egg white and whip until stiff before folding it into the mix, but before you make your omelet á la Crécy, make candied carrots.

For two people: trim, scrub and peel two carrots, slice on the bias, barely cover in simple syrup made with honey or brown sugar, simmer with three cloves and a pat of butter until the liquid is reduced and the carrots are done through. Remove the cloves and use these carrots as you would any omelet filling; a classicist would puree them, but I don’t. Sprinkle with powdered sugar, serve with a tempest in a teapot. 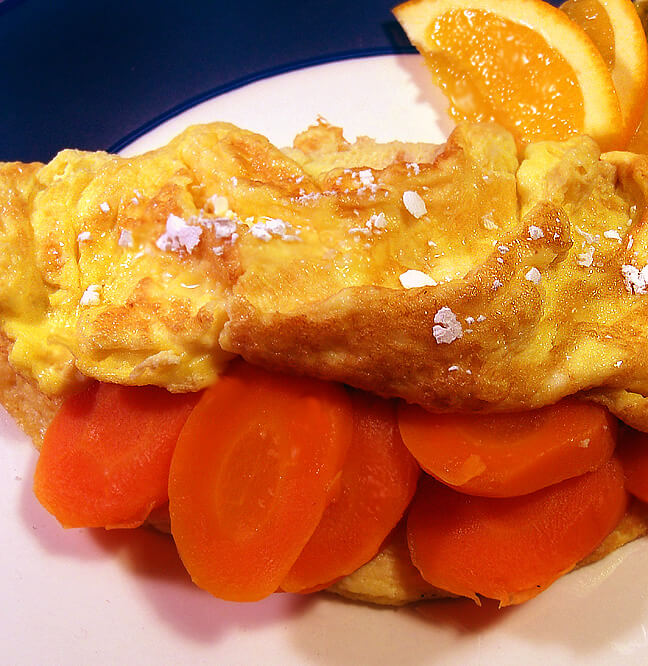