Within living memory, there was a time when commercial products and establishments went a long way to convince consumers that their products were “Just like!” if not “Better than!” homemade. This marketing was still going on when I was a kid in the Sixties even though for the most part Baby Boomers were a generation removed from true home cooking, by which I mean cooking that largely involved fresh (unprocessed) dairy, meats and produce. While “homemade” is making a comeback as a marketing tag thanks to a resurgence of what I like to call the “Whole Earth” attitude—God bless Stewart Brand and all who sail in him—there’s a counter-movement in marketing based on selling products that are the very antithesis of homemade, meaning those developed specifically for restaurant franchises. And while you can buy selected products from Starbucks, Taco Bell and TGI Friday’s, you’re not going to find specialty items such as McDonald’s “special sauce” for a Big Mac.

It’s only logical that recipes for successful restaurant recipes are a closely-guarded secret. As a child, I knew a woman who claimed to know the Sanders’ Original Recipe of “11 herbs and spices”, one of the most famous trade secrets in the catering industry, by virtue of the fact that she had worked in a franchise outlet in Grenada, Mississippi for three months while her husband was in the Grenada County lock-up for beating up a grease monkey who’d stolen a gun from the glove compartment of his car while it was in for an oil change. She didn’t really know it, of course; her fried chicken tasted nothing like it, though perhaps it might have to her after her daily bottle of vodka. It wasn’t until August 2016 that the recipe was made public when the Chicago Tribune reported that a nephew by marriage of Colonel Sanders, had claimed to have found a copy of the original KFC fried chicken recipe on a handwritten piece of paper in an envelope in a scrapbook.

As journalists of fortitude and integrity, Tribune staffers verified the recipe before publication, and after “some trial and error” they decided the chicken should be soaked in buttermilk and coated once in the following breading mixture, then fried in oil at 350 degrees Fahrenheit until golden brown. With the addition of MSG (in an unspecified amount) they claimed the recipe produced fried chicken “indistinguishable” from fried chicken they had purchased at KFC.

While the KFC empire, which includes some 23 thousand restaurants worldwide with major markets in China (4,563 units), the United States (4,491 units), Japan (1,181 units), the United Kingdom (900 units) and South Africa (736 units), is built upon fried chicken, many people consider the appurtenances: biscuits, mashed potatoes with gravy, green beans, etc. essential to the KFC experience. And one of those essentials is cole slaw, which, after a considerable digression, leads me back to copycat recipes.

If you are lucky enough to have a food processor, get it out of your cupboard. Start to cut up the cabbage and place it in the processor. While cutting up the cabbage, also cut up small slices of green pepper, onion, and carrot and add to the processor. Mixing up the ingredients this way will help distribute the flavors throughout the slaw. You may want to use a little less of the onion, or green bell pepper, but do use all of the carrot. If you do not have a food processor, no problem, simply chop the cabbage, onions, and carrots into small pieces.  Add chopped green bell pepper if desired. Now mix Miracle Whip, vinegar, oil, and sugar until you have a smooth mixture. The taste should be sweet with just a hint of vinegar. The amount of dressing may be increased or decreased according to the amount of slaw you are making. Add to cut up veggies and mix well. Let stand at least one hour to let flavors mix. 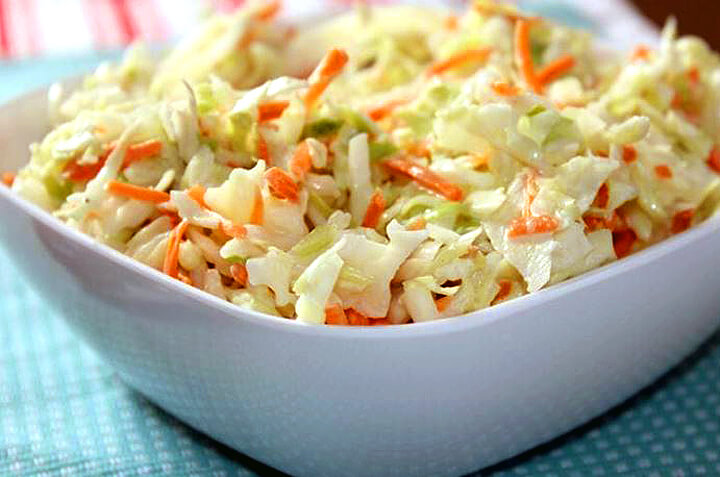