Shakespeare has it that among the many wiles Cleopatra cast in her seduction of Marc Anthony were “melons lush in flavor, firm and sweet, newly-plucked from the narrows of the Nile.” Cleo’s melons changed the course of history, but the fruits have enraptured mankind far before the last Ptolemy wrought havoc among the Romans.

Melons, along with other indispensable things such as coffee, algebra, tulips and zero, came to us through the Middle East, whose cultures, at peace or at war, have always served as a disseminating platform for goods and ideas between East and West. Here in the South, two melons – watermelon and cantaloupe – are queens; both have ripened on the banks of the Nile for over five thousand years—the watermelon from West Africa (Benin seems to be ground zero for the fruit and muskmelons from the opposite direction, Persia—and they thrive on the banks of the Mississippi as well.

While you can buy watermelons year-round, it’s just not a good idea to purchase a melon in the winter. Chances are, these melons are the tail-end of a second-field crop from Central America and will look and taste like pink cucumber. As a general rule of thumb, melon season in the American South corresponds quite neatly with our hurricane season, which you can remember with this rhyme:

June: Too soon!
July: Stand by!
August: Look out you must!
September: Remember!
October: All over!

I’ve jumped the gun and gotten decent melons at the tail end of May and I’ve even had a few November melons from the Missouri bootheel that were really good, but June through October is when melons are at their best, with August the peak month.

It’s also not a good idea to buy seedless watermelons because watermelon seeds release an enzyme that promotes the ripening process. You’ll find people who’ll tell you a seedless watermelon can taste just as good as one with seeds, but in my personal experience this simply does not hold true.

Cantaloupes, like all smaller melons, should be on the soft side of firm and aromatic. The blossom end of a ripe cantaloupe should give slightly and the fruit itself should be yellowish between the mesh and — since they are a type of muskmelon — have a fairly strong odor. Watermelon should be served chilled, but cantaloupe (along with all muskmelons such as honeydew, Santa Claus, casaba and the rest) should be served at room temperature. Both types benefit from a salty accent, but instead of salting, try this: 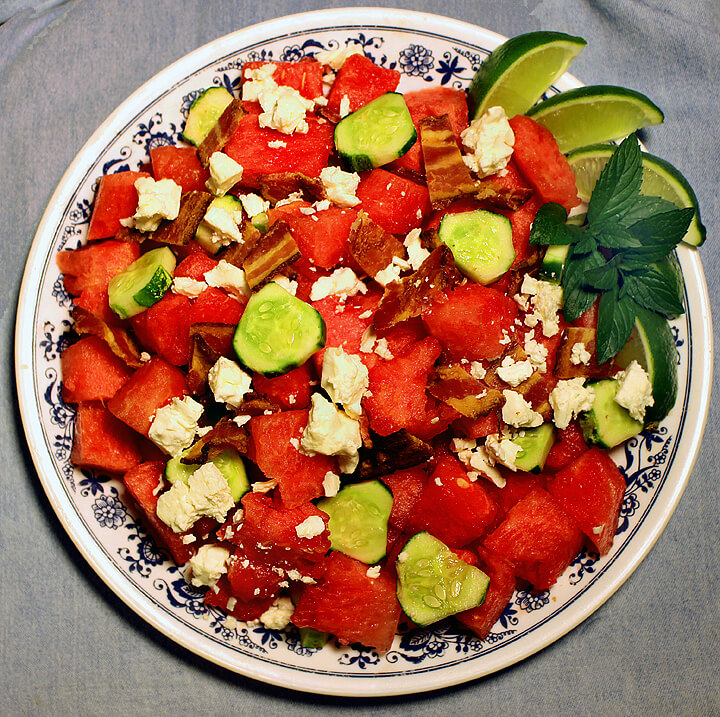