If chili were an authentic Mexican dish, then white chili would be fraught with as much ethnic tension white American cheese. But as any Mexican will tell you, chili is an American concoction, more specifically Texan. Any Texan will not only tell you that chili is a Texas dish, but he’ll also elaborate at length and in considerable detail on the proper way to make a great bowl of red. He’ll also likely denounce white chili as the grotesque brainchild of some East Coast chef manqué, though it’s more likely a dish from the Nebraska State Fair that somehow made it into Ladies’ Home Journal and from there to bourgeoise kitchens across the country.

Many people don’t even consider white chili to be chili in the first place, saying it’s nothing more than chicken and bean soup with cumin and oregano, peppers (albeit chili peppers), white beans and chicken, but I’d be one to argue that white chili is indeed chili because of the cumin. While cumin has varied uses all around the globe, in my part of the world, using cumin invariably involves a chili recipe. And yes, chicken. Let’s settle this once and for all: pork is not “the other white meat”. Arguably, you can use turkey in white chili; some people will tell you it’s more “authentic” turkeys being native to Texas. (Go ahead and roll your eyes. I did.) If you’re a segregationist, you’ll only use breast meat.

While it’s not as robust and certainly lacks the cachet if not to say mystique of Texas red, white chili is a great dish any cold night. For six generous servings, cube about a pound of boneless chicken breasts, and cook until done through with one large white onion chopped, a couple of cloves of garlic, minced (or to taste), two thin-skinned mild peppers (I use poblanos) diced. Add an 8 oz. can diced green peppers, two 15 oz. cans of great northern or navy beans and two cups chicken broth. Season with about a tablespoon ground cumin, a teaspoon dried oregano and white pepper to taste. Some people would add basil, but don’t. Cook on low heat, stirring occasionally, until you get a good, thick consistency. You shouldn’t have to add any thickener; the starch from the beans should do the job. And for Pete’s sake, DO NOT add any dairy. Serve with a good bread: not rice, not pasta, but bread, preferably warm and crusty. Cornbread is fine, yes. 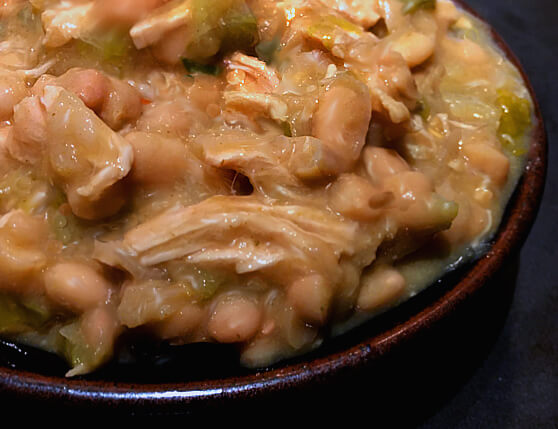