Southerners in general and Mississippians in particular carry a certain je ne sais quoi in their cultural and personal baggage, a conflict between their point of embarkation and point of destination. If we are lucky we reach inner peace with it, which is often enough an epiphany. When I was in my 20s, I was on Corsica on the verandah of a villa, the warm Mediterranean breeze blowing across Tizzano Bay, its famous tache bleue spectacular in the moonlight.

I was the guest of honor at a dinner a retired French admiral was hosting to show his gratitude for my work translating and documenting the Holocaust memoirs of a member of Walenberg’s resistance in Hungary. He had himself been a member of the French resistance as a young man and my author was a friend of his and also guest at the dinner. I was fielding questions being asked me in various languages. The left-handed compliments that I was not a typical American let me know I was speaking well for my homeland. Then, one of the guests wanted to know from where in America I hailed.

“Mississippi,” I said, and braced myself; after all, our not entirely undeserved bad reputation precedes us even abroad.
“Ah,” says the admiral. “The home of Faulkner. Are you familiar with Faulkner?”
“Yes, sir. He’s one of my favorite authors. My hometown is a few miles south of Oxford, and my great-grandfather served in the Civil War with Faulkner’s grandfather.”
“Then you speak the language of his characters?” He used the word “idiome,” not “langue” or “langage”.
“Yes, sir.”
“I consider Faulkner to be perhaps the greatest writer of the 20th Century. I’ve read him in French translation and in the English original. But I know there’s something I keep missing that’s bound up in the language (idiome) of his people. You’re the first person I’ve ever met who speaks it. Would you do me the honor of reading me some passages?”

One of his choices was from Chapter 7 of Intruder in the Dust. I channeled my inner Mick. My mind went back to the hills of North Mississippi. I could feel the heavy August sunlight and the dust of a backroad on my sweaty neck. This was a passage that, from the first time I read it, had been my own thoughts, a passage I had returned to over and over whenever contemplating exactly what it was that made me a Southerner.

“…the uttermost rim of the earth itself, the North: not north, but North, outland and circumscribing and not even a geographical place but an emotional idea, a condition of which he had fed from his mother’s milk to be ever and constant on the alert not at all to fear and not actually any more to hate but just—a little wearily sometimes and sometimes even with tongue in cheek—to defy.”

The air of international sophistication was soon swept away by the wind of time. I returned to my roots and laughed too loudly, in typically American fashion.
“How did you become a linguist?” he asked.
“It began on a possum hunt …”

And it did. I was nine when Uncle Ralph and my granddaddy decided it was time for the rite of passage of my people, the chase of Didelphis virginiana. First, I was instructed in the proper way of catching it, cleaning it out, and how to cook it, turnip up the derrière. A possum will eat damn near anything, and you have to take the possum alive and keep it caged for a couple of weeks, feeding it nothing but grains, making it kosher if you will. The neighbor man was brought in to keep, slaughter and cook it; Granny wasn’t about to let us into her kitchen with that!

So, off we went into the Mississippi moonshine-laced night, Granddaddy, Uncle Ralph, the neighbor man, the student, and the baying hounds. The quarry treed, I received the honor of knocking him from the limb. Or her; I never checked, but I did learn that the female American marsupial has two vaginae, the male a forked penis; the female initiates copulation, and if she doesn’t like it, she castrates him. This latter was emphasized as an important curriculum objective.

Our possum played possum as we took it back home. Along the way, Granddaddy recited from memory that great folk poem from his day, Carmen Possum, an instructional narrative poem about two boys and their dog hunting raccoon or possum at night in a mélange of Latin and English, part of which I include below. I was in awe. The next day Granny and Mama began my Latin studies which, in turn, set me on my career as a linguist. Looking back, I’ve often wondered how many young people these days are subject to such a random ray of light that brings about an unquenchable thirst for knowledge that will lead them far from home to distant lands under another moon.

The nox was lit by lux of Luna,
And ’twas a nox most opportuna
To catch a possum or a coona;
For nix was scattered o’er this mundus,
A shallow nix, et non profundus.
On sic a nox with canis unus,
Two boys went out to hunt for coonus.

… on this nixy moonlight night
This old canis did just right.
Nunquam chased a starving rattus,
Nunquam treed a starving cattus,
But sucurrit on, intentus
On the track and on the scentus,
Till he trees a possum strongum,
In a hollow trunkum longum.
Loud he barked in horrid bellum,
Seemed on terra vehit pellum.
Quickly ran the duo puer
Mors of possum to secure.

Nunc a domum narrent story,
Plenus sanguine, tragic, gory.
Pater praiseth, likewise mater,
Wonders greatly younger frater.
Possum leave they on the mundus,
Go themselves to sleep profundus,
Somniunt possums slain in battle,
Strong as ursae, large as cattle.
When nox gives way to lux of morning,
Albam terram much adorning,
Up they jump to see the varmin,
Of the which this is the carmen.
Lo! possum est resurrectum! 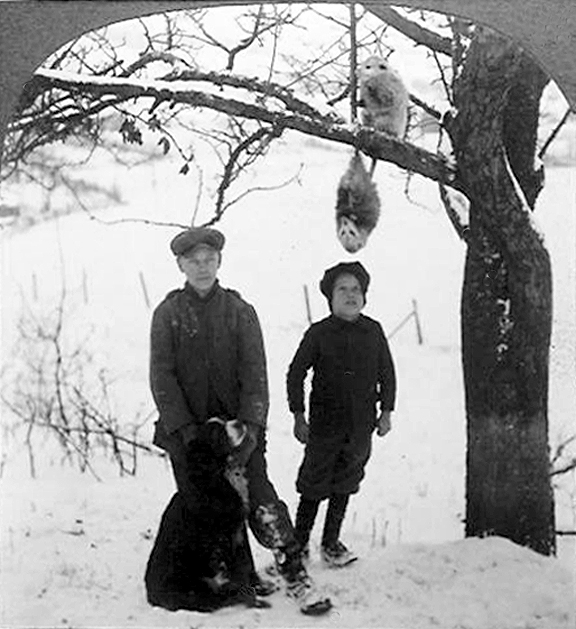