At the local grocery the other day I was on the dollar aisle (where I spend a lot of time), and the store manager, a great guy, walked up, grabbed a box of Larry the Cable Guy’s Lasagna Dinner, wagged it in front of me and said, “This stuff really is good!” A lady standing behind us looking for personal hygiene products on the other side of the aisle just snickered, but I took him at his word. Some people treat Larry’s products as a joke, but they decidedly are not.

“Larry” was born Daniel Lawrence Whitney in Pawnee City, Nebraska on February 17, 1963, where he was raised on a pig farm. He graduated from Berean Christian School in West Palm Beach in 1982, went to college at Baptist University of America, and the University of Nebraska, crediting his roommates from Texas and Georgia for inspiring his imitation Southern accent. He dropped out after his junior year after trying his hand at comedy. Whitney started his career in radio in the early 1990s and became famous after developing his “Larry” character, a personality he employs in his stage act. Larry the Cable Guy has a stereotypical blue-collar appearance and a thick Southern accent, recounts stories about his “family,” and uses, among other common expressions, his own catchphrase “Git-R-Done!”.

Some time ago, Whitney partnered with Bektrom Foods, a manufacturer of baking mixes, oatmeal, macaroni and cheese, stuffing, spices, skillet dinners, pasta salads and instant potatoes based in Monroe, Michigan and Colgate, North Dakota, to manufacture and market the licensed brand “Larry the Cable Guy”. The brand includes almost 30 products including breads, batters, gravies, seasonings and “one-dish” dinners. Whitney’s line of food products supports his non-profit, The Git-R-Done Foundation, which was set up by Whitney and his wife to help others in need. “The foundation’s mission is to provide assistance to charitable organizations for people who have experienced hardships beyond their means, with an emphasis on children and veterans.” The Git-R-Done Foundation and Whitney have given countless hours and donations to places like the Arnold Palmer Foundation, Madonna (not THAT Madonna, children) Rehabilitation Hospital, Operation Homefront and the International Hip Dysplasia Institute.

Sure, you’re not going to find Larry the Cable Guy’s products at a Whole Foods location, and if you’re on a low-carb diet, most of his products aren’t going to be on your table very often. But these products are every bit as good as Betty Crocker’s Hamburger Helper, and you can bet that old bitch Betty ain’t giving any money to children and veterans. 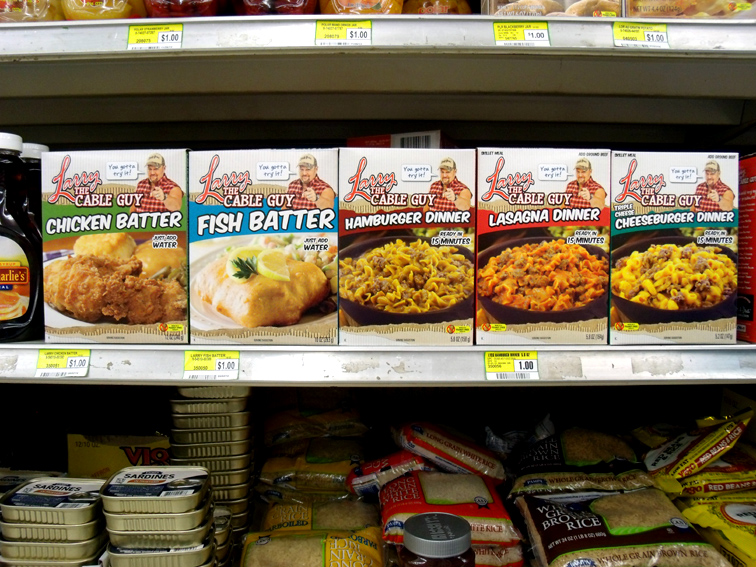