Great cakes don’t come out of a box. No, they come from handwork, sacks and shells, from old tried-and-true recipes and those who have made them. Such cakes are not only worthy of serving to family and guests, but they’re also fun to make. Most of the best of them involve complicated procedures that aren’t that time-consuming at all if you’re a dedicated home cook in the first place, and pulling a perfectly-cooked cake out of the oven is a simply unmatchable experience. After beaming at your creation for a few minutes, you get to decorate; the cake is your canvas, and you are the artist of this most temporary of masterpieces.

Legend has it that the original recipe for the red velvet cake is from the kitchens of the Waldorf-Astoria, but there’s no solid opinion on that. The cake became popular here sometime after World War II, when the South began to become much more a part of the nation as a whole. Me, I think that the red velvet cake is a variation of the old devil’s food cake and that the name changed because many good religious women were just not going to bring Satan’s bounty to their tables. It has the same texture, and while no cocoa is used in the icing, the cake’s primary flavoring is cocoa. This is a family recipe, one of the dozen or so I still have from my mother’s hand. I’m almost sure she got it from her grandmother Eula, who came from a line of exceptional cooks. Her sister, my Aunt Leila, became legendary for her cakes, pickles and preserves. They were all very strict Baptists, and I suspect they were among the ones who would simply not feed their folks devil’s food; doubtless they didn’t want to nurture what they knew was a genetic predisposition for devilment. (It didn’t work.)

Two elements of this recipe betray its age. First is that it employs a “boiled icing”, meaning an icing that is produced pretty much in the way you would make a sauce or a gravy, by heating starch in a liquid. In some cookbooks, this is referred to as a “roux icing”, but it’s a very raw roux indeed. The advantage to this type of icing is that you don’t have to warm it to ice your cake (in fact it needs cooling), and it tastes so much better than that lard and confectioner’s sugar gloop you get at the supermarket. Second is the leavening, which involves that chemistry set action of putting baking soda in a bit of vinegar and watching it foam. The acidic buttermilk in the batter provides additional frothing and the end result is, well, velvety. Many of you will probably take issue with the amount of food coloring involved, but try to relax; besides, it’s so much fun dribbling that red food coloring into your white batter and swirling it in. The absolute best part of course is eating it. If you really want it good, wrap layers in wax paper individually overnight before frosting. 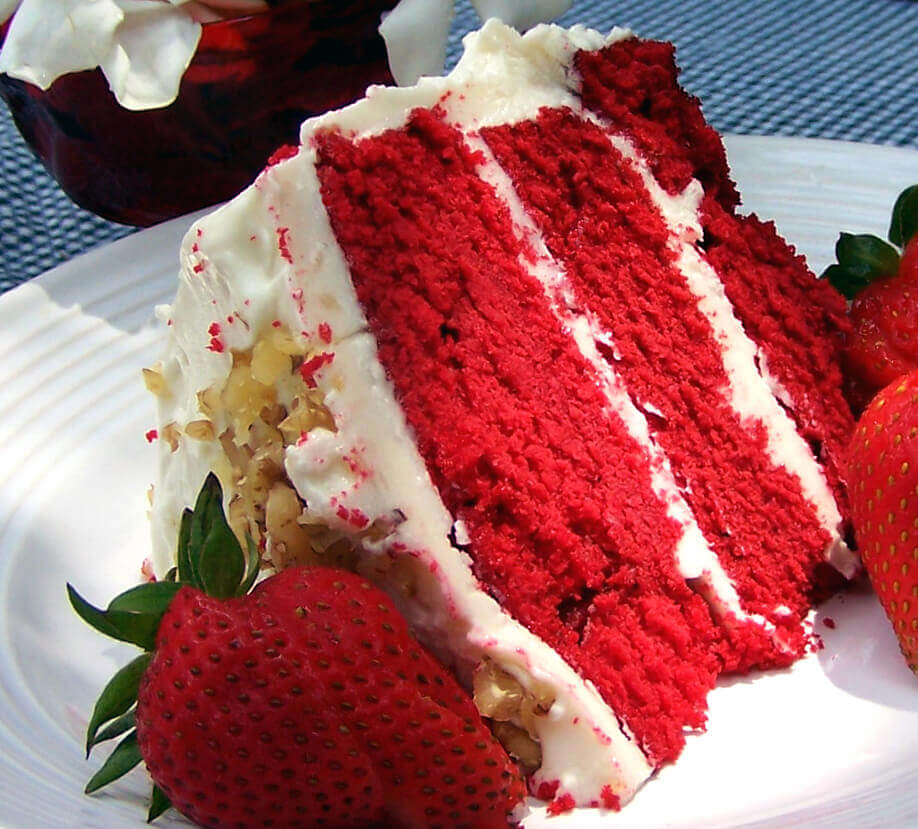