Cornbread is the South’s oldest icon. My Choctaw ancestors were making bread from maize long before the rest of my DNA was run out of the British Isles. The Choctaws made what is called shuck bread, or “bunaha”, by mixing water and cornmeal into a stiff paste, forming the paste into balls, wrapping them in cooked corn shucks and boiling them for about an hour. They stored well and were reheated by boiling before serving. The early settlers made a simple type of cornbread by mixing meal, water, salt and lard into a batter and cooking it on a flat metal surface like a pancake. These are called hoecakes or dogbread. Much later came what we know as cornbread. Or at least what I know it as.

When it comes to cornbread, I labored long under the impression that I was a confirmed orthodox. Yellow corn meal? A quarter cup of sugar? Nuh-uh, no way. That’s not cornbread, that’s corncake. A recipe using yellow meal, sugar and even (horror of horrors) butter just has Yankee written all over it. A Michigan-born hostess once served me such bread, and I’m sorry to say I was so rude as to point out what a culinary abomination it was. She set me in my place by being quite gracious about my gaffe, which made her a lady, and after dinner her husband offered to punch me in the nose, which made him a gentleman. (We still exchange Christmas cards.) I once ran up on a California recipe for cornbread using vanilla flavoring that confirmed a whole slew of suspicions I’d long harbored about the frivolity if not to say instability of the West Coast mentality. I’ve also come across recipes with dill, cheddar cheese, yogurt, skim milk, blue corn meal, creamed corn, and even (I swear to God) tofu. What passes under the name of Mexican cornbread is subject to all manner of atrocities, the most bizarre of which I’ve found includes beef jerky and cactus flowers.

As a confirmed orthodox, I thought I was sitting on the front pew with my recipe, which has only white meal, just a little flour, eggs, buttermilk, salt and baking powders. But I found out that there are those who would cry, “Backslider!” at the thought of using bleached meal or even eggs. I just had never considered making cornbread without eggs, then I found that among the recipes you see printed on most meal packages you see this is called “egg bread,” and my faith began to falter. These no-egg purists, I began to believe, were true cornbread devotees who enjoyed a more chaste form of elemental Southern sustenance. I felt horribly decadent, which was not such a new sensation for me, but a cornbread recipe certainly was a novel indicator of my moral turpitude (more official records exist). I got over it. After all, I had learned how to make cornbread at my mother’s knee, and she was a queen among cooks: “Honi soit qui mal y pense”, you heathen peasants.

To make cornbread, put about an eighth of an inch of oil, corn or vegetable, in the bottom of a proper skillet, and stick it in the oven at about 450. Then take one and a half cups of white self-rising corn meal and about half a cup self-rising flour, mix in a bowl with a scant teaspoon baking soda and a dash or so of salt. Add about 1/3 cup of corn or vegetable oil and mix with dry ingredients until about the consistency of rice. Add one large beaten egg, mix well, and then add enough buttermilk to make a thick batter. Add just a couple of tablespoons of water to this to thin slightly; this enables the meal to swell and makes for lighter bread. Take your skillet out of the oven, tilt to coat the sides with oil, and test the oil with a drop of batter. It should sizzle a bit; if not, heat some more. When oil is sufficiently hot, pour in the batter and put back in oven. Bake until golden brown. Remove by inverting skillet. If your skillet is properly seasoned and your oil was hot enough, the cornbread should just pop out of the skillet with a fine brown crust. Eat with butter immediately and enjoy being alive. 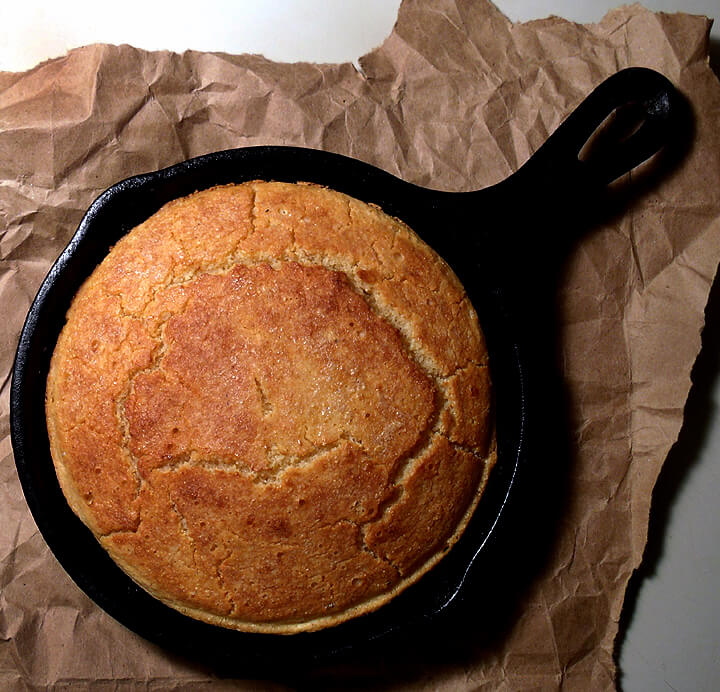