In the culinary sphere it’s not unusual for chefs of one ilk or another to turn a hayseed staple into a Broadway entrée. Examples abound; swear to God, we’ve seen black-eyed peas made into everything short of cupcakes with sweet potato icing (don’t you dare!), and if I run up on one more gourmet recipe for fried green tomatoes I’m going to take a skillet to somebody.

Well, so be it. Most basic recipes are open to elaboration, and every cook has a twist; a pinch here, a dash there, a pot for this, a pan for that. The possibilities are endless. If the cook’s intentions are honorable, meaning that his or her primary concern is with how a dish tastes, all the better. But if you’re putting a heap of crab seviche over a batch of cold butter bean fritters just for the novelty or so you can charge six bucks more, that’s just wrong.

Capote once said of writing that you must learn the rules before you can break them, and this is true of cookery as well. Be “original, not outrageous,” Alice B. Toklas cautions. Her advice is especially valuable for those of us who cook at home, because most people prefer the familiar to the exotic, and even slight variations in a favorite dish might give pause to your most appreciative audience. (If you really mess up, you might find yourself on a bus to Batesville.)

Back-to-basics movements happen from time to time because they cleanse the palate of all accumulated froth or frippery and help us remember why we liked something in the first place. The Outlaw country music of the 70s made “Sleeping Single in a Double Bed” sound operatic. Now y’all know I love that single, and I love Barbara; she was just overproduced for profit at the time, which is the point I’m trying to make. Southern food staples are falling victim to the same marketing mojo as that banjo-pickin’ little girl from Houston, and it’s just sad.

M.F. K. Fisher has a recipe for salmon pancakes (i.e. patties) in How to Cook a Wolf, which is very much a solid recommendation for their goodness, but you’ll rarely if ever see them on a restaurant menu for the simple reason that with the exception of tuna salad, dishes made with canned fish are not considered marketable commodities.

My father liked to cook a big breakfast on Sunday mornings, and he always made salmon patties. He said that his mother used to make them with jack mackerel, always adding that we should be grateful he went to law school so that he could afford to feed us salmon; for him, a child of the Depression, that was a step up in the world. Mackerel patties are almost every bit as filling and nutritious as salmon, but take it from me; they’ll make your house smell like a hot wharf for a week or so depending on your upholstery.

I’ll not lie to you; these cakes taste best when fried in lard, or, even better, bacon grease. If that makes you clutch your chest, use Crisco. Trust me, though, olive oil just isn’t right, and butter won’t take the heat. Most people I know make salmon patties with flour, but cornmeal gives a crispier crust and a better inside texture (flour tends to make it a bit gummy).

Some nights the winds from the hills reach me in this mean, dirty old city, and I find that can of salmon back up in the cabinet, heat up a skillet and make the thing that sings most to me of home. In the end, no matter who you are or where you’re from, it’s our childhood foods we cherish most.

One 16 oz. can of pink salmon makes 4 to 6 cakes. Drain fish, reserving two tablespoons of the liquid. If you’re squeamish, remove the skin and bones, but I leave them because of the added nutritional value. Mix well with one beaten egg, the reserved liquid from the can, and about a half cup chopped green onion. Add enough white corn meal or bread crumbs to make a thick batter. You should need very little salt; I like plenty of black pepper in mine. Form into patties and fry in at least a quarter inch of oil. Brown on both sides, then place in a very warm oven (about 300) for about ten minutes to crisp the crust and ensure a cooked inside. 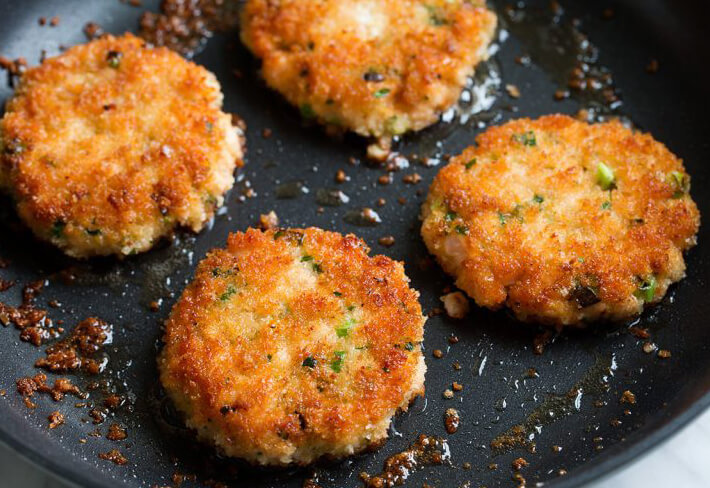 4 Replies to “A Southern Fish Cake”