Once touted as “America’s grandest contribution to the pasta repertoire”, pasta primavera was invented in New York at Le Cirque in 1977, and according to the ineffable Craig Claiborne soon became “by far the most talked-about dish in Manhattan”. The dish remained popular throughout the Eighties and today is almost cliché, but for all its snooty pedigree is still a good standard for the home kitchen.

A simple dish, primavera is pasta with spring vegetables from the kitchen and garden along with what’s fresh in the market, all cooked with a cream reduction. A reduction simply means that you simmer the cream until thickened to a consistency that will coat the pasta and vegetables as in an alfredo, and quite frankly a primavera is little more than an alfredo with vegetables. Most often a dry hard cheese such as Parmesan or Romano is grated into the cream for added flavor and a heavier consistency. You’ll have to blanch most non-leafy vegetables beforehand, and while some people will advise you to assess vegetable ingredients before making a decision about the type of pasta you should use. I can’t begin to express how over the top this is, and thankfully spaghetti noodles are the norm.

Sauté cooked pasta and blanched vegetables along with a bit of minced garlic and scallions in enough butter to coat, seasoning lightly with salt and pepper, then add heavy cream along with a light sprinkling of your choice of cheese. Simmer until cream begins to thicken, adding enough to coat both vegetables and pasta. It helps if you’re practiced in tossing the mixture, but a spoon or (better yet) tongs work in a pinch. I used fresh spinach, tender young summer squash, carrots, broccoli, Brussels sprouts and angel hair pasta. 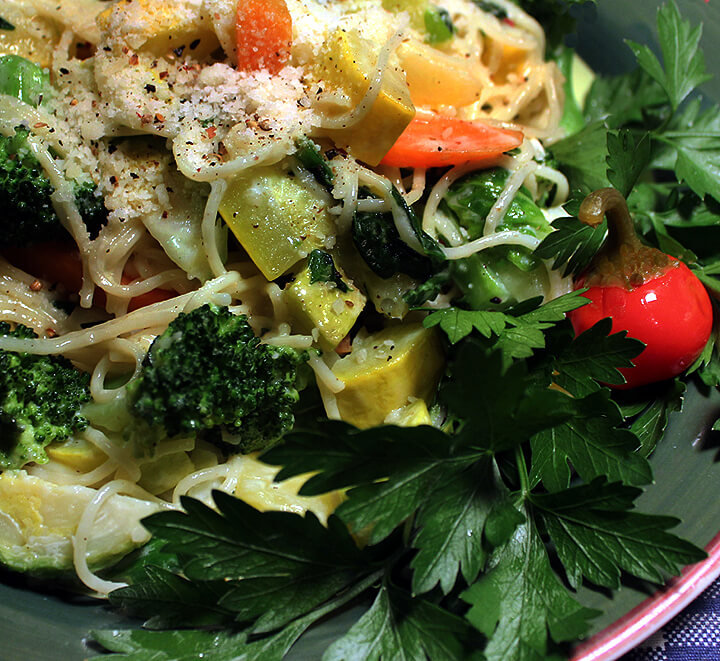 At Clancy’s in Yazoo City, one of the best barbecue joints in central Mississippi, they serve what they call a ‘Roadkill Chef’, with the usual greens and vegetables along with your choice of four meats: turkey, ham, pulled pork or smoked chicken.  Now, you can order a roadkill salad in damn near any restaurant in the western hemisphere under the name ‘chef’, but viaphagia (much as geophagia) has become something of a Southern in-joke, and the good folks at Clancy’s offer it in the same jocular spirit restaurants in Oregon might offer a Sasquatch salad with fruits, nuts, roots or sprouts. 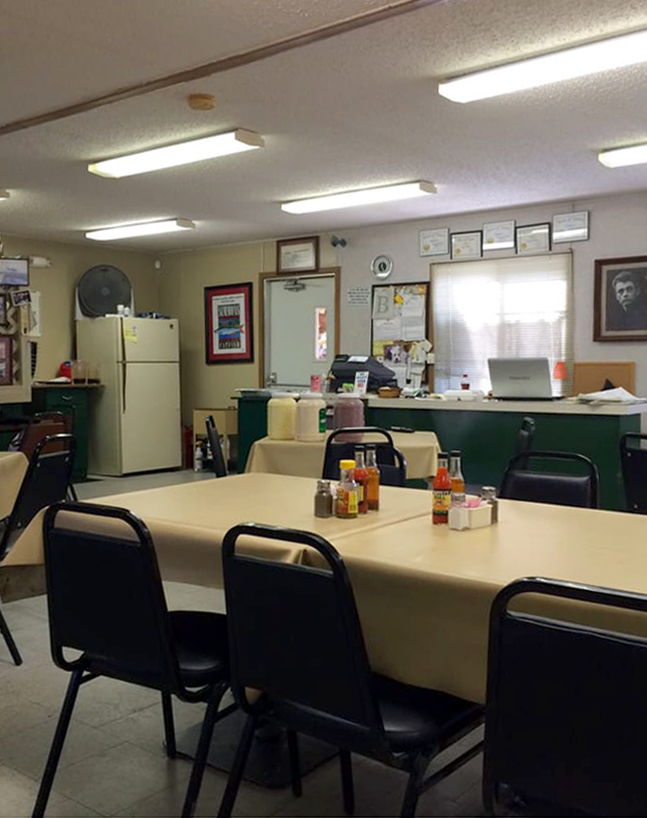 Mexico has almost six thousand miles of coastline—about half of the estimated total for the U.S.—but mollusks don’t seem to play a proportionate role in the country’s cuisine. Kennedy includes only one recipe for scallops in her classic Cuisines of Mexico, a cebiche, and not a single one for oysters. This is not to say that oysters and scallops aren’t eaten in the country, simply an observation that no single indigenous recipe for them has become familiar to the world at large. However, recipes for salt-water fish abound, one of the most distinctive being red snapper Veracruz (huachinango a la Veracruzana), a rich, colorful dish with dozens of variants, but all using tomatoes and chilies in various proportions.

This scallop recipe is a riff on that staple, though lighter and more intense. First, if you’re using frozen scallops, you must thaw them and squeeze out the excess water that inevitably makes its way into the meat. Even after doing this, you’ll find the scallop muscles will exude a lot of moisture when exposed to heat, so a preliminary sauté is necessary. Once the scallops are firm, coat them with pepper a bit of salt and the lightest dusting of plain flour. Brown in the least bit of oil possible, then add by spoonfuls this salsa, along with jolts of fresh lime juice and perhaps a bit of garlic. The scallops should be pungent, piquant, highly aromatic and served with cucumber or melon. 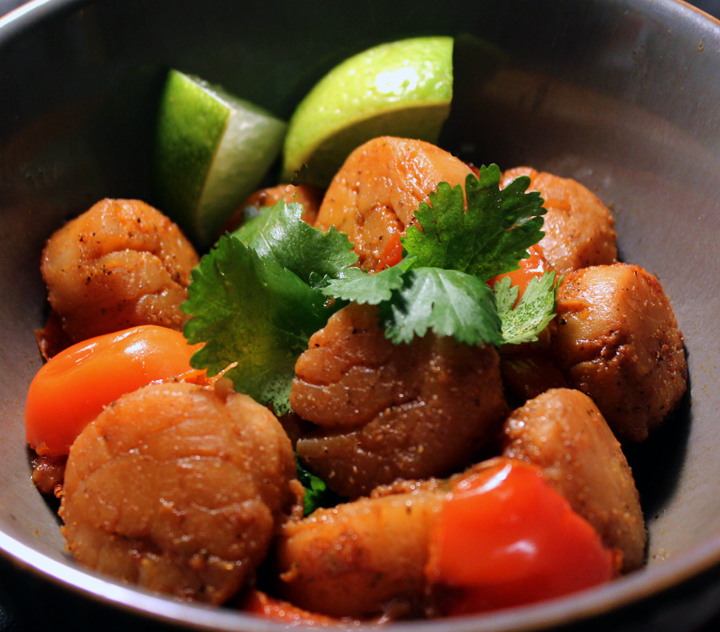 Fannye Addine Cook was born in Crystal Springs, Mississippi on July 19, 1889. By that time, Mississippi like most of the South was catastrophically being stripped of the great virgin forests that stretched from east Texas to tidewater Virginia. In A Turn in the South, V.S. Naipaul spoke with a woman in Jackson who said, “When I was a little girl—say in 1915—they were still clearing (the forests). They would go and chop around these mighty oaks and they would then die and they would cut them. When they were going to clear out a field they would kill the trees. I never paid any attention to it. It was what they did.” As James Cummins notes in his Preface, “the blackland prairie of eastern Mississippi had been cultivated to less than one percent of its former size, “White-tailed deer, Louisiana black bear, American alligator, wood duck, and other species were nearly eliminated by lawless exploitation. Streams and rivers were choked with eroding soil. The idea of caring for the land and its community of inhabitants, what writer and ecologist Aldo Leopold called a ‘land ethic,’ had not taken hold in Mississippi.”

That this biography of Fannye includes in its first few pages the following vivid documentation of passenger pigeons in Mississippi strikes a strong, graceful and resounding note against a lack of consideration for the natural world. The passenger pigeon was once the most abundant bird, perhaps even the most abundant vertebrate, on the planet. Audubon once watched a flock pass overhead for three days and estimated that at times more than 300 million pigeons flew by him each hour. But these birds were slaughtered unmercifully during the 19th century, and after a description of one massacre, Audubon wrote, “Persons unacquainted with these birds might naturally conclude that such dreadful havoc would soon put an end to the species. But I have satisfied myself, by long observation, that nothing but the gradual diminution of our forests can accomplish their decrease, as they not unfrequently quadruple their numbers yearly, and always at least double it.” From this perspective, these numbers seem incredulously inflated, yet as the slaughters continued and the forests fell–particularly the great beech woods of the Ohio Valley–the passenger pigeon declined in number with proportionate rapidity, and their extinction was sealed by the death of the last known member of the species, a female named Martha (after the first First Lady) that died on September 1, 1914 at the Cincinnati Zoo.

Libby Hartfield, former director of the Museum, said, “Cook’s passion for wildlife conservation continued to the end of her life. The day before she died in April 1964, at age 75, she led a group of young people on a bird-watching expedition.” Though many of Cook’s specimens at the old Jefferson Street museum were destroyed by water during the 1979 Jackson flood, her documents and other materials form the core of the 18,000-volume library in the Mississippi Museum of Natural Science. It was there I sought information about the last passenger pigeons in Mississippi. A long-time librarian at the Mississippi Museum of Natural Science, Mary Stripling, provided me with this information concerning passenger pigeons in Mississippi. “Jesse,” Mary wrote, “You are grasping at straws looking for the last one sighted in Mississippi.” She then cited several primary resources for more information, and also gave me the last sight records in their collection, adding that they appear to be handwritten by Miss Cook herself.

Year:  1848; Observer:  T. J. Pierce; Place: Brookhaven – Bayou Pierre. “One fall the pigeons came one afternoon by the thousands. There were so many and they were so thick the sun could not be seen and they darkened the sky. They flew low, many of them only 10 or 12 feet, so low that they could be knocked down with brush. They settled in the trees just on edge of grandfather’s farm and weighted them down. Many men and boys went out and shot them to eat — meat dark about like guinea. Only this one time were they seen there.”

Year : 1878; Observer: G. M. Cook;  Place: Copiah County – Utica. “Still a good many pigeons in Pearl River swamp and on hills. Daddy killed several at one shot out of a flock of about 20 in the top of a big pine tree over 100 ft. high (short leaf pine). In 1858 very large flocks so large and so low that Daddy and other school kids would run thru them with arms spread. The birds moved out of their way just far enough to keep from getting caught by the children.”

Undoubtedly straggling bands of passenger pigeons survived in Mississippi for  perhaps a decade afterwards but were likely exterminated–or perhaps simply expired on their own out of sheer loneliness–well before the turn of the century. Yes, I was grasping at straws, but I knew where to look for the information I needed about the natural world in the state of Mississippi and thanks to Fannye Cook I found it. Whether you’re a hunter, a hiker or just someone loves Mississippi, buy this book, support local conservation groups and take care of your piece of the planet. Above all, remember Martha.

In my book—albeit unpublished—Sunday evenings are appropriate for substantive egg dishes, omelets and their ilk, which are on the whole light, versatile and easily prepared. This old Asian fusion dish—Chinese-Indonesian /British/American, what have you—fits the bill. The name derives from Cantonese for “hibiscus egg”, and in Asia is usually served with a sweet-and-sour sauce, in the western hemisphere more often with a simple brown gravy.

For each serving, beat two large eggs loosely; I (for one) think it’s important that the whites are still visible as a component in the final product and use more oil than you would for an omelet. Pour the eggs onto the hot oil and working quickly with a fork pull the eggs apart as they cook until the mixture is almost firm, then add your ingredients; here I’ve added shrimp, scallions and bean sprouts, but ham is frequently used, as is pork, chicken, cabbage and mushrooms; the only omelet-y ingredient you’ll not find in a foo young is cheese.

After the additions have cooked into the surface of the eggs, flip the ‘cake’ and cook to light browning. Use your favorite brown gravy recipe, making it on the thin side. 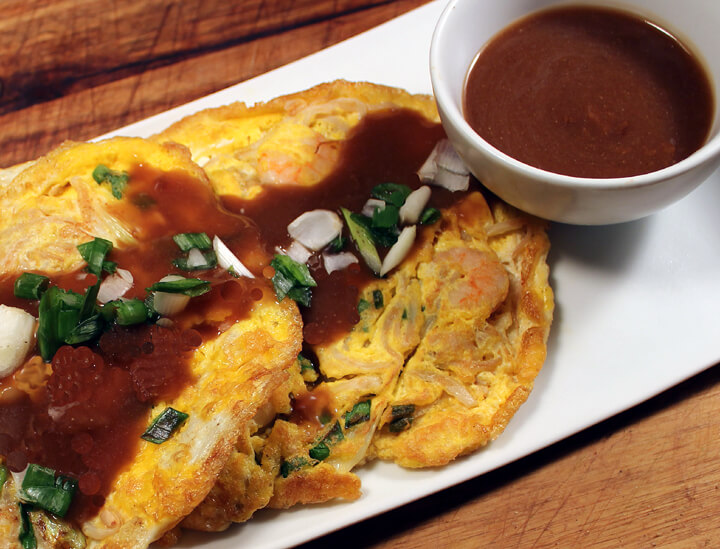 He was wealthy, born to wealth, with a wife and children in a mansion on St. Charles, land from Natchez to Memphis, a man of taste and discretion, well-schooled in the ways of the world.

She was famous, born to poverty, with a man who beat her and a red leather trunk containing everything she owned, a woman-child of the sort you find with a stage for a cradle, knowing nothing of the world beyond footlights.

But before the lights she shined, and oh, how she sang. One night as she did, moving the very air with her presence, the man with the mansion on St. Charles sitting in an upstairs box smiled knowing not only that his heart had been plucked from his chest but that she held it in her hand.

No, no, the story doesn’t end with her moving into the mansion or even with him setting her up in a nice walk-up on Ursuline. It ends with him keeping her for a dazzling week before the revue—now the musical comedy ‘In Dahomey’—swept her to Manhattan, London and other arms.

And the man? Ah, the next year he bought another lot of land in the Mississippi Delta, in Bolivar County, 24,000 acres, at a time he largest cotton plantation in the world, and he smiled when he signed the deed, naming it for her. 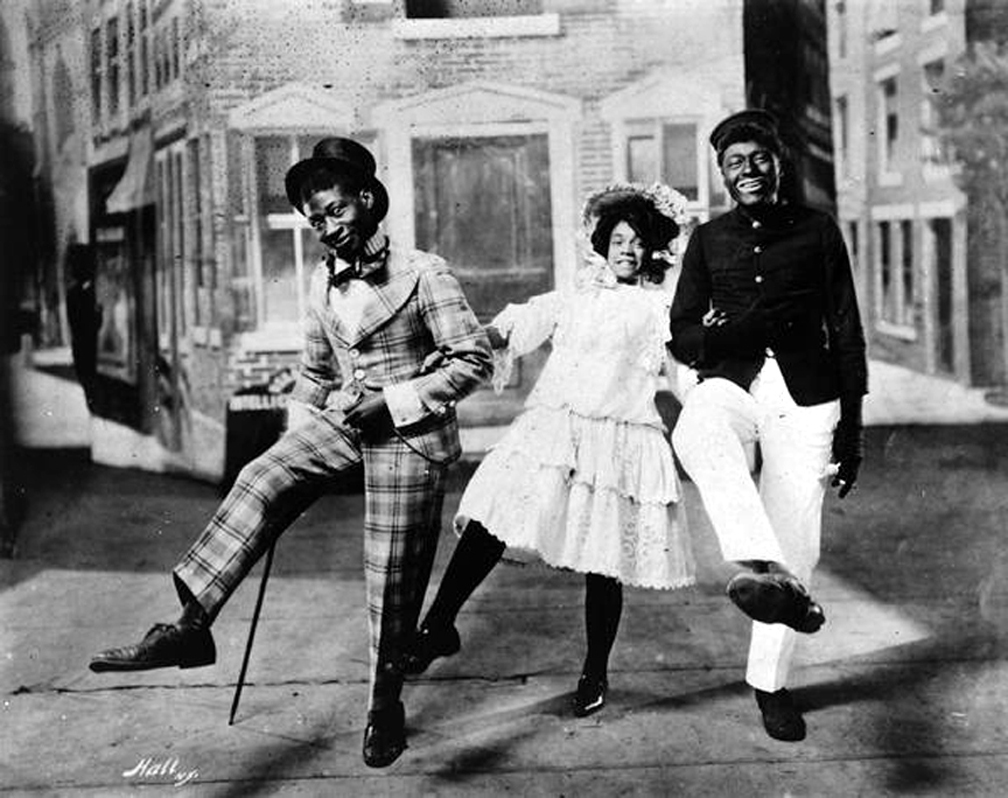